(Minghui.org) As the coronavirus outbreak turned into a pandemic, Singapore imposed stringent measures to stop the spread. Despite this, local Falun Dafa practitioners continued to receive requests from the public to learn the practice.

The Singapore Falun Buddha Society organized a small scale Chinese and English Falun Gong nine-day workshop from September 18 – 27, 2020. On the last day, everyone talked about their experiences. The veteran practitioners gave the new practitioners some suggestions and encouraged them to study the teachings. 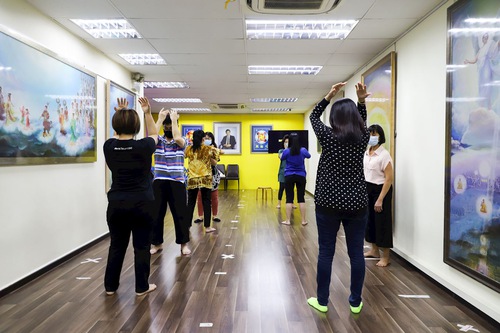 “I Regret Not Knowing about Falun Dafa Earlier”

Ms. Pamela was very grateful to participate and said, “Thank you Master! Thank you to the two veteran practitioners who clarified the truth about Falun Dafa and showed me the beauty of Dafa. Thank you to the workshop volunteers for teaching me the exercises so patiently.”

Ms. Pamela said that before attending the workshop, she started doing the exercises at home, and the pain in her leg that had bothered her for years improved significantly. The pain in her abdomen and back also disappeared. She regrets not knowing about Falun Dafa earlier. Her husband recently passed away from diabetes and she felt that it was a pity that he did not get to know Dafa.

Ms. Pamela said, “I want to tell our respected Master that I will cultivate diligently, do the three things well and not let Master down.”

“The First Exercise That Appeared Was Falun Dafa!”

Mr. Ken said that he searched online for an exercise and the first one he saw was Falun Dafa! He knew that his neighbor practiced, but he read some negative reports about Dafa, so he was skeptical. This time, after reading the introduction to the practice online, he decided that he wanted to know more. As he kept reading, he wondered, “What is so bad about this exercise? It's good!” He started to learn the exercises online.

When Mr. Ken first started reading Zhuan Falun he had some questions. He kept going and began having some amazing experiences. He felt Master was encouraging him and every time he read theteachings, he gained new understandings.

Ms. Caiying said that she used to wonder: “There are so many religions such as Christianity, Buddhism, Taoism, etc, but which one is good?” She also read books about cultivation, but after reading them, felt something was missing.

Ms. Caiying was very curious about Falun Dafa. She wondered why the Chinese Communist Party (CCP) persecuted the practice. She was deeply impressed after reading the first chapter of Zhuan Falun. When she read the other books about cultivation, none of them answered her questions, but Zhuan Falun did. When she went online, she noticed information about a nine-day workshop, and signed up. After attending it she said, “It felt very good and I found the answers to many of my questions.”

Ms. Chen Hui Ying said that her brother shared his Falun Dafa books and music with her and encouraged her to practice. After reading Zhuan Falun and listening to the music for a while, she stopped. When she started to listen again, her interest grew until she found herself listening to the music throughout the day. She started to learn the exercise movements from the DVD, and later contacted the local practice site. Her exercise movements improved, and she joined the other practitioners at the park to do the exercises every Sunday.

Ms. Chen said that when she heard a nine-day workshop would be held, she immediately registered for it. She said that she was able to correct a lot of her wrong movements during the class and the quality of her sleep improved greatly.

Ms. Chomil first heard about Falun Dafa from a practitioner in India. She admired his graceful movements while he did the exercises and thought the practice was very peaceful. He explained that Falun Dafa's cultivation principles are “Truthfulness, Compassion, Tolerance.” Ms. Chomil said that she wanted to learn the exercises and he told her, “Most countries have a Falun Dafa practice site, you can go online to check it out.” When she went online, she saw that a nine-day workshop would soon be held.

When she phoned the contact number, she spoke to a Chinese practitioner who did not know English. They were not able to communicate, so Ms. Chomil thought she had to return to India to learn the exercises. The words “Truthfulness, Compassion, Tolerance” frequently appeared in her mind and this motivated her to learn how to do the exercises and cultivate. She phoned the other contact number and spoke to an English-speaking local practitioner. Over the course of 9 days, whenever she find it difficult to learn, the principles “Truthfulness, Compassion, Tolerance” kept encouraging her to continue.

Ms. Duyen recently moved from Vietnam to Singapore. Two years ago, she talked with practitioners while traveling in Germany. After returning to Vietnam, she became sick, but medication did not help. Later, someone suggested she try Falun Dafa. She feels that Falun Dafa is not only good for her body, but also beneficial to her mind and soul.