(Minghui.org) Falun Dafa (also known as Falun Gong) practitioners in Toronto expressed their gratitude and wished their founder, Mr. Li Hongzhi, a Happy Mid-autumn Festival. They clarify the truth and tell people about Falun Dafa by demonstrating the exercises; holding banners outside the Chinese Consulate, Chinatown, and tourist attractions; and helping people withdraw from the CCP (Chinese Communist Party). 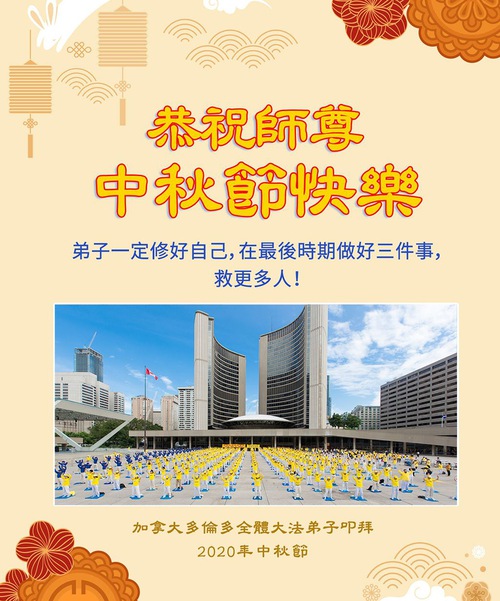 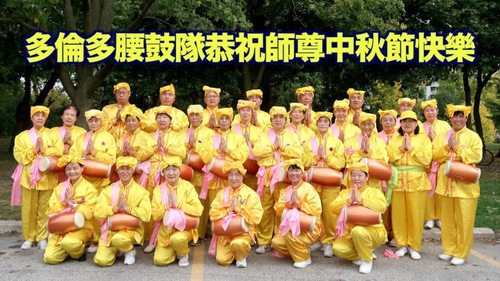 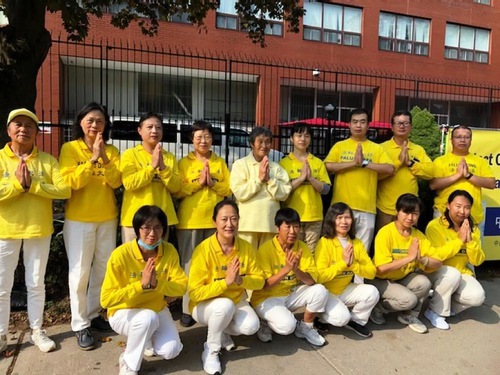 Practitioners who clarify the truth at the Chinese Consulate in Toronto wish Master a Happy Mid-Autumn Festival. 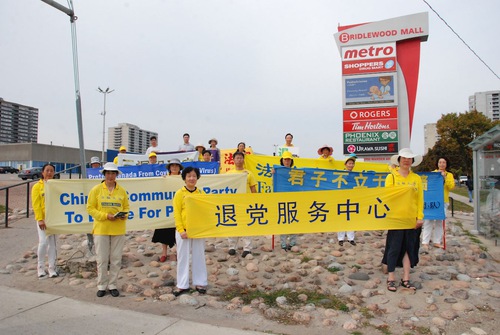 Practitioners on the “Quit the CCP” team in Scarborough, Toronto, wish Master a Happy Mid-Autumn Festival. 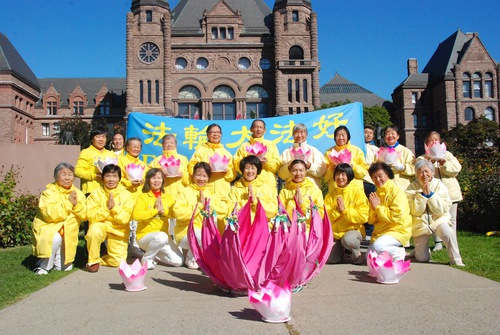 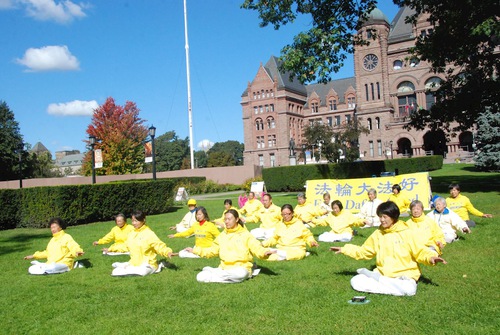 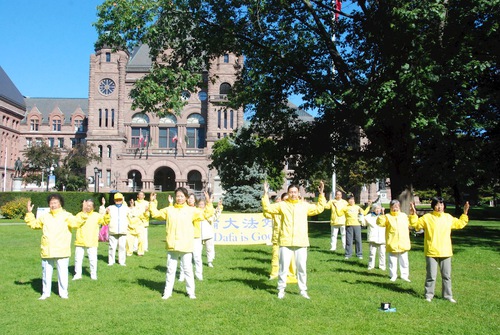 Practitioners who clarify the truth at Queens Park in Toronto wish Master a Happy Mid-Autumn Festival. 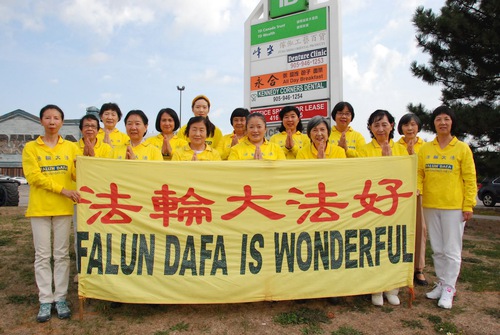 Practitioners who clarify the truth at Pacific Mall in Toronto wish Master a Happy Mid-Autumn Festival. 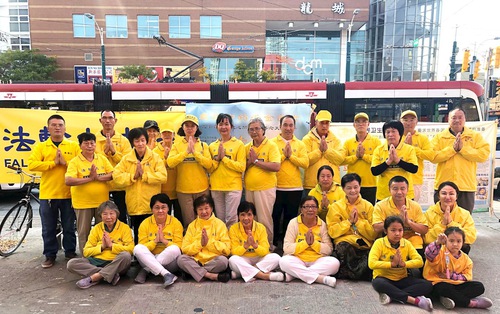 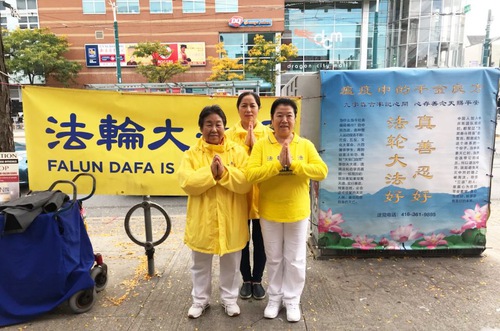 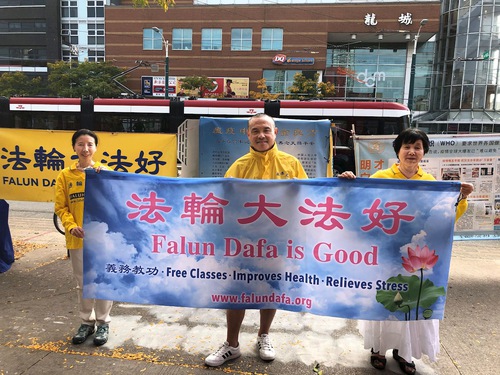 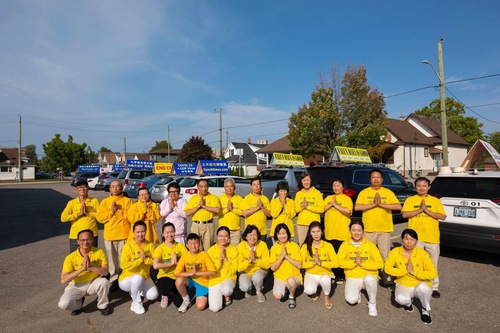 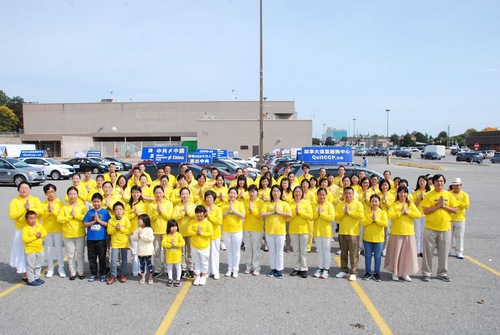 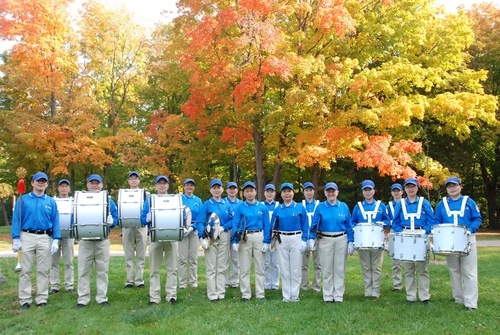 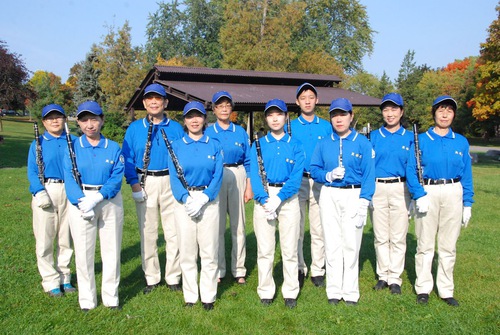 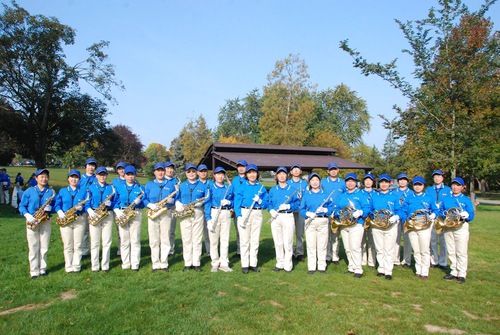 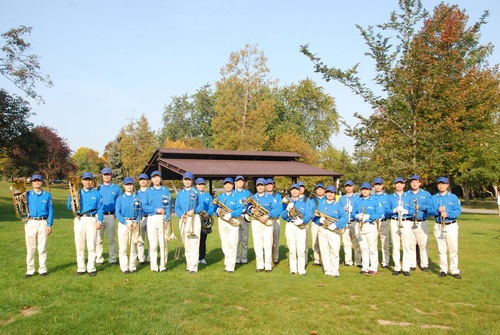 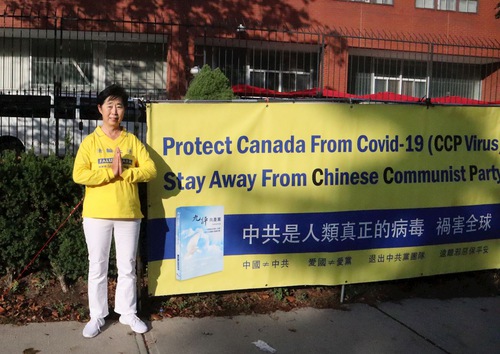 Chinese consulates are the CCP’s overseas bases of operation. Ever since the persecution began, the CCP has used them to extend the persecution outside of China. Falun Gong practitioners are there every day to clarify the truth.

Ms. Pan Xuefeng is one of the practitioners who goes to the Chinese consulate every day to tell people about the persecution.

Before Ms. Pan began to practice Falun Gong in 1997, she had several different ailments, including heart disease, sciatica, and heavy menstrual bleeding. All of them were resolved, and many of her relatives and friends who witnessed her health recover began practicing.

After the CCP launched the persecution, Ms. Pan was illegally arrested and detained several times. She was tortured in a forced labor camp and even injected with unknown drugs. But she never wavered in her belief in Dafa and Master.

After coming to Toronto in 2010, she began to clarify the truth in front of the Chinese Consulate. Ms. Pan said, “Chinese people are gradually awakening, and more and more people now know just how evil the CCP really is. In the past, most Chinese were indifferent to us, and some even cursed us. These last two years, this seldom has happened. Although some still refuse to listen, they are now more polite. More people have further awakened since this pandemic began. They are now willing to know the truth. Sometimes dozens of people ask to quit the CCP and its affiliated organizations.”

On the occasion of the Mid-Autumn Festival, Ms. Pan Xuefeng wants to say, “Thank you, Master Li, for your compassion and for saving us. Thank you for giving us the opportunity to save more people. I will do the three things well!”

The Luckiest Person in the Universe 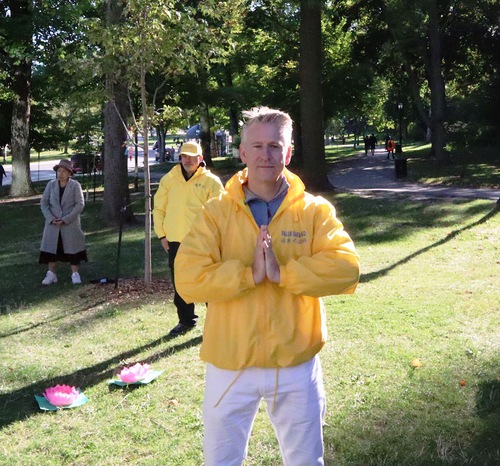 Scott goes to Niagara Falls to clarify the truth with fellow practitioners on weekends. He said, “Even if there is only one person who comes to learn the exercises, I will continue to spread the truth of Falun Gong. I am the luckiest person in the universe, and I want more people to be as lucky as I am.”

Before he knew about Falun Dafa, his life was troubled. “Like most people, I pursued a career. But in 1992, my life changed. I got divorced. I was heartbroken, and I started drinking and smoking. I became depressed.

“I wanted to know the meaning of life.” He began to try different forms of meditation and study different spiritual theories. In 1999 one of his friends told him about Falun Dafa. He said, “I still remember that day. My friend who meditated with me said he discovered a genuine practice. It was also free. We went to the practice site and learned the five exercises. When I started practicing and reading the Dafa books, I could feel magical things happening. However, it took me about ten years or so to truly start practicing, because I was born into a family of observant Catholics.

“When I started to practice, I immediately realized the difference between Falun Dafa and other cultivation practices. It was amazing. I realized that this was righteous. So I immediately gave up all the things I’d learned before. I felt reborn. I used to smoke and drink, but I gradually gave up all my bad habits. My personality also changed. The good side has been strengthened, the bad things have gradually disappeared.”

His family encouraged him to practice. “My mother is a Catholic, but she can see that I'm healthier and happier. I have also become more considerate of others. I had to use an inhaler for my asthma for about 40 years. Soon after I began practicing, I no longer needed the inhaler. Since then, my mother has supported me to practice Falun Dafa. She calls me every week to make sure I keep practicing and studying the Fa every day.”

On the occasion of the Mid-Autumn Festival, Scott expressed his gratitude to Master. He said, “I will continue to practice diligently. Thank you, Master, for taking care of me and being patient with me. Dafa has purified me and eliminated a lot of bad things. I will never give up practicing. I owe my life to Falun Dafa. I am very grateful to Master.”

Nothing Can Stop Me from Saving People 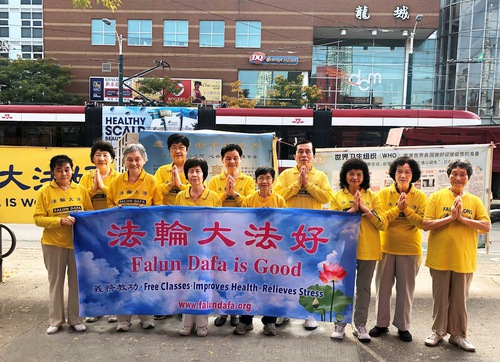 A friend told Ms. Zhou Chuanying, who is 76, about Falun Dafa in 1998. Before she began practicing, she suffered from stomach ulcers, hemorrhaging, neurasthenia, and other ailments. “I tried other exercises because of my illnesses, but nothing helped. In 1998, I fell and became paralyzed. A friend suggested I try Falun Dafa. In less than three months, all my ailments disappeared. For the first time I knew what it was like to be illness-free. Dafa gave me a new life!”

After she moved to Toronto in 2001, she devoted herself to clarifying the truth. “I have talked to Chinese people in front of the Chinese Consulate, Toronto’s CN Tower, Chinatown, and other tourist attractions.

“I’ve gone all over the place to clarify the truth. When the persecution began, I sent forth righteous thought in front of the Chinese consulate from 8 a.m. to 8 p.m. every day and in all weather. Now I go out four days a week to clarify the truth. Since Master asks us to save people, we must do it well. It’s challenging to go out in the cold or heat. Sometimes I feel tired, but I am very happy. When I remember what Master has done for us, what I have endured is insignificant. Nothing can stop me from clarifying the truth and saving people.”

She also told about an elderly couple who were visiting relatives. “The gentleman asked a lot of questions. I explained the Communist Party to him. I told him how the CCP has killed millions of people, including in the persecution of Falun Gong, which began in 1999. He listened quietly.

“The entire time, his wife kept yelling at me to stop me from telling him the facts. But her husband kept listening and quit the CCP.”

Ms. Zhou did not give up on the wife. She said to her sincerely, “Sister, I’m doing this for your own good. It’s a blessing to know the truth.” The lady’s attitude softened. She finally listened and quit the CCP. In the end she thanked Ms. Zhou.

Ms. Zhou goes to tourist attractions during the day to clarify the truth. In the evenings, she talks to people in China on the RTC platform.

“I once called a police officer. He was afraid of being monitored over the phone. I told him that he must make the choice between good and evil. He understood and decided to quit the CCP’s affiliated associations with his real name.”

On the occasion of the Mid-Autumn Festival, Ms. Zhou Chuanying said, “Master, I will do the three things well and return home with Master.”

Practitioners thanked Master for his compassionate salvation. They will cultivate solidly and save more people.

“Beijing Woman Harassed for Her Faith, Has Blood Sample and Biometrics Forcibly Taken”