Copenhagen, Denmark: “The CCP Has Done So Many Bad Things”

(Minghui.org) Falun Gong practitioners go to Kultorvet Square in Copenhagen, Denmark, every weekend to introduce the practice and collect signatures on a petition that calls for an end to the persecution in China. The events were well-received by the locals.

They tell people about Falun Gong and expose the Chinese Communist Party’s (CCP) 21-year-long campaign of persecution. They also collect signatures for a petition that calls for an end to the persecution. 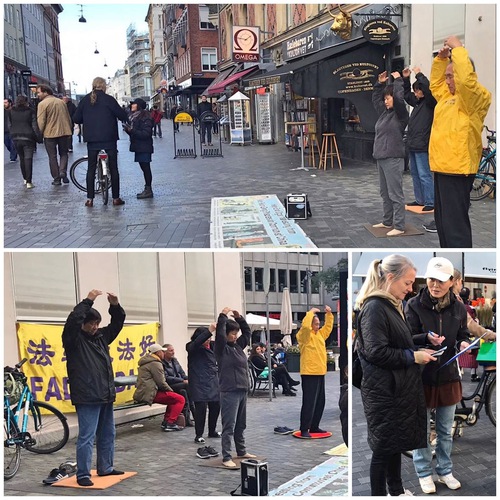 Two young Danish women watched the activities from a distance for a while and then walked over to sign the petition. They said they knew that the CCP has committed many terrible deeds.

A middle-aged woman said she knew about the CCP’s state-sanctioned organ harvesting from living Falun Gong practitioners. She signed the petition and left a comment, “Immediately stop the live organ harvesting and such inhumane cruelty.”

“How can we help you? Can we sign the petition?” a woman from Lithuania asked, “We are from a former communist country and know the evil nature of the communist party.” The woman was with her friend, who was also from Lithuania. The two women told the practitioner they had heard about the CCP’s persecution of Falun Gong and its live organ harvesting.

Many people expressed concern about China’s poor human rights record and the situation in Hong Kong. A man said, “The CCP does not allow freedom in China, including Hong Kong. I support you and all who are being persecuted.” He signed the petition and asked for a few more copies of fliers for his friends.

“I got a newspaper in my mailbox,” one of the women said. “It described in detail that the pandemic is due to the CCP. The CCP is so bad.”

Holm, who is in her 70s, watched the exercise demonstration for quite a while. A practitioner asked her if she was interested in the practice.

“I can feel the strong energy from the man in the middle of the front row,” Holm said, “I feel warm. It is marvelous.”

The practitioner asked Holm if she knew about Falun Gong and the CCP’s persecution. Holm said she knew about it, but could not grasp why the CCP wants to control people’s minds. The practitioner told her that the CCP had come from the West and had damaged the traditional culture of China. Controlling people’s minds is one way to sever the connection with traditional culture and enhance the regime's control.

Holm said one of her friends had studied in China and told her things that she thought were almost unbelievable. Holm signed the petition against the persecution.