Australia: “The Chinese Communist Party Is against Humanity and Must Be Stopped” 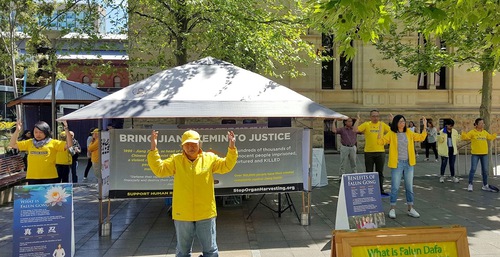 Practitioners demonstrate the exercises during activities held in Prince Henry Gardens on October 11, 2020.

Vietnamese: I Fully Support You

Mary Avina, a Vietnamese, told practitioners she appreciates them for persistently telling people about the persecution for years. 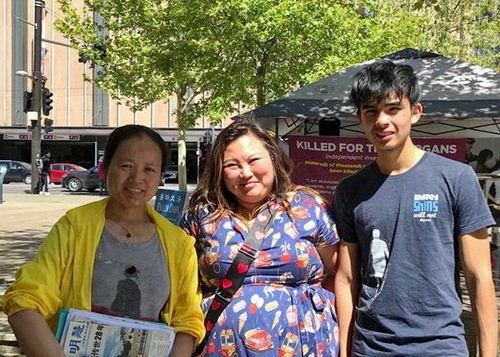 Mary Aviana (middle) and her son call for the CCP to end.

Mary said she knows how evil the CCP is. When she was a child her parents fled Vietnam to avoid being persecuted. She said most people cannot imagine how evil the communist party is and that it would persecute more people if its crimes were not exposed.

“I know the persecution has been going on for many years,” she said. “The CCP also persecutes Tibetans, Uighurs, and Hong Kong people. It controls and persecutes its own people while bribing and deceiving people to infiltrate the international community.”

Mary left her phone number and social media contact information, and said, “I fully support you. What you're doing is very important. Truthfulness-Compassion-Forbearance is what we need. The CCP is evil. Let us stand together as one body. I wish to share and tell people about all your events.”

Young Passerby: The CCP Is against Humanity and Must Be Stopped 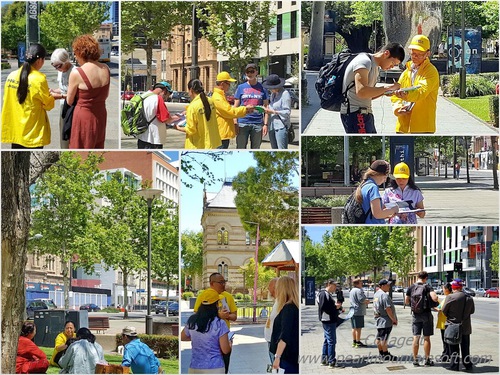 Conner, an undergraduate student, signed the petition. He said he knew about the persecution in China and the CCP’s state-sanctioned organ harvesting from living practitioners. He said that the CCP’s acts are against humanity and must be stopped.

When he learned that over 360 million Chinese people had quit their memberships in the CCP and its affiliated organizations, he was happy to sign the petition. 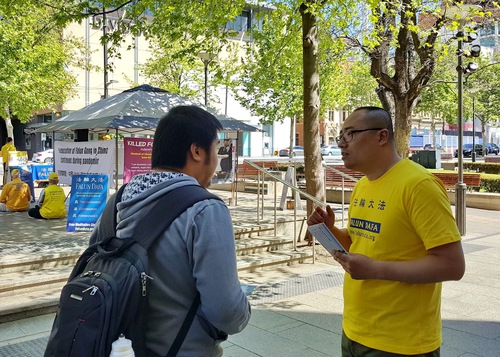 Carlos from the Philippines

Carlos, 22, from the Philippines, is learning Chinese. He said he knew about the CCP’s live organ harvesting.

“The CCP has done many bad deeds. It should collapse,” he said. He was worried that the CCP has infiltrated the Philippines in an attempt to control it. 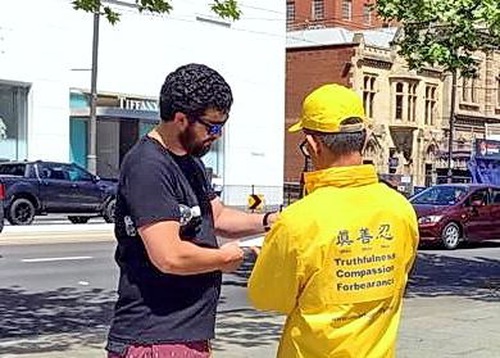 Jamie Hammilton signs the petition against the persecution

“This is horrible,” said Jamie Hammilton. He expressed his shock after hearing about the CCP’s live organ harvesting. He said he knew about some of the human rights infringements by the Party, especially the CCP’s instigation of the Hong Kong government to use violence against protesting youths in Hong Kong.

“Humans should have freedom of speech and expression,” he said, “I know it's extremely hard to do this in China. Criticizing the CCP is dangerous there. Look at what's happening in Hong Kong.” He hopes the signatures can help end the suffering.

Robert and Rosalie Pearson asked whether the practitioners collected signatures to support Hong Kong’s fight for freedom and democracy. A practitioner told them that eliminating the CCP was the only way to stop the suffering of all people.

They immediately signed the petition and said that most people don't know how evil the CCP is, and should know about practitioners' efforts to expose it. They said they hope the U.S. will do its part to accelerate the elimination of the Party for a better world.

After a family from China listened to a practitioner’s explanation the lady understood the significance of withdrawing from the Party and renounced her membership in the Communist Youth League.

“After Four Years in Prison, Anhui Woman Given Second Term for Her Faith”