(Minghui.org) The US Citizenship and Immigration Services (USCIS) updated its Policy Manual on October 2, 2020. It states that “any immigrant who is or has been a member of or affiliated with the Communist[s] or any other totalitarian party (or subdivision or affiliate), domestic or foreign, is inadmissible.” Quitting the Party then became one of the top searches on the Internet. The Service Center for Quitting the Chinese Communist Party (CCP) in Hong Kong (HK) immediately launched a hotline to help people quit the CCP and its youth organizations.

Human rights attorney Chen Guangcheng, who is exiled from China and currently resides in the US, predicted the coming of a new wave of Chinese people quitting the CCP organizations. He calls for those who are still members to quickly sever ties with the CCP, “or the only future awaits you is to go down with the CCP.” According to him, most people agree with the narrative that, "Heaven will eliminate the CCP” because of the numerous crimes it has committed against humanity. 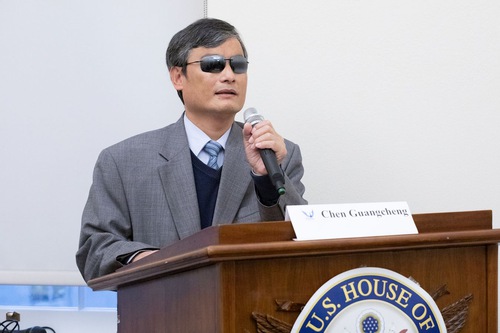 Lu Jie, head of the Service Center for Quitting the CCP in Hong Kong, said that over 360 million people have quit the CCP and its affiliates during the past 14 years, after the Epoch Times published the editorial series Nine Commentaries on the Communist Party. Volunteers at the Service Center in Hong Kong are mostly Falun Gong practitioners. Over the years they were stationed at different places to give out copies of the Nine Commentaries and help people quit. “The CCP is not China, and China’s National Security Act should not become the CCP Security Act,” Lu said. She also said they will continue to expose the CCP’s crimes and help people quit the Party. 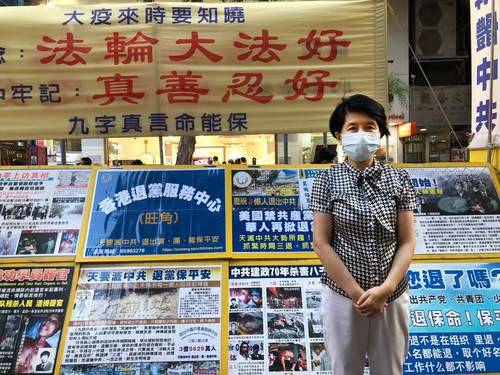 Lu Jie is the head of the Service Center for Quitting CCP in Hong Kong.

The new policy in the USCIS Policy Manual has “brought about a new wave of requests to quit the CCP,” Lu said. In the past two years, the political movements allowed many Hongkongers to see the evil nature of the CCP – this is expected to encourage people to quit. That is why she and other volunteers decided to man a hotline and email account to help those who are sincere. At the same time, there are a dozen Service Centers in HK. The volunteers also help people apply for the certificate for quitting the CCP.

According to a volunteer, Ms. Zhou, many people have called the hotline to inquire about quitting the CCP. One called from China and his entire family quit.

The US Spares No Effort to Combat the CCP

Attorney Chen described the CCP as “the enemy of humanity” in his speech at the RNC Convention in 2020. The speech was tweeted by President Trump. Chen talked about the President’s COVID-19 infection. “One may not truly understand the threat that the CCP posed and still poses to the free world and the damage it has done. After getting the CCP virus and recovering from it, the President should see that, as long as the CCP exists, nobody in the world, not only the Chinese, is safe.”

Chen expects the US to come up with more comprehensive measures to combat and distance itself from the CCP.

Talking about quitting the CCP, Chen said that members of the CCP never believed in communism or socialism, “They only joined the CCP to advance their career and out of self-interest.” Knowing that there is no interest to be gained, Chen was sure that people will leave the party to stay safe in the future. “Waves of people quitting the CCP terrify it.”

Chen was under house arrest in Shandong Province in 2005. “Sometimes I would wake up in the morning and see many fliers saying, ‘Heaven will eliminate the CCP’ and ‘Quit the CCP and its affiliates’ posted on the streets and bridges overnight. I could see that this terrified the CCP, because its censorship and threats did not work. The Chinese people disapprove of the CCP, including its persecution of Falun Gong.”

Chen said he saw a flier on a monument and some children walking were trying to remove it. Their parents stopped them. “I think the parents agreed with what was on the flier--‘Heaven will eliminate the CCP’--and didn’t want their children to sabotage it.”

HK hotline the quit the CCP：852-65963278HK email to quit the CCP：hktuidang@gmail.comWebsite of Global Service Center to Quit the CCP ：www.tuidang.org