(Minghui.org) Falun Gong practitioners in Sweden have introduced Falun Gong and exposed the Chinese Communist Party’s (CCP) persecution every Tuesday, Friday, and Saturday, rain or shine, near Parliament House in Stockholm since the summer of 2020. Many local people have expressed their support and admiration for practitioners’ peaceful and persistent efforts to end the persecution.

Despite the cold and rain on Saturday, September 19, practitioners set up their booth and banners. They demonstrated the Falun Gong exercises in the rain and distributed flyers to people passing by.

Many stopped to learn more about Falun Gong and expressed amazement at practitioners’ determination. They listened as practitioners told about the persecution in China that has last for 21 years and signed the petition calling for an end to the CCP’s atrocities. 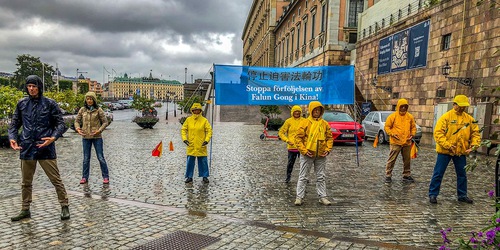 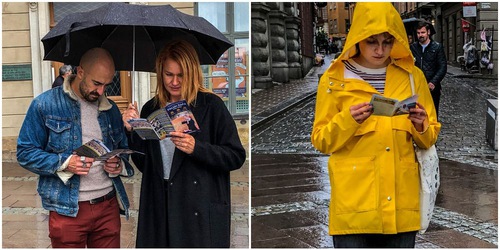 People sign the petition after learning about the persecution. 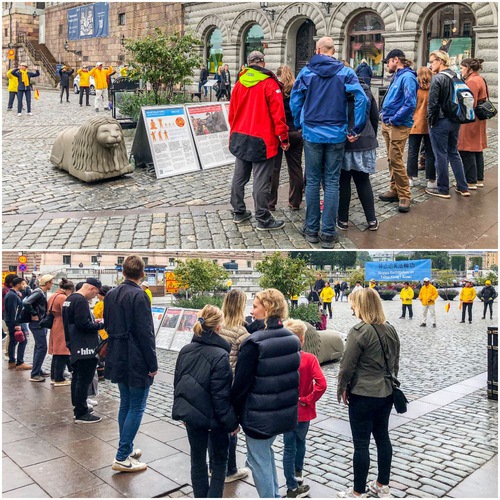 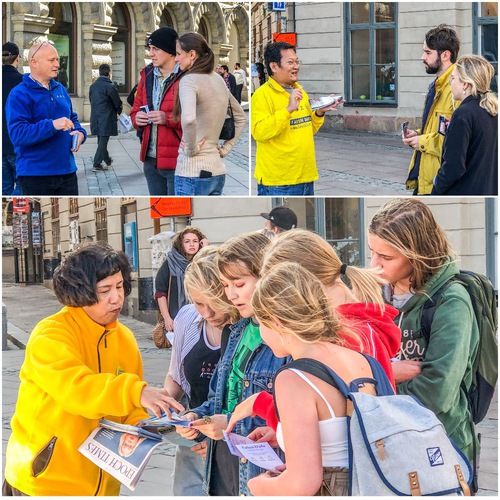 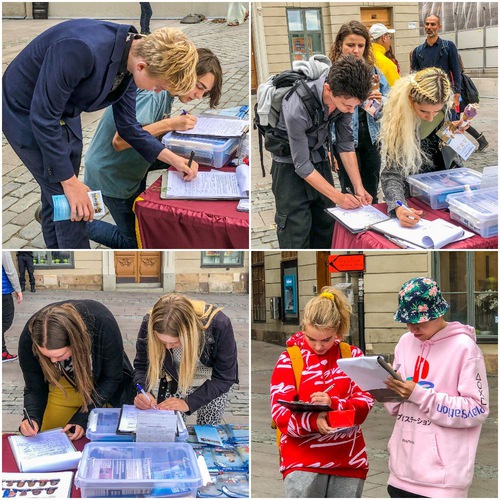 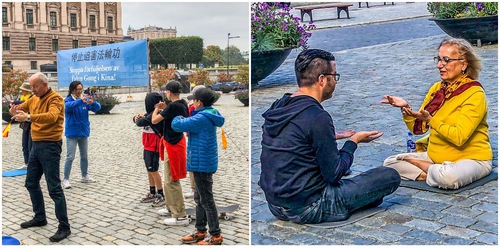 One man was holding a Falun Gong flyer and an umbrella as he bent down to read the information on the display boards. He studied them for a long time, then went straight over to the booth. He asked a practitioner to help him take off the cover so he could sign the petition, which he did with shaking hands. “Sorry,” he said. “I stood for too long and now my clothes are wet. It’s cold. But the CCP is so terrible! I can’t stop shaking. It’s unbelievable that such crimes are still happening. I hope my signature will help.”

A couple from Spain talked with a practitioner for a long time. They couldn’t understand why the Chinese regime would treat kind people so cruelly. The practitioner answered their questions and explained that the CCP feared Falun Gong’s popularity and the communist ideology conflicts with Falun Gong's principles of Truthfulness, Compassion, and Forbearance. The practitioner also talked to them about the CCP’s lies about Falun Gong and the evidence of forced organ harvesting from living practitioners.

They were touched by practitioners’ courage in the face of such violence. Even though the man’s hair and clothes were wet from standing in the rain, he said he was glad he learned the information and asked, “Could you take off the cover? We would like to sign and voice our support!”

It was the first time Rolf, a local resident, had run into Falun Gong practitioners. He watched the exercise demonstration, read the display boards, and then signed the petition. He told a practitioner that his wife had recently passed away, and he was too sad to see anyone, but he felt relaxed and comfortable at the Falun Gong booth. He said, “I’ll be so glad if my signature can help you. Thank you for coming and telling me all this.” Rolf hoped more people would support Falun Gong. Pointing at Parliament House, he said, “Everyone in that building should come out to support justice. The more, the better.”

A young man named Andreas was fascinated by the Falun emblem. He said, “I have seen it in Brazil. It’s a Buddha symbol.” He told a practitioner that he had been interested in energy exercises. When he heard about the persecution and organ-harvesting crimes, he exclaimed wide-eyed, “It’s so serious and so evil! What’s wrong with our society? You have to come out more and tell people to help stop it.” 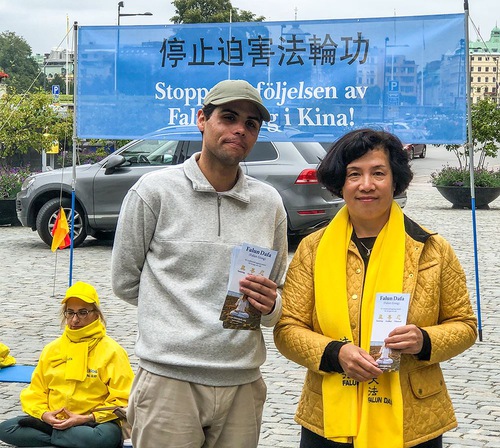 He was touched by practitioners’ persistent efforts to end the persecution over the past 21 years and signed the petition. He took flyers and signature forms and said, “I’ll help you get more signatures. I would like to try the Falun Gong exercises.”

Marie, a senior lawyer, sympathized with Falun Gong practitioners and supported their work. She said, “We can't tolerate the crimes of the CCP and its criminal gangs. What you are doing is right. You are fighting for justice. You will succeed!” She gave practitioners a thumbs-up and said, “Justice will win. Keep up your great work.”

“A Practitioner's Triumph Over Adversity: “I Have No Regrets!””