A Doctor’s Faith in Falun Dafa

(Minghui.org) With silver hair and a warm smile, Dr. Hu Naiwen treats patients like they are his relatives. The renowned Taiwanese doctor helps patients improve their health by looking for the fundamental reasons behind their illnesses. 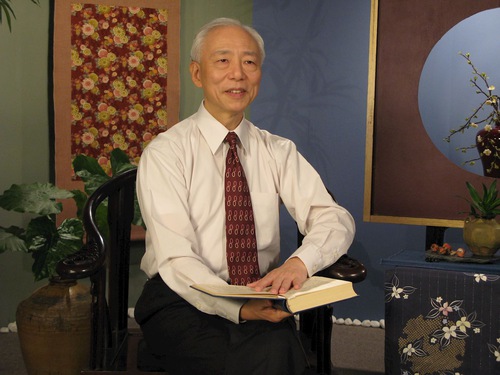 Dr. Hu regards treating patients as a process of improving his character and understanding the relationship between health and morality.

Dr. Hu majored in biology in college and studied neurology and endocrinology in graduate school. After graduation, he worked in pharmacology. His workplace sent him to study life sciences at SRI International, a non-profit research institute in the United States founded by Stanford University. As he explored the most up-to-date research in the institute's library, he became interested in the connection between acupuncture and the nervous system.

After he returned to Taiwan, amazed by the profound wisdom of Chinese culture with its 5,000 years of history, he dove into a completely new field of acupuncture and Chinese medicine. By the time he received his license to practice Chinese medicine, he was already in his 40s.

“I had poor health since my childhood. Even when I was a young man, I had an unhealthy complexion and lacked energy. I was often troubled by stomach problems due to anxiety. Western medicine led me to supplements, which didn’t help much. After learning Chinese medicine, I tried to recuperate with Chinese medicine. My health seemed to have reached a delicate balance, but I knew clearly that I was still in a poor condition overall,” Dr. Hu said.

Hoping to improve his health, he turned to various qigong exercises. “I searched all over the place and finally heard the words ‘Falun Gong’ in a qigong class one day when I was almost 50. Very few people knew about Falun Gong at the time. I continued to ask around and eventually met an elderly man who had learned Falun Gong.”

“I attended Master’s lecture at Taipei Municipal Sanxing Elementary School and saw Master’s calm, benevolent demeanor in the bustling, noisy environment. Master repeatedly urged us to follow Truthfulness-Compassion-Forbearance in our work and lives, starting with becoming a good person and living by high-level principles in order to cultivate to completion,” Dr. Hu recalled.

As Dr. Hu applied Truthfulness-Compassion-Forbearance in his life, his health issues, including his chronic stomach problems, gradually disappeared. He became increasingly energetic and found that his wisdom grew. He gained a deeper understanding of classical medical books that were written in obscure ancient language.

“It’s wasn’t until after I learned Falun Dafa that I realized that the wisdom of ancient Chinese civilization, acupuncture, Chinese medicine, etc., were actually more advanced than the most advanced Western medical science, and Falun Dafa by far surpasses all of these. It’s not a qigong or a religion. It’s cultivation practice, a profound field with a long history in human civilization.”

It dawned on Dr. Hu that Falun Dafa clearly reveals the principles presiding over the universe and all lives. Through continuous cultivation, he observed the direct connection between cultivating one’s character and improving one’s health.

Dr. Hu had an interesting experience with an elderly patient after he started cultivating Falun Dafa.

“She told me that she was a Christian and prayed every day. I asked her what she said in her prayers. She said she confessed to God about lossing her temper on this day and bickering with another person on another day,” he recalled.

Her words reminded Dr. Hu of what Master Li had said,

“Some people have said, ‘This endurance thing is hard to do. I’ve got a bad temper.’ If you have a bad temper then just change it. Practitioners have to endure.” (The Ninth Talk, Zhuan Falun) (Translation Edition (Feb. 2003, North America))

Dr. Hu realized that unlocking her heart would be the key to improving her health. “I told the woman, ‘Our so-called ‘confession’ takes two steps: admitting the wrong and regretting it. It wouldn’t work if you only admit it but don’t regret it and don’t correct yourself.’ The woman took my words to heart and was brought to tears. She came back with a thank-you gift the next time and told me that she had gotten rid of her bad habit of losing her temper. And her disease was completely gone! This true story proved to me that so-called diseases are nothing when we apply the principles of Falun Dafa,” he said.

Diseases originate from the heart and change as our mindset changes, he said. The key to breaking out of suffering is uplifting our realm of thought and eliminating our attachments.

“According to the theories of Chinese medicine, some diseases, including cancer, could be the result of emotional overload, such as excessive joy, anger, worry, sadness, panic and fear,” Dr. Hu said. “The ups and downs of these emotions are due to people’s attachments to fame and fortune, and they manifest in our bodies as diseases. When my patients tell me their symptoms, I tell them these symptoms are caused by an unhealthy lifestyle at a low level. If they could think at a higher level and let go of their attachments, their ‘diseases’ would be gone.”

“One day, I woke up and found I couldn’t move one of my hands and one of my feet. They were numb and weak. It was certainly a bad situation according to my medical knowledge. I was indeed worried at first, but I did my best to eliminate this feeling and cried, ‘Master, please save me!’ After repeating this for a while, my symptoms were gone.”

When these symptoms recurred later on, Dr. Hu recalled what Master Li had said:

“Debts have to be settled. So on your cultivation path some dangerous things might happen. But when these things happen you won’t be scared, and we won’t let you get into real danger.” (The Third Talk, Zhuan Falun) (Translation Edition (Feb. 2003, North America))

He told himself that he was fine and safely passed these tests.

Believing in Dafa and Looking Within

Dr. Hu was enlightened that serious barriers on the path of cultivation were to test practitioners’ righteous faith, and practitioners must keep Master and Dafa in mind no matter how bad the situation becomes. He said that the first moment when facing a test reflects clearly one’s xinxing (mind nature or character), righteous thoughts, and level of faith.

“A young man used to come see me every week. He always felt so cold that he had even sealed his windows. I told him that medicine wouldn’t help and he’d better try practicing Falun Dafa. He followed my advice. On the second day of the nine-day workshop, he started sweating, and his health issue was gone. He never had to come back to see me again.

“A lupus patient of mine used to fly in from Tainan to see me every week. One day, I asked him if he would like to stay in Taipei for nine days to attend a Falun Gong workshop. He said yes. After the workshop, he became healthy and never needed to see me again. Some patients weren’t willing to try because they couldn’t let go of their notions or their religions, and they continued to battle their diseases for as long as 20 years.”

“If a third person witnesses the conflict between the two, I would say that it’s not accidental for that third person to see it, and he too should think it over: ‘Why did I see their conflict? Is it because I still have some shortcomings?’” (Teaching the Fa at the Western U.S. Fa Conference)

Dr. Hu asked himself, “Why does this patient have this disease? What attachments does he or she have? Do I have the same attachments?” After seeing a hundred patients, Dr. Hu would have asked himself these questions a hundred times. He regards the process of treating patients as a process of cultivating himself.

Dr. Hu is now in his seventies. He has made many medical education videos, written books, and given lectures over the years. “I’m not doing any of these for money or reputation,” he said. “Everything I have done is for people to find their connection with Falun Dafa and learn that Falun Dafa is great.”