(Minghui.org) Busan, South Korea's second most-populous city, has hosted The Art of Zhen Shan Ren International Exhibition 12 times over the last three years. The exhibition has been held at the Busan government center, Busan Citizens Park, Busan Citizens Hall, and many other venues between 2017 and 2019. “Zhen Shan Ren,” which is Chinese for “Truthfulness-Compassion-Forbearance,” comprise the principles of Falun Dafa (also known as Falun Gong) cultivation practice. The Art of Zhen Shan Ren International Exhibition, consisting of artworks by Falun Dafa practitioners, showcases the beliefs and experience of this traditional mind-body spiritual discipline. The exhibition also spotlights the tragedy of the 20-year persecution of Falun Dafa in China, a brutal suppression that has been ongoing since 1999.

Through local newspaper reports, advertisements in the news media, and subway advertisements, many individuals, families, and members of various organizations have learned about and attended the exhibitions. Because most of the exhibition halls in Busan are located in popular parks, quite a few people who were simply out for fitness have also stopped by to view the artworks.

Despite attempted interference by the Chinese Consulate, all 12 exhibitions have been very successful. Attendees have included members of the National Assembly, city councilors, district councilors, government employees, organization leaders, artists, and many others, from all circles of society.

“Bringing Happiness to Everyone” 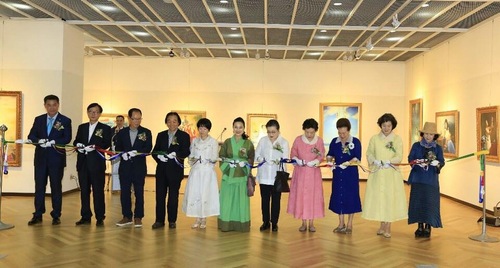 The opening ceremony of The Art of Zhen Shan Ren Exhibition at the Busan government center.

A recent exhibition, held at the Busan city government center in September 2019, attracted people from all walks of life. Song Yung-myng, former president of an art and cultural association in Busan, was impressed by the artistic level of the exhibition. He remarked that the realistic artworks carry a universal message that goes beyond the boundaries of language, bringing happiness to everyone.

A Falun Dafa practitioner who acted as a guide at the exhibition told visitors that due to pressure from the Chinese Consulate, several artworks illustrating the persecution against practitioners in China were not on display. Upon hearing this, many attendees were deeply disturbed by the Chinese Communist Party's (CCP) infiltration in Korea, and said they hoped that the human rights violations will end soon. 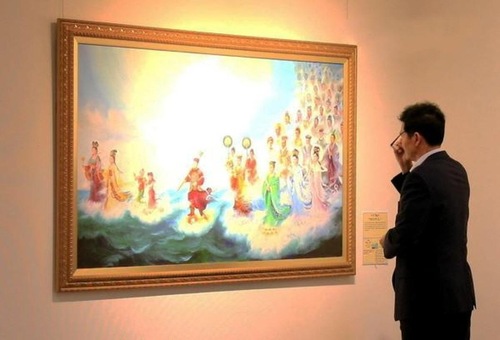 An attendee views the artworks.

During the following exhibition at Citizens Hall, Mr. Ahn from the hosting organization said that he really appreciated the peace and harmony reflected in the artworks, along with the talent of the artists. “It is hard to imagine that such brutality still continues in China. We cannot allow tragedies like this to happen again,” he affirmed. 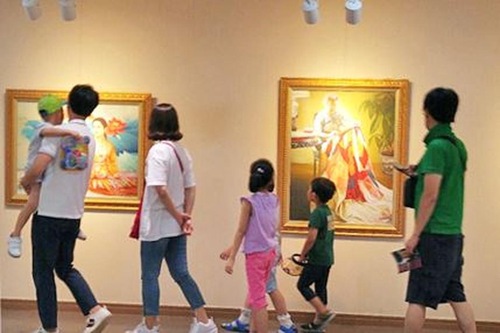 Parents bring their children to see the exhibition.

A mother took her two young children, a boy and a girl, to see the exhibition and explained the paintings to them one by one. Standing in front of “Mending the Cosmos,” she asked the children how many dragons they could see in the painting. She also pointed out the different skin colors of the people in the painting, and told them that the painting showed that people from all ethnic and cultural backgrounds can practice Falun Dafa.

As they viewed the painting of “Tears of Grief and Joy,” the mother reminded the children of the moral values demonstrated in the painting. “Only good people can go to heaven and those who do bad deeds will end up in hell,” the mother said. “This is very important, and you two need to remember this.” 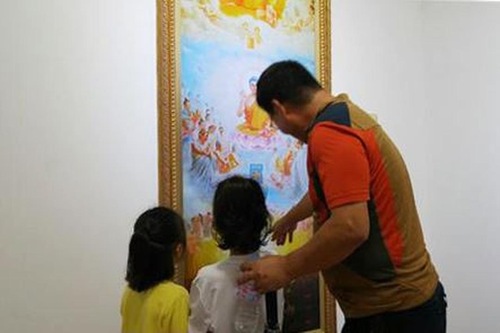 A father explains a painting to his children.

Another family of three who came to the exhibition told the exhibition guides that they appreciated the artwork very much. “I lived in China for one year and these paintings remind me of what I saw over there,” the woman explained. “It’s a noble act for these practitioners to safeguard their belief while risking their lives. We cannot let something like this [persecution] continue.”

Many students attended the art exhibition in groups organized by their schools, including more than 1,000 children from a kindergarten. As the teachers explained the paintings, the children looked at the artworks attentively and saw that innocent people are being suppressed in China. The teachers also told the children that it is important that they become good citizens that benefit society. 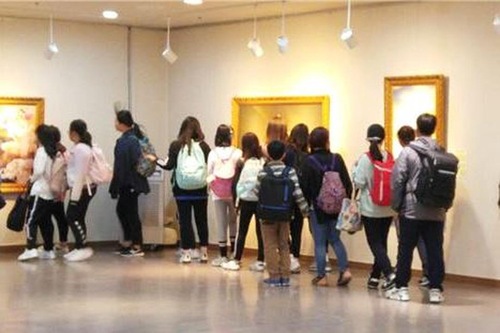 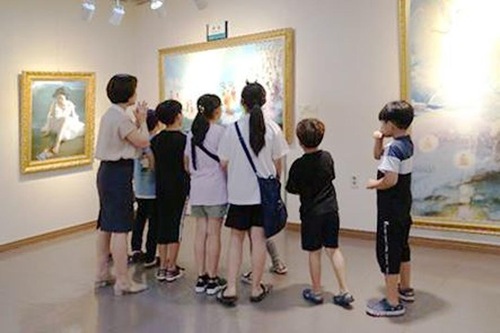 Groups of elementary school students at the exhibition.

A middle school teacher who practices Falun Dafa decided that since the art exhibition promotes fine arts and traditional values, her students' assignment during their break was to write an essay about their impressions after attending the exhibition.

A grandmother who accompanied her grandson to the exhibition said the paintings reminded her of “625,” also known as the Korean War, which broke out on June 25, 1950, and the brutality of the North Korean Communist Party. She thanked her grandson's teacher for giving this assignment to the students and said, “All young people should come here and learn from these artworks.” 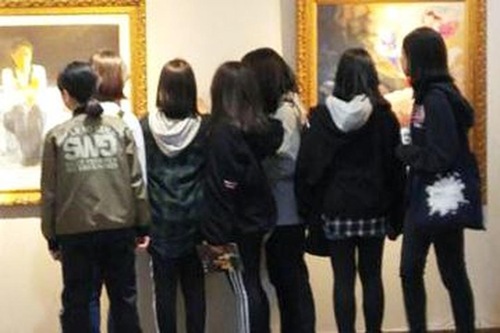 A group of middle school students are touched by the paintings.

A high school student wrote in the visitors' book: “Seeing how practitioners in China are suffering for their belief, I am wondering if there is anything I can do to help other people.”

Lee Jeong Heon, a painter, was shocked by the mistreatment that Falun Dafa practitioners have experienced in China. “I did not know much about this before. Thank you for such an informative event, and I hope that practitioners can freely practice their belief soon,” he said. In his blog, Mr. Lee also shared detailed information about the art exhibition and the suppression in China.

Lee Chang-ho, who runs a foreign language tutoring facility, said he knows about the bloody history of the CCP, including its harsh suppression of Falun Dafa practitioners. “But I was not aware of anyone who has presented this topic in the form of fine art,” he added. “We need to have more great events like this so that more people can learn about how the CCP persecutes human rights in China.” Mr. Lee said he would recommend the exhibition to the more than 350 students at his tutoring facility.

During the exhibition at the Eulsukdo Cultural Center, Mr. Park from the Ministry of Patriots and Veterans was deeply impressed by the artworks. He and dozens of his coworkers were curious about learning Falun Dafa. He left his contact information and invited practitioners to come to their office to teach them the Falun Dafa exercises. “Can one achieve the calmness and peace like that shown in the artwork?” he asked.

Suh Young-Sook, who sings in a choir, attended the exhibition and told practitioners that she wanted to learn the exercises. After a practitioner demonstrated the first exercise for her, Ms. Suh praised the movements for their grace and asked how much it would cost to teach the choir members regularly. When she heard that practitioners help people learn Falun Gong on a voluntary basis, free of charge, she was very excited. She and other choir members are now learning the exercises together once a week. 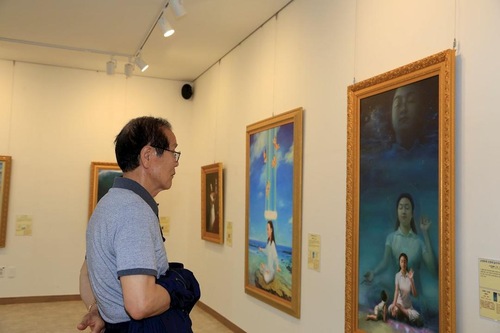 Mr. Kang, 77, enjoyed the artworks and is interested in learning the exercises. 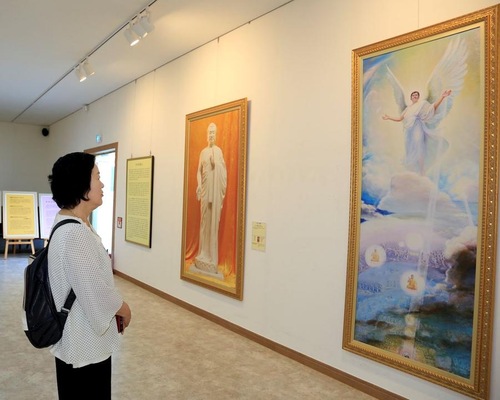 A woman views a painting.

The Art Market at Busan Citizens Park is the only art gallery in the city that is open at night. While enjoying the fountains, local residents also enjoy the relaxed environment and various cultural opportunities. Many local people came to the Art of Zhen Shan Ren International Exhibition when it was held at this venue.

“The truth will for sure prevail,” wrote Mr. Park from a Buddhist cultural association. “I hope your success will bring light to this world.”

Several attendees wrote in the guest book that they learned about the nature of the CCP from the exhibition. Some people also asked about information for local group practice sites and said they planned to join one.

“People in China Express Gratitude to Master and Wish Him a Happy New Year!”