(Minghui.org) Waterboarding is a common method used by Chinese officials to torture Falun Gong practitioners, in an effort to have them give up their belief. According to a Minghui 20th Anniversary Report, this method was applied at Masanjia Labor Camp in conjunction with other torture methods.

Below is recollection of an artist who was imprisoned for 15 years for making banners with the words “Falun Dafa is good.”

Based on torturing methods recommended by Masanjia, officials abused him with waterboarding for more than 10 hours at Mudanjiang Prison.

Falun Gong, also known as Falun Dafa, is a meditation system based on the principles of Truthfulness-Compassion-Forbearance. The Chinese Communist Party (CCP) began to suppress Falun Gong in July 1999. Since then many practitioners have been arrested, detained, imprisoned, tortured, and murdered. Even worse, organs were and still are harvested for economic profit by the CCP.

My name is Yu Zonghai and I am an artist. Because of making banners with the words “Falun Dafa is good,” I was arrested in September 2001, and incarcerated in Mudanjiang Prison in Heilongjiang Province between July 2002 and October 2016. During those years, I suffered physical abuse, intending me to renounce my belief. Among the abuses, the worst torture occurred between October and November 2010.

At the time, Fu Runde (付润德) had just been appointed deputy director of the prison, responsible for brainwashing. By then, it was the second year after Li Dongsheng had become the head of the 610 Office, and a three-year intensive campaign had been launched.

Fu gave an order to “transform” 100% of the Falun Gong practitioners (“transforming” means forcing practitioners to renounce their belief) through severe torture carried out by guards and inmates. During those days determined practitioners, including myself, were tortured in the extreme.

Fu devised a detailed plan. First, for several months he prohibited family visits for all detainees. Secondly, he ordered each division to send officers to learn the persecution tactics employed at Masanjia Labor Camp. Thirdly, he issued a policy in the name of the prison CCP Committee, which required that 100% of Falun Gong practitioners to be “transformed.” Otherwise, officers in that division would be fired from their jobs. This forced officers to torture practitioners out of self-interest.

I was taken to Division 6, which held two other practitioners who refused to yield. Deputy manager Bi Haibo (毕海波) went for one month to Masanjia. After returning to the prison, he implemented new strategies.

This started with forming a team of thugs headed by Zhao Jianhui and Li Xiaobin, two of the most vicious inmates. Next, from the inmates who had requested reduced detention terms, or who planned to do so, he selected several who were especially vicious. Missing the deadline of term reduction meant an inmate may have to stay one or several years longer. In fact, the intensive labor, plus the poor diet had led to the death of some inmates. Therefore, these inmates would adhere to Bi's orders unconditionally to reduce their detention terms. In addition, Bi intentionally picked some inmates from other subdivisions who did not know the practitioners, so that they would beat us without feeling remorse.

These inmates deprived me of sleep. By then, I heard they had mistreated another practitioner already. I went to Bi, explaining to him that Falun Gong practitioners were innocent, in the hopes that he would not violate the law. But Bi did not listen.

This torture was implemented several days later. On that day, Bi ordered over 10 thugs, and I, to return to the cell from the working unit. Two guards checked around the detention area after lunch. They then locked the metal door and left.

These thugs took me to an empty room. Surrounding me in the middle, they pushed me to the floor and removed all my clothes. They forced open my mouth with a metal bar and several teeth were loosened. One tooth fell off at that moment and another tooth fell off the next day. They stuffed my socks in my mouth and wrapped tape around my mouth many times. They then twisted my arms to the back, and tied my arms and wrists. They also put my feet together, tying my feet and legs tightly together. After all this was done, they threw me on the cold tile floor in the bathroom.

There were already many plastic buckets in the room and they were piled around me. The thugs kept me away from the faucet and windows to prevent me from committing suicide. It was November and the temperature had dropped to lower than -10 C (about 14 F), but the thugs nonetheless opened all the doors and windows to make it colder (the wind at night was extremely cold). They then came at me – some sprayed water at me with plastic pipes, and others poured freezing cold water on me with buckets. 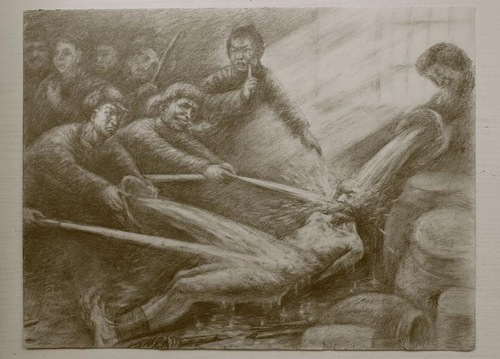 Re-enactment: Sketch from the author, artist Yu Zhonghai, that depicts the waterboarding he suffered at Mudanjiang Prison in November 2010.

This lasted several hours and I lost consciousness because of being suffocated and the cold. After I regained consciousness, one inmate in charge asked if I would sign documents renouncing my belief. I refused.

A group of thugs viciously beat me. Immediately my head was injured. They then pushed me to the ground and beat me with a mop handle, which was broken in half during the beating. The inmate in charge then asked an inmate to continue torturing me. This was a homicide criminal who was sentenced to lifetime detention, and his term had not changed for 10 years. He squeezed the water pipe and aimed the rushing water at my ear hole, and my nostril also, for a long time. Since my mouth was sealed with tape, I could breathe only through the nose. This almost suffocated me.

The waterboarding lasted for over 10 hours.

This torture was responsible for my broken ribs. Zhao thrust his knees at my back. One could see that my left rib was caved in. My legs were swollen and very painful. It took more than two months to recover from the injuries.

Given the lumps on my head, it was deformed. Both eyes were swollen, and the eyeballs were red. I also had bruises all over my face, which did not fade until two months later. I also had wounds all over my body and my fingers were swollen because of bending. The inmates involved were Zhao Jianhui, Tie Feng, Li Xiaobin, Wang Baohai and others.

Upon seeing the serious injuries, some guards were surprised by the brutality. As I showed my tooth to Guo Hushan, one of the guards said, “Keep the evidence and you can sue them at a later time.”

As a result of the mistreatment, I had difficulty breathing and experienced dizziness. I had blurry vision and poor hearing, and every sound seemed to come from far away. My movement was slow, and I could not turn to the side during sleep for two months. I asked Bi for a medical examination, but he refused.

Dozens of steadfast practitioners incarcerated at Mudanjiang Prison were also tortured as described above. Many inmates were shocked by the cruelty. Because many practitioners were prohibited from family visits for a long time, very few people learned about the cruelties perpetrated in that prison.

Bi continued to mistreat me after this. This included beatings, sleep deprivation, and being forced to stand motionlessly for a long time. One time a guard shocked me with electric batons, causing many blisters.

Aside from Mr. Yu Zonghai, his wife Ms. Wang Meihong, a senior engineer of geological exploration, was also detained numerous times. Because of distributing Falun Gong materials, she was sentenced to an 11 year prison term in 2003.

Additionally, Mr. Yu’s sister, Ms. Yu Zhenjie, was injected with unknown drugs during detention, and her lower body was paralyzed from being shocked with electric batons.