(Minghui.org) Young Falun Dafa practitioners from more than 20 colleges and universities in Taiwan attended the annual Falun Dafa Youth Summer Camp at TransWorld University in Douliu City from August 16 to 18, 2019.

The purpose of the event was to let young practitioners understand the meaning of cultivation practice through Fa-study and experience sharing, and provide an environment for them to learn from each other and bring a truthful, kind attitude to their daily lives. The organizers also hoped the camp would encourage younger practitioners to positively impact their campuses. 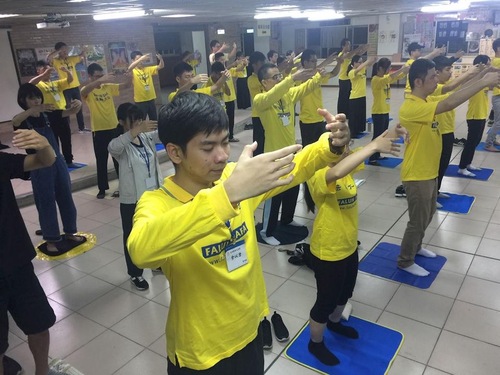 Many attendees commented that they experienced a strong and positive energy during the camp. Another of their common experiences was many of them felt they could now easily find a solution or a way out from adversity after they based their thinking on the principles of Truthfulness-Compassion-Forbearance.

Wang Qiong-yi, a senior of China Medical University in Taipei, started practicing Falun Dafa when she was a young child with her mother. She then drifted away from Falun Dafa for many years and had met with many difficulties, conflicts, and frustrations.

One day, she recalled her wish to cultivate. She read Zhuan Falun again and returned to Falun Dafa. Her heart has since returned to a peaceful state and she once again experiences the beauty and supernormal power of Falun Dafa.

“My mother told me about this camp and I decided to attend. I used to think that Dafa projects were carried out by older practitioners,” Wang said, “but I found out that there are many talented young practitioners in every college and university. It shattered my old notions and helped me realize the importance of improving my xinxing.

“Young practitioners should cultivate well and have a more powerful impact in this era,” she said.

Hsu, a graduate of Tsinghwa University who currently works at an industrial research institute, said that a strong and warm energy surrounded him when he was sending forth righteous thoughts at the camp.

“I have done so many wrong things,” he said. “I am so grateful that Master has not given up on me. Master still strengthens me and encourages me.”

Hsu practiced Falun Dafa with his mother when he was very young. When he was a sophomore in high school, he began to practice of his own conviction, until he entered college. He then slacked off and even drifted away from Dafa for five years and did things that practitioners of cultivation should not do.

Master didn't give up on him and guided him back to the summer camp.

“Many thanks to Master for protecting me for all these years,” he said.

Lin, a student of National Defense University, was attending the camp for the second time. The first time, he thought it was a process of recharging energy and cleansing human notions. After the camp was finished, he returned to pretty much the life of an ordinary person and behaved not quite like a practitioner.

“My knowing side knows that it is not working and I have to find the motivation and diligence like I had in the beginning of cultivation practice. So my purpose of attending the camp this time is to return to this pure and diligent status,” Lin said.

While living life like an ordinary person, he did things that fall short of the standard of a Falun Dafa practitioner. He couldn't forgive himself and fell into a negative self-criticizing loop.

Sharing and encouragement from fellow young practitioners helped him to pull himself out of his negative downward loop. He now understands that all of that was arranged by the old forces to destroy a practitioner. 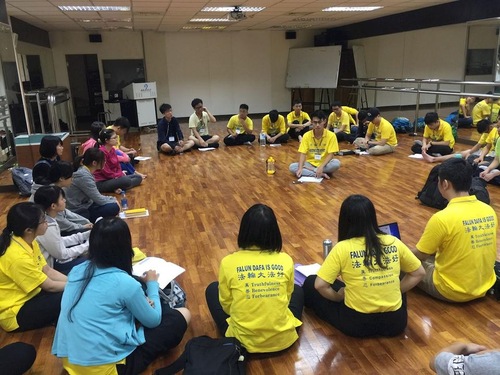 Lin had once led a psychological group sharing therapy. He found it only had limited effectiveness. The Falun Dafa experience sharing session in contrast was full of positive energy and was far more effective.

Lin commented that a practitioner would share a difficulty he or she had encountered in his or her life, look for the meaning of this adversity, and search inward to find the root cause of it.

Other practitioners would then share their own understandings. Hearing these responses helped the practitioner gain more insight into the situation, and better position him or herself and the surrounding society, and also gain a clearer mind. This helped every attendee build courage to face new challenges. He said the power of a short experience sharing is more powerful than regular psychological therapy.

Yang, was born in China and her family migrated to Japan when she was 13. Two years ago, she graduated from a university in Japan. A few months ago, she obtained a working visa to teach Japanese in Taiwan.

She said it was a valuable opportunity to participate in the summer camp, and she often experienced a positive energy field while with the other young practitioners. She emphasized that the freedom in Taiwan is valuable and wished the practitioners born and raised in Taiwan would cherish their environment and study the Fa more so they could be more persistent in doing the three things well.

Yu, a second year graduate student of National Chengchi University, had feared that he might doze off during Fa-study at the camp. He actually found out he could study the Fa for hours without feeling drowsy. He felt energetic during the day at the camp even after only sleeping only 4 or 5 hours at night. The positive experience enabled him to break through human notions and fear.

At first, a student named Wu didn't want to attend the camp. Being a freshman at a military school, he had planned a summer vacation that involved staying comfortably at home and having a lot of sleep. But his mother registered him for the camp, so he reluctantly showed up thinking it would be three days of hardship.

He had no time to practice Falun Dafa while in military school, and the camp gave him a chance to catch up.

“While practicing exercise two, holding the wheel, my nose began to bleed. I used to have nosebleeds often. I immediately reminded myself that this is Master helping me to clear karma and I am fine.” He also continued to remind himself, “I must be steadfast in Dafa. I won't be interfered. I will complete my exercises with the group.” As soon as he strengthened his thoughts, the nosebleed stopped.

“I immediately felt like an electric current was passing through my arms and hands. My whole body was engulfed in a warm energy. It was very comfortable and amazing,” Wu said.

Another student named Wu is a sophomore in high school. The camp gave him time to calm down and study the Fa with good concentration.

Wu shared, “I was wronged at school and felt very upset. I felt it was unfair because other students got a pass, but I was punished. My father didn't believe my explanation and added salt to the wound.

“I couldn't totally put all of these things down at the beginning, but during the camp I began to look inward at myself. I found many attachments, like jealousy, feeling I had been unfairly treated, and I became determined to let them go. Gradually I put them all down.”

When the camp was completed, Wu concluded: “No matter whether people believe you or not, if your actions are righteous, you won't be bothered by what others think. If I am wrong, I correct myself. If I am not wrong, I take it as a reminder to do better next time. If I can follow the principles of Truthfulness-Compassion-Forbearance, I will have no guilt. This is cultivation practice.”

Though the camp was only three days and two nights, nearly every attendee experienced Master's strengthening and the power of Dafa and felt they obtained a lot. 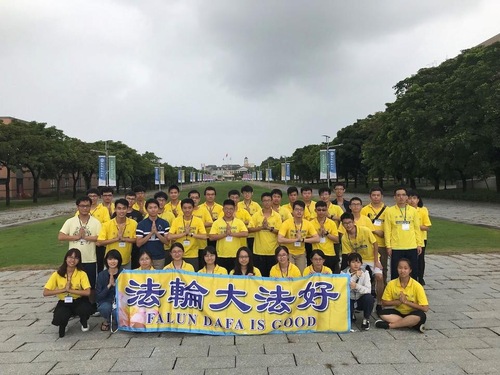