London: Falun Gong Activities Raise Awareness and Call for an End to the 20 Years of Persecution in China

(Minghui.org) Falun Gong practitioners across the world hold events every year around July 20th to commemorate the lives of those who have died as a result of the persecution in China. This year is particularly significant, as 2019 marks 20 years of the Chinese Communist Party's (CCP) persecution of Falun Gong. Ordered by Jiang Zemin, the former head of the communist regime, the CCP launched the persecution of the practice on July 20, 1999.

Practitioners in the United Kingdom participated in a series of events in London on July 20, 2019, to inform people of the 20-year-long persecution in China. Several practitioners who survived the persecution talked about their experiences and called on the public to help stop the ongoing tragedies.

The activities started at 9:00 am in front of the Chinese Embassy with a press conference and group exercises, followed by a grand parade through central London. Another rally was held afterward at Saint Martin's Place. Practitioners also visited the British government at 10 Downing Street to submit an appeal letter and petition forms that had been signed by the public. The events concluded in the evening with a candlelight vigil in front of the Chinese Embassy.

The series of activities gave Londoners and tourists a chance to see Falun Gong practitioners in person and learn more about the persecution. People responded by signing petitions and encouraging their friends and family to join the force to oppose the persecution.

Some people also expressed interest in learning Falun Gong, including many Chinese. 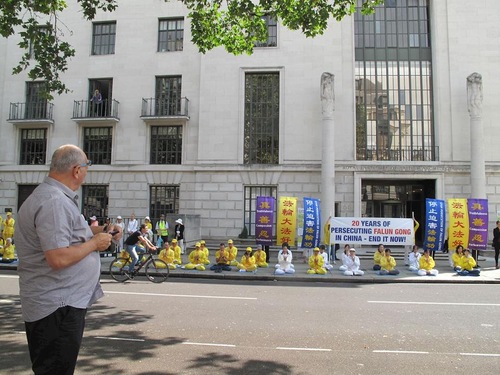 A passerby watches Falun Gong's sitting protest in front of the Chinese Embassy in London on July 20, 2019. 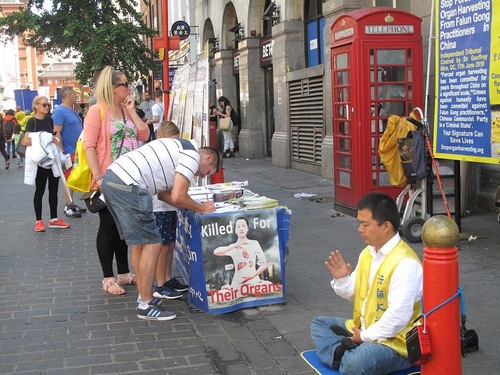 London Chinatown: An English couple heard of Falun Gong for the first time after seeing the parade and came to Chinatown to sign the petition opposing the persecution in China. 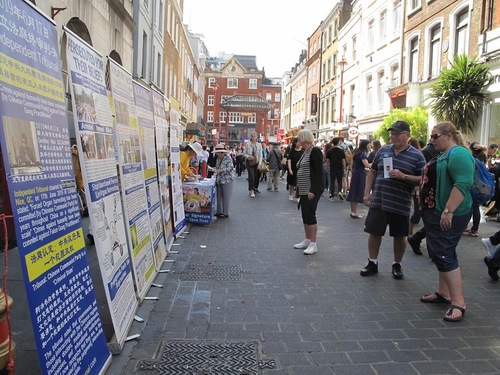 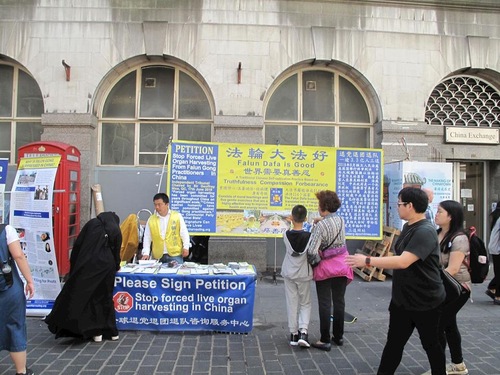 Passersby, including many Chinese, read the display boards in Chinatown 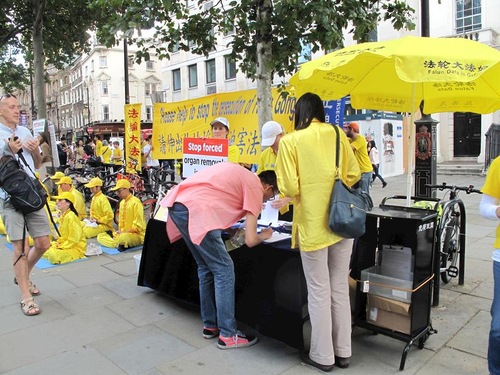 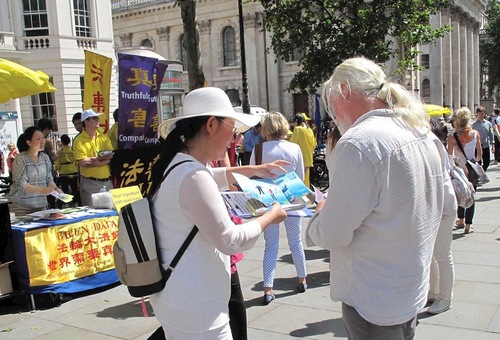 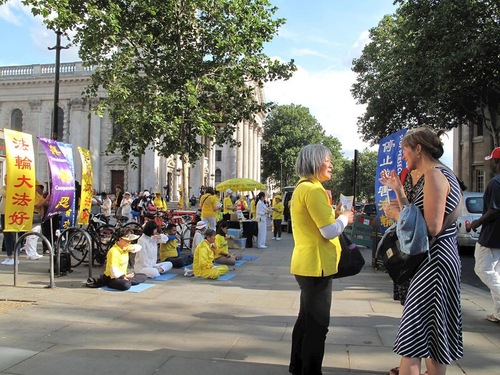 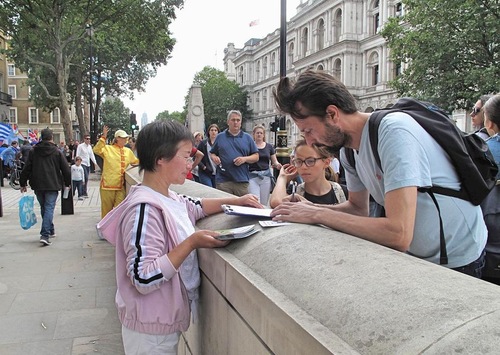 Mashel (right), from Sweden, signs a petition during the Falun Gong activity near the Prime Minister's office at 10 Downing Street. 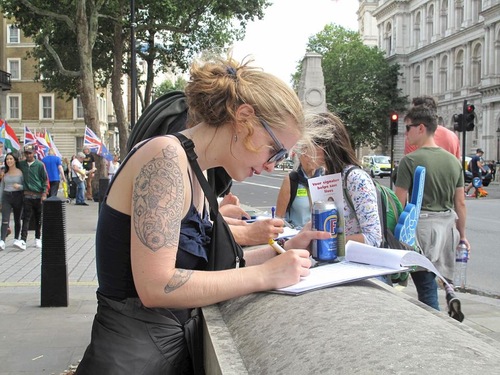 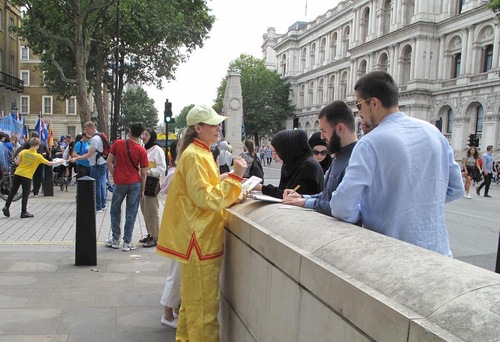 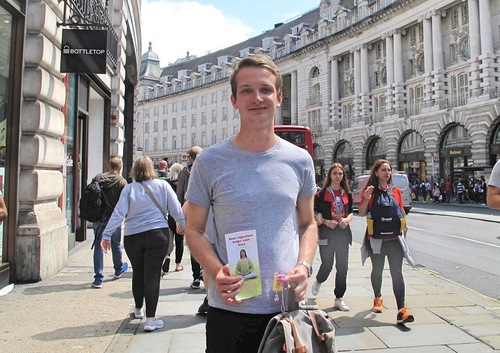 Jeff, a local Londoner working in Westminster, wishes the persecution of Falun Gong would stop immediately.

Jeff, a Londoner working in Westminster, encountered Falun Gong for the first time a few years ago in New York City. Citing the recent events in Hong Kong, Jeff said he recognized the brutal nature of the communist regime.

“A persecution of people who do a peaceful meditation is too bad and must stop immediately... I will tell more people. It's better to let more people know [the facts of the persecution],” he commented. 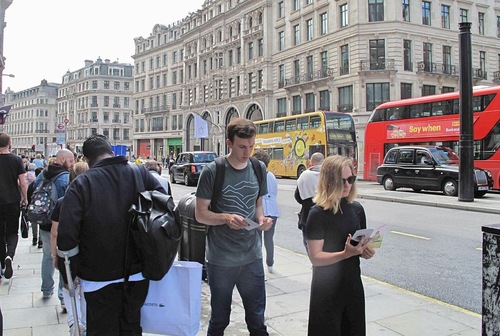 Two doctors from a London hospital, Ben and Emma read fliers about Falun Gong after watching the parade. Ben remarked: “This is shocking, as I just read about the forced organ removal [crimes] on the flier. It is very inhuman, upsetting. It's not just we doctors, but rather everyone would have the same feeling.” 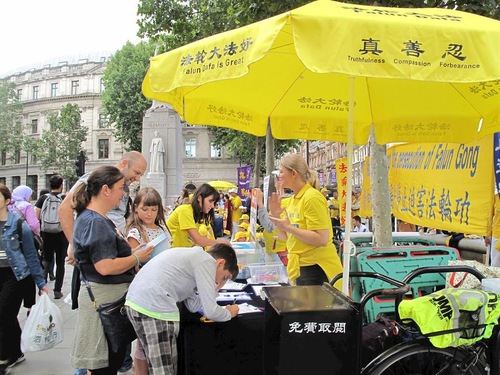 All four members of Lavia's family from Budapest, Hungary, signed the petition. 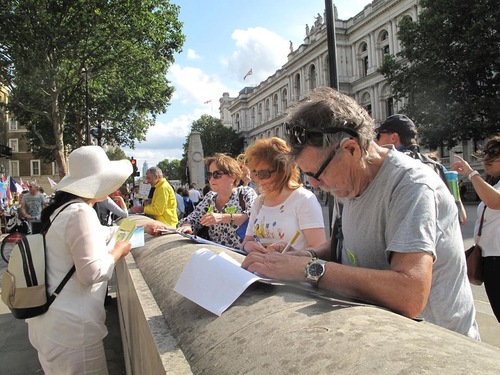 Joseph, a retired professor from Portugal, signs a petition at a Falun Gong activity near the Prime Minister's Office. “It's too bad that the persecution has lasted for 20 years. I wish I could help you,” Joseph said, “The Chinese government has no morals. Just think, they killed thousands of people in Tiananmen Square in 1989. They have no tolerance, not at all.”

Michael, an older gentleman, came from Preston for an activity in London on the same day and signed the petition

“I believe Falun Gong's principles mean peace and it reminds me of Gandhi's peaceful movement in India that successfully ended the British's colonial autocracy,” Michael said. “The persecution will not last forever. I don't know what will happen next, but I know the situation is changing now.”

“Czech, France and Canada: Rallies and Candlelight Vigils Mark the 20th Anniversary of Protesting the Persecution”

“Once Imprisoned for Five Years, Gansu Woman Detained Again for Her Faith”