(Minghui.org) The annual Bayreuth Festival is one of Germany’s most important classical music events, and many spectators from all over the world attend every year. Falun Gong practitioners in Germany set up a booth at the festival from July 25 to 28, 2019.

At the opening ceremony on July 25 in Bayreuth, practitioners distributed fliers with information about Falun Dafa. They also raised awareness of the ongoing persecution of Falun Dafa in China, handed out keepsakes, and demonstrated the five Dafa exercises. A schedule of their activities was published in the Bayreuth Daily a day before the opening ceremony. 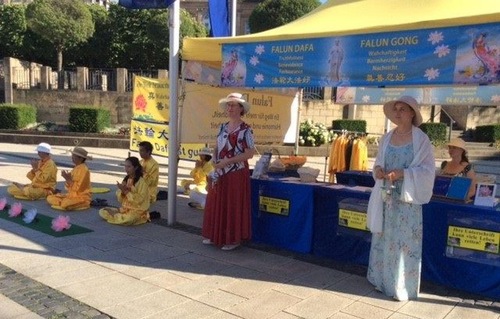 Falun Gong practitioners set up a booth to tell festivalgoers about the meditation practice and the 20-year-long persecution in China. 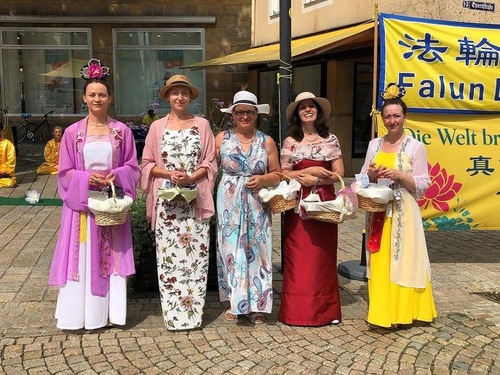 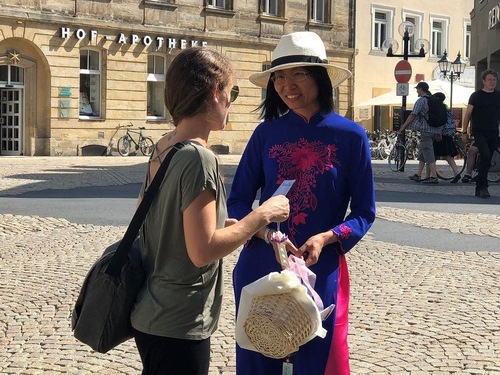 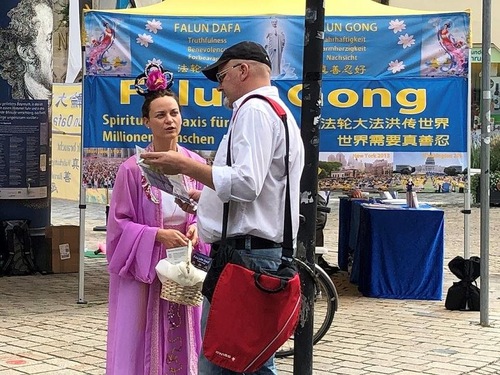 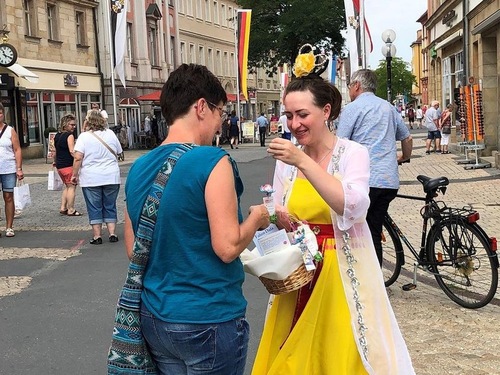 Informing spectators about the ongoing persecution in China 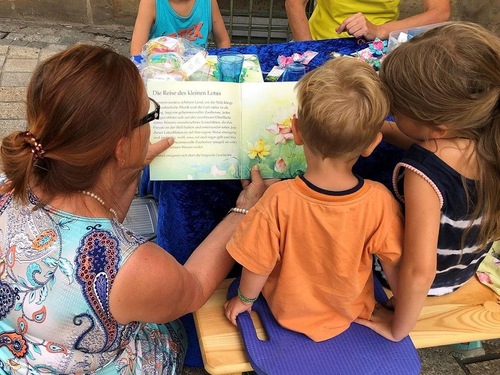 A practitioner reads the “Story of a Little Lotus Flower” to several children. 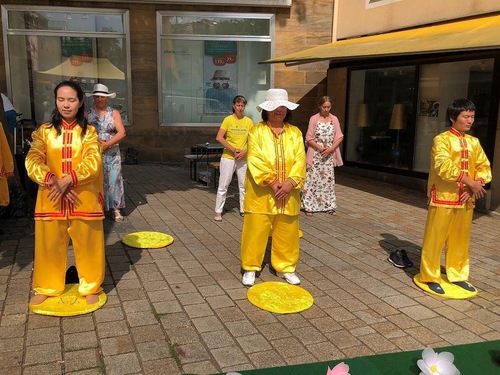 Spectators were drawn to the booth and listened to information about Falun Gong. Many signed the petition asking for an immediate end to the persecution. Some sent cards to the practitioners, thanking them for their efforts.

Although the temperature was reported to be 104F, the practitioners demonstrated all five exercises out in the open. Many spectators took photos and asked where they could learn the exercises. 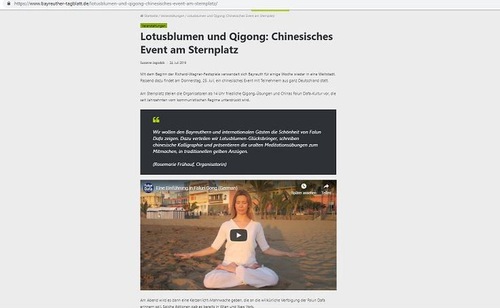 A day before the festival, the local newspaper Bayreuth Daily posted a schedule of the practitioners’ activities during the festival. The article quoted Ms. Fruehauf, Falun Gong’s event organizer: “We want to show the great benefits of Falun Dafa to people from Bayreuth and the world.” The article introduced Falun Dafa and mentioned the persecution.

On Friday, the practitioners told a man about the Chinese communist regime’s practice of removing organs from living practitioners who have been detained for refusing to renounce their faith and that anesthetics are not used. Their organs are sold mostly to foreigners who can afford the transplants.

The same man returned the next day and said that he couldn’t sleep the night before because “I absolutely cannot understand how come the German media and government do nothing. Especially given Germany’s history—how can the Germans remain silent about the persecution of Falun Gong practitioners in China?” He thanked the practitioner and said that he would tell more people about the persecution.

Even before the booth was put up, a man wanted to sign the petition protesting the persecution. “I know about the persecution. I often travel to Frankfurt on business and have come across practitioners there, too,” he explained.

A woman was very interested in Chinese culture and curious about qigong because her grandson had studied in China for a year. When the practitioners told her about the principles of Falun Gong, Truthfulness-Compassion-Forbearance, and the significance of the lotus flowers, she replied, “Exactly. The world now is like a muddy pond, and through the practice you can stay as clean and pure as the lotus flowers.”

After she learned about the persecution that has been going on for 20 years, she was shocked and wasted no time in signing the petition. She was determined to tell her grandson and his Chinese girlfriend about it.