Rally in Front of the Chinese Embassy

Practitioners held a rally in front of the Chinese Embassy in Paris on the afternoon of July 19. 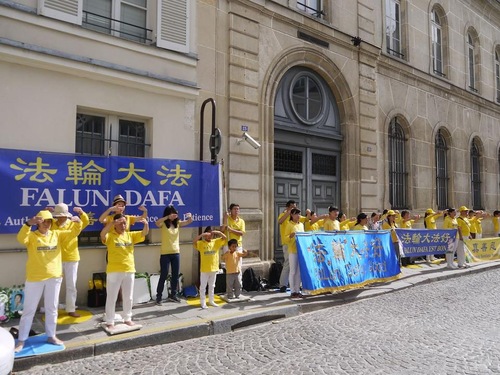 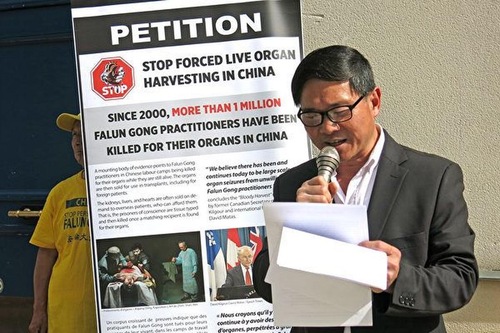 Mr. Tang Hanlong, President of the French Falun Dafa Association, said at the rally: “The Chinese Communist Party regime has slandered Falun Gong and imprisoned, tortured, and forcefully brainwashed its practitioners. According to our records, 4,326 deaths have been confirmed. However, that is far fewer than the actual number of deaths because such information is restricted.

“This outrageous persecution began because of the Communist Party's fear of Falun Gong's popularity, even though Falun Gong is a traditional, self-cultivation practice that teaches Truthfulness, Compassion, and Forbearance.” Mr. Tang called for President Macron to bring up the Falun Gong human rights violations when he speaks with Chinese leaders.

Parade and Rally at the Place du Louvre

More than 1,000 Falun Gong practitioners held a parade and a rally in front of the Place du Louvre on July 20, calling for an end to the persecution. The Tian Guo Marching Band headed the parade, followed by dragon dancers, banners, celestial maidens, a waist drum troupe, and an exercise demonstration team. The procession wound through the Chinese community, the busiest districts in Paris, and major tourist attractions before ending at the Place du Louvre. 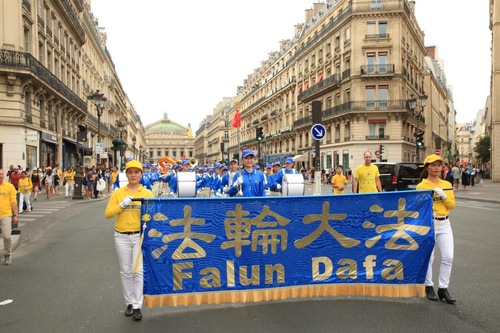 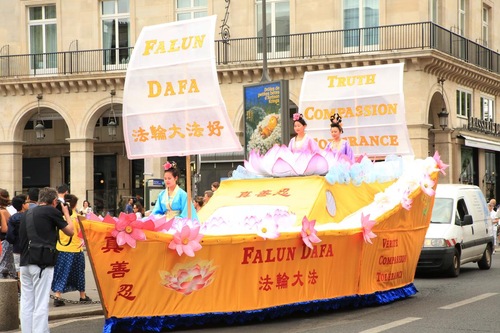 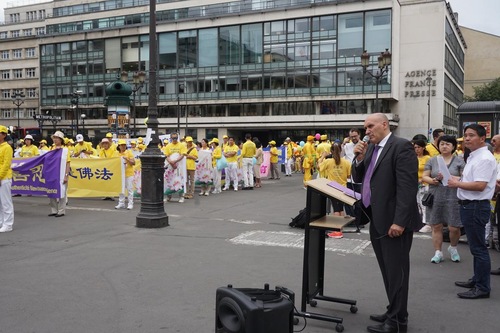 Dr. Harold King, the contact person for Doctors Against Forced Organ Harvesting (DAFOH) in France, speaking at the rally.

Dr. Harold King, the contact person for Doctors Against Forced Organ Harvesting (DAFOH) in France, said in his speech that Falun Gong practitioners were the largest group victimized by the forced organ harvesting in China and a major source of organs for the Chinese transplant industry. He expressed his admiration for Falun Gong practitioners for their peaceful and tenacious undertakings to expose these crimes. 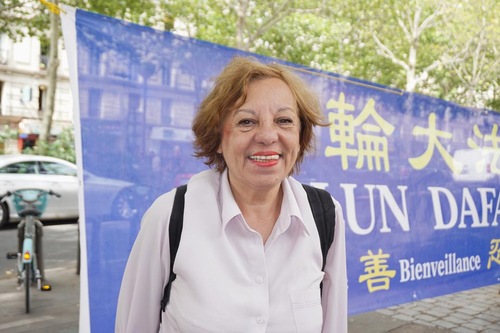 Ms. Marie-Françoise Lamperti, President of Act for Human Rights, expressed her support for Falun Gong during the rally.

Ms. Marie-Françoise Lamperti, President of Act for Human Rights, said that Falun Gong practitioners’ bravery and virtues were admirable. She was very touched to see the activities and wanted to express her support in person.

Member of the National Assembly Francoise Hostalier wrote in her letter of support: “This sad day marks 20 years of a brutal and totally unjustified repression of your practice, and I regret that I cannot be physically among you to commemorate this anniversary. It marks 20 years of arbitrary imprisonment, 20 years of torture, 20 years in China where all those who refused to give up their beliefs became pariahs of society and were deprived of their right to live.

“However, you only believe in a universal principle, summed up in three words: Truthfulness, Compassion, Forbearance.

“The European Parliament has twice condemned this trafficking in human organs, in 2013 and in 2016. France promotes, in its laws of bioethics, the freedom of free donation of organs. It cannot therefore accept international trade of organ transplantation at the cost of human lives and of which French people would be customers unknowingly.

“Dear Friends, you have never responded to violence with violence. As an elected official of the French Republic, I'm proud to represent it and display its values. I would like to say 'Well done!' History will prove you're right and reward you, because you offer a model of resilience and pacifism. I give you all my support and conclude by telling you, as your peaceful protesters arrested in Tiananmen Square said, 'Falun Dafa is great!'” 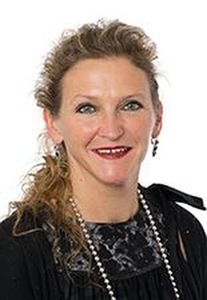 Senator Sylvie Vermeillet for Jura told practitioners, “Your parade unveils the dark heart of a regime that suppresses the democratic freedom of thought.”

Senator Sylvie Vermeillet for Jura wrote, “Today in Paris, your parade reminds us of the peaceful and eternal struggle of the Chinese youth. Your parade unveils the dark heart of a regime that suppresses the democratic freedom of thought. You have my full support in this fight for human rights and freedom, and against organ trafficking.

“My colleagues in the Parliament and I will always work hard to keep France in accordance with the European Union to condemn the horror of organ harvesting as well as the smear and repression on dissidents by a political regime.”

In his letter of support to the rally to express his solidarity with Falun Gong practitioners, Member of the National Assembly Éric Alauzet wrote: “All over China, a system of forced organ harvesting brings in the equivalent of billions of Euros each year and costs the lives of tens of thousands of people.

“France, the homeland of human rights, must be in line with the EU, which condemned these practices with a resolution in 2013 and more recently by the written declaration WD48...The European Union is also asking its member states to raise the issue of organ harvesting to China, recommending that they publicly condemn the organ transplant abuse in China and calling on them to prosecute those who take part in these practices.”

Many people watched the activities and expressed their support. 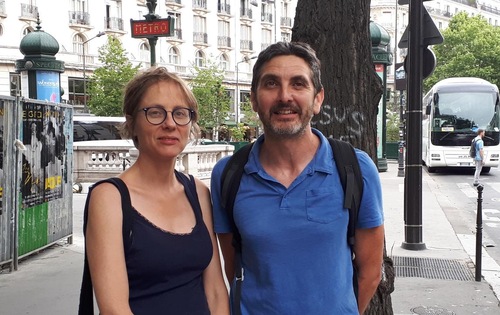 Lucky said, “I'm very touched by the parade. This practice belongs to the Chinese people. I support the victims of the persecution. It should be exposed!”

Laure said, “Truthfulness-Compassion-Forbearance is the culture of the Chinese people. No matter how terrible the persecution is, it can't stop people from making this choice. It's the way things should be. We are lucky to witness it. The parade is a beautiful way to present your ideas.” 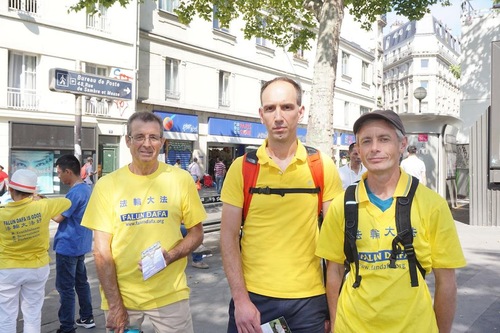 Falun Gong practitioners held a candlelight vigil on the Plaza of Liberties and Human Rights under the Eiffel Tower on the evening of July 20. Dressed in yellow T-shirts, they meditated to mourn their fellow practitioners who died as a result of the persecution. 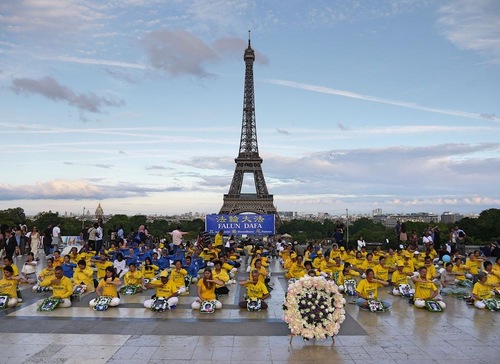 Practitioners held a candlelight vigil on the Plaza of Liberties and Human Rights to commemorate fellow practitioners who have died in the persecution. 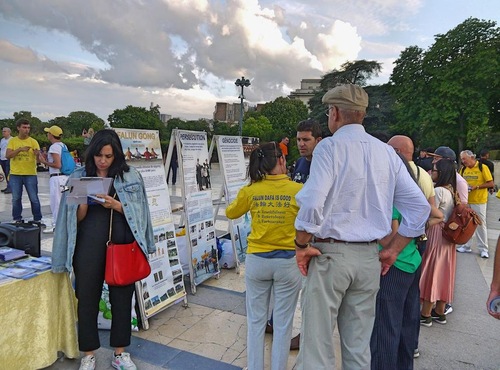 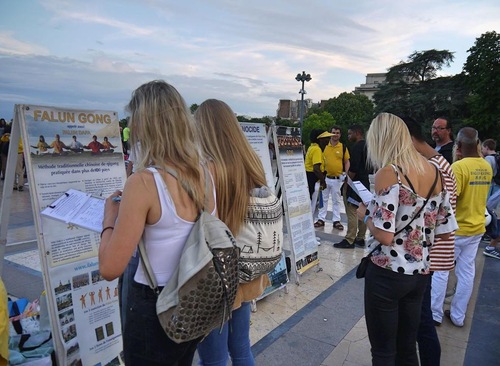 After learning about the persecution, tourists sign a petition calling for it to end. 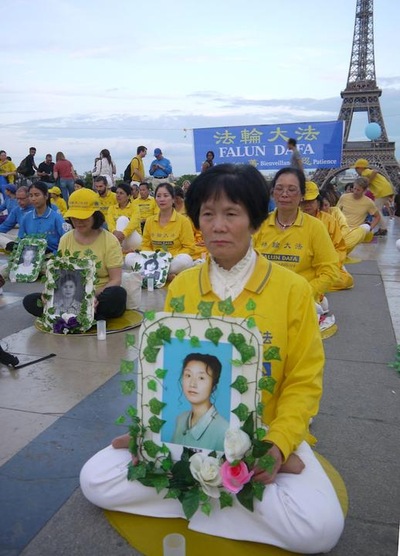 Liu Yumei holds her sister's photo. Her sister, Liu Yueqing, died at age 40 as a result of torture.

Practitioner Ms. Liu Yumei's sister Liu Yueqing was subjected to severe torture, including the tiger bench and being shocked with electric batons, just because she appealed for Falun Gong in Beijing. She died from the persecution in a forced labor camp at age 40. Yumei herself was tortured in 30 different ways when she was in China. She was released on medical parole when she was about to die, and she managed to escape China.

Many people were angry and upset when they learned about the persecution. Some asked, “This is serious. Why hasn't it been reported on TV?” Other people asked how they could help.