(Minghui.org) Nine Falun Dafa practitioners from different areas of Cyprus gathered in Larnaca on Sunday, July 21, at the beautiful palm beach promenade called “Phinikoudes,” next to a medieval castle.

They held an activity to raise awareness of the persecution of Falun Dafa, which was initiated by former Chinese Communist Party leader Jiang Zemin 20 years earlier. 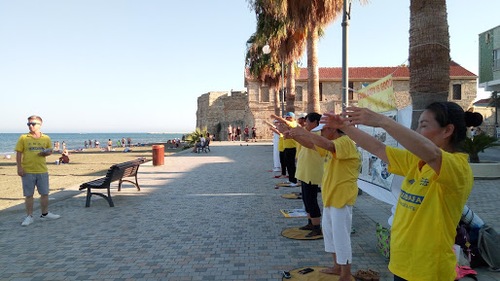 While seven of the practitioners demonstrated the meditative Dafa exercises, the other two talked to passersby and distributed flyers and paper lotus flowers.

One middle-aged Cypriot couple was interested in learning more about the practice. After hearing about the persecution of Falun Dafa practitioners in China, the husband said, “You know, all this is because of communism.” He added, “I have a friend who is doing business in China. He visited a factory where he saw a devastating image of children working like slaves for a piece of bread.”

“Now communism is praised everywhere, and people don’t know what misery it brings. All these crimes [committed] in history, now North Korea and China, and still people think it’s something good.” He and his wife both signed a petition to bring Jiang Zemin to justice. In conclusion, he said, “I wish you success and [hope you] finally manage to save the world!” 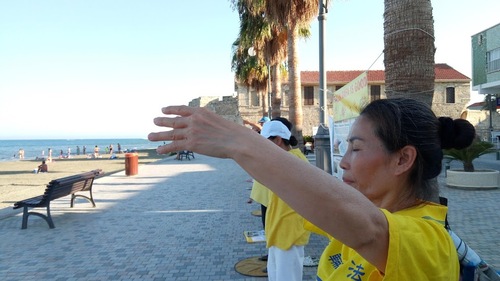 Another couple came and sat on a bench. The wife was Chinese, and the husband was a Westerner. She asked her husband to take a photo of her in front of the practitioners demonstrating the exercises and their banner. He said, “My wife cannot sign [the petition], but I will.”

He said they live in China and know about the persecution. The young Chinese woman agreed to quit the Communist Party and its affiliated organizations after learning of the persecution of Falun Dafa.

A Cypriot woman watched the practitioners with her son, and they were both interested in learning the exercises.

“India: Peaceful Protest to Raise Awareness of the 20 Year-Long Persecution in China”