Since July 20, 1999, when Jiang Zemin's regime launched the persecution of Falun Gong, practitioners have embarked on an incredible journey to expose the persecution and call for its end. 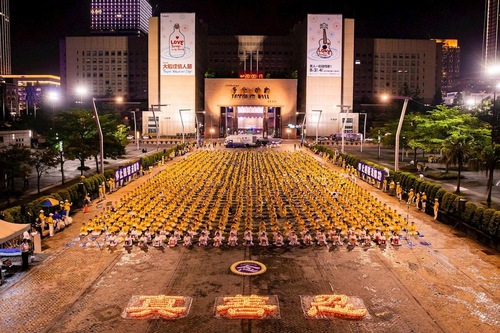 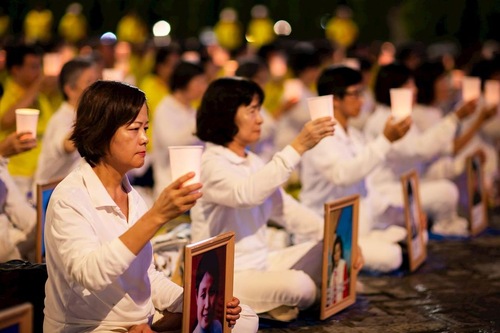 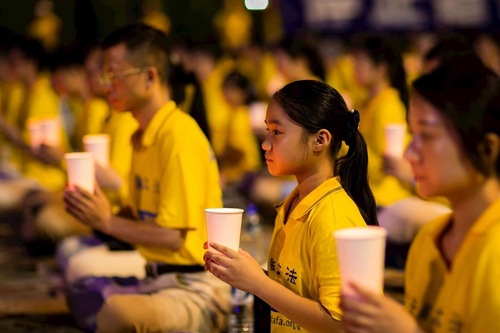 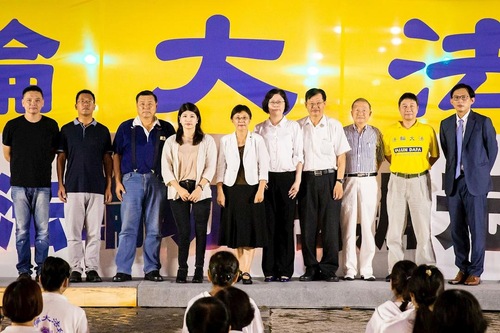 'Disintegrating the CCP is the Only Way to End the Persecution' 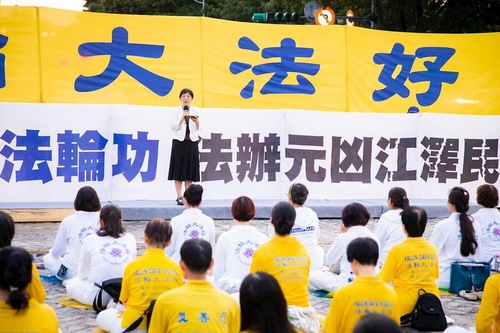 Chang Chin-hwa, president of the Taiwan Falun Dafa Association, speaking at the rally

Ms. Chang Chin-hwa, president of the Taiwan Falun Dafa Association, said in her speech at the rally, “According to information gathered by the Minghui website, more than 4,300 Falun Gong practitioners have died from the persecution. Third-party investigations have concluded that tens of thousands to more than 1 million practitioners have died from forced organ harvesting.

“More and more people are stepping forward to condemn the persecution. In Taiwan, 60 human rights resolutions have been passed by the Legislative Yuan and government offices of different levels. More than 1.5 million Taiwanese have signed petitions calling for an end to the persecution and to bring Jiang Zemin to justice.”

Ms. Chang stressed that disintegrating the CCP was the only way to end the persecution.

'We Must Face the Extreme Evil and Suffering' 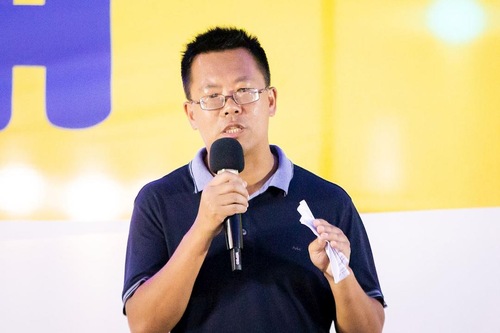 “Every Falun Gong practitioner I represented had been detained and inhumanly tortured. The severity of the persecution is beyond imagination. The details of the torture and the heinous behavior of the perpetrators were so appalling that they are hard to believe,” he said.

Mr. Teng found the international community's silence even more shocking than the torture and murder.

“It takes true courage to face the facts,” he said. “We must face the extreme evil and suffering. They won't disappear out of neglect. On the contrary, silence makes room for things to get even worse.

“No matter where you live, Hong Kong, Taiwan, China, the U.S. or Europe, if we don't want to live with lies and terror, and don't want our children to be enslaved, we must unite and fight back against the CCP's tyranny. We will see the CCP's dictatorship collapse and China become free and democratic!”

'Thanks to Falun Gong Practitioners for Staying Firm!' 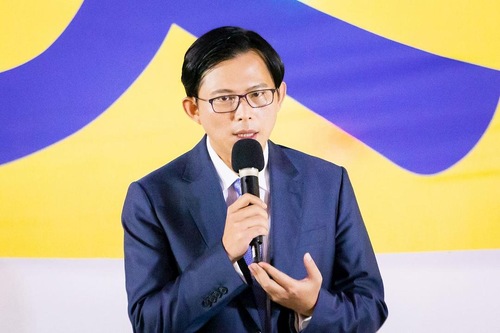 He thanked practitioners for staying firm in their belief despite their suffering and said he believes that one day, the CCP regime will collapse and freedom will bloom in mainland China. 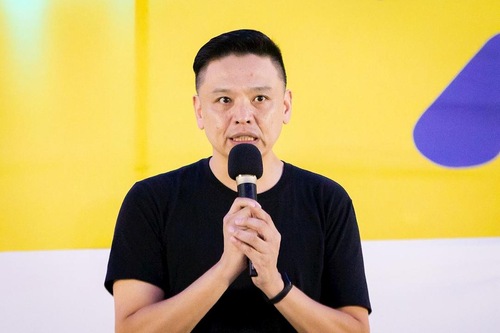 Taipei City Councilor Hung Chien-yi said it was heart-wrenching to see pictures of Falun Gong practitioners who had died from the persecution.

“The Chinese Communist Party would have been more oppressive without Falun Gong practitioners repeatedly exposing its crimes,” he said.

He thanked practitioners for their great efforts and sacrifices and said he believed the regime, which is without respect for human rights, was doomed.

Falun Gong Has Brought the Power of Peace to the World 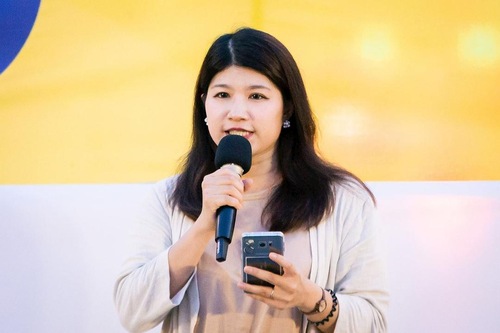 Hsinchu County Councilor Yu Hsiao-ching said the situations in Hong Kong and mainland China were alarming to the Taiwanese people. Uyghurs, Tibetans, and Falun Gong practitioners have all been inhumanly treated.

She pointed out that the CCP's definitions of good and bad were the opposite of our definitions, because the CCP viewed mothers who protested for their children's safety and protesters who had barely escaped being murdered by the CCP as bad people.

She thanked Falun Gong practitioners for bringing the great values of Truthfulness-Compassion-Forbearance and the power of peace to the world. 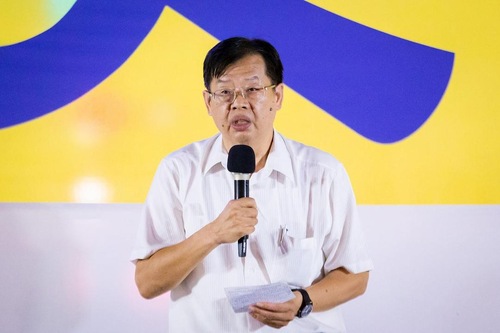 Renowned Taiwanese human rights lawyer Wei Chien-feng said that the Chinese Communist Party wants to control the whole of society and can't tolerate a non-communist group. That is the nature of dictatorships around the world.

He saluted Falun Gong practitioners, Taiwanese human rights lawyers, and the groups who have been supporting Falun Gong's efforts to bring an end to the persecution. 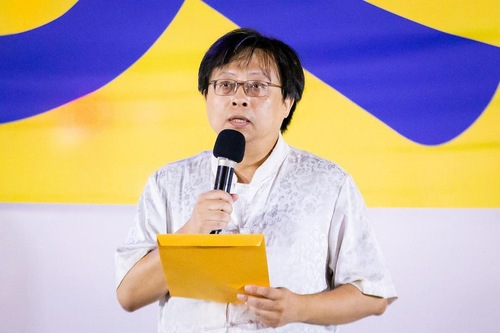 Tseng Chien-yuan, chairman of the New School For Democracy

Chairman of the New School For Democracy Tseng Chien-yuan said the CCP's persecution of Falun Gong had destroyed mainland China.

“Due to the persecution, they’ve lost their traditional cultural and moral values that are found in every Falun Gong practitioner here and are being spread to every corner of the world,” he said.

He thanked practitioners for their unwavering pursuit of Truthfulness-Compassion-Forbearance and stressed that it was our collective responsibility to hold the torch and reignite these values in mainland China one day.

The CCP's Days Are Numbered 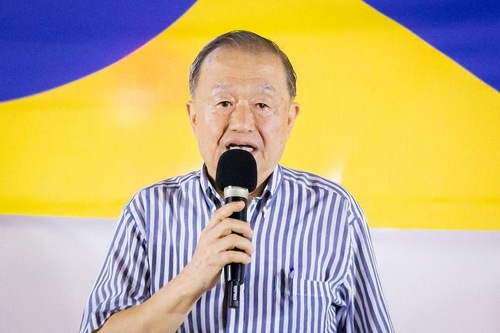 Kao Wei-bang, president of the Victims of Investment in China Association

Kao Wei-bang, president of the Victims of Investment in China Association, said he admired Falun Gong practitioners' great work over the past 20 years, because they had relied on themselves to establish media in many different languages to expose the CCP's evil regime to the world.

“The CCP's days are numbered,” he said.

“Vancouver, Las Vegas, and Hawaii: Rallies and Candlelight Vigils Commemorate Those Who Have Died During 20 Years of Persecution”