(Minghui.org) LifeSiteNews published an article about the Chinese regime’s organ harvesting crimes based on a video interview recorded in Rome last week with Steven Mosher, founder and president of the Population Research Institute. The interview was hosted by LifeSiteNews editor-in-chief John-Henry Westen. 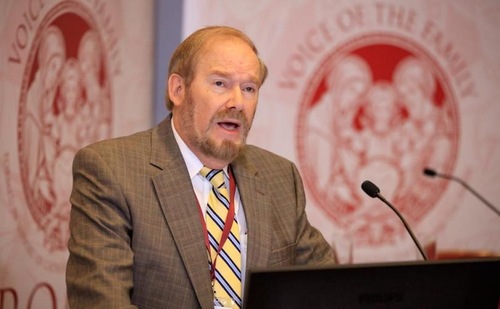 Steven Mosher, founder and president of the Population Research Institute

The article was written by LifeSiteNews staffer Diane Montagna and opened with the following paragraph:

“The Chinese government is harvesting organs from prisoners while they are still alive to supply its lucrative organ transplant industry, a leading expert on China has told LifeSiteNews.”

Mosher is an author, social scientist, and authority on China's population control policies. He said that the Communist Party progressed from its decades of forcing prisoners to kneel and shooting them in the back of the head and then extracting their organs to using “more advanced” techniques. He said the regime is now paralyzing their victims in order to extract their organs while they are still alive and breathing.

He told LifeSiteNews that China's systematic execution of prisoners for their organs “began in earnest in the 1990s, when the Buddhist sect known as Falun Gong were being arrested by the hundreds of thousands.” “We began to get horrific first-person testimony of how some prisoners were being taken out and executed specifically for their organs,” he continued.

Why are there such short waiting times?

Mosher told LifeSiteNews that there has always been “something peculiar” about China's organ transplant industry. In the world's most developed nations, a patient has to wait between six months and years for an organ with a matching tissue type in the case of a heart or a kidney. In China, it normally takes no longer than a week to locate a matching donor organ and sometimes as little as 24-48 hours for a heart, a liver or a kidney.

“The only way that can happen is by having a million people … who’ve already been tissue typed,” Mosher told LifeSiteNews. “They put the tissue of the prospective buyer of the organ into the computer and when a match comes up that person is executed, and their organs are taken out and immediately transplanted into the buyer.”

Mosher told LifeSiteNews that the Chinese regime has “gone to great lengths” to deny that these crimes are taking place.

He said that the Chinese regime created a program in 2010 to show the world that “voluntary organ donations are increasing dramatically” and that these organs were acquired legally “from people who give their informed consent.”

He said the Chinese regime’s claim of an increase in voluntary organ donation was propagated to convince the world that millions of Chinese people have now decided to voluntarily donate their organs.

“If you put it all together — the speed at which you can get a transplant, the fabricated data, the reports of consent being extorted from individuals — it’s not a pretty picture,” Mosher told LifeSiteNews. “We still have massive human rights violations in China. This is a question of literally killing people for their organs to make a profit off them.”

“This is big business,” he continued. “It’s business that Communist Party officials are probably profiting by, and it’s a business that they’re unlikely to want to give up unless there’s tremendous international pressure.”

“Forever Grateful to Be a Dafa Disciple”