(Minghui.org) Falun Gong, also known as Falun Dafa, was introduced to the public in Changchun, Jilin Province, China on May 13, 1992 by its founder Mr. Li Hongzhi. The practice has since spread to over 100 countries.

May 13 was declared “World Falun Dafa Day” in 2000. On the occasion of the 20th Falun Dafa Day and also the 68th birthday of Mr. Li, Falun Dafa practitioners around the world have held celebratory events to let people know about this ancient spiritual practice and to express their gratitude to Mr. Li.

Practitioners from Toronto held celebratory events for several days, including a concert at a community center on the evening of May 10, 2019. Twenty-six programs were performed as a gift to the community. 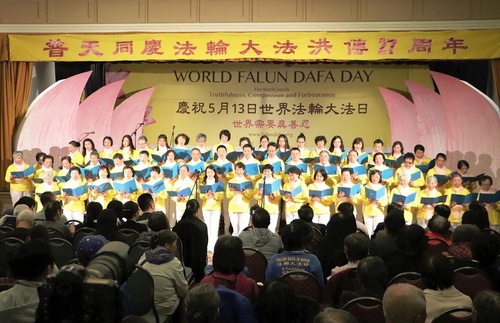 Choral performance by practitioners to raise awareness at tourist attractions. 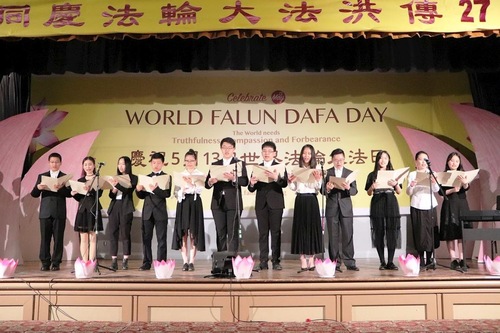 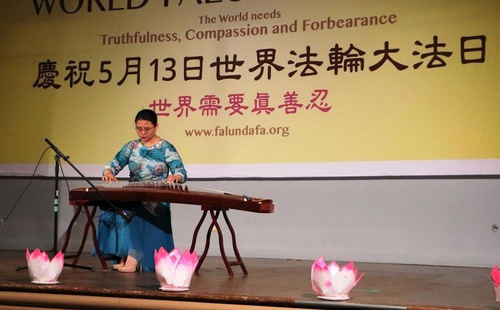 A musical performance with the Chinese musical instrument, the guzheng. 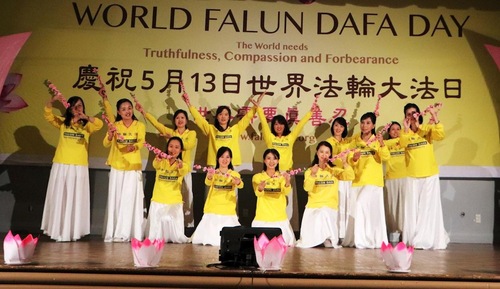 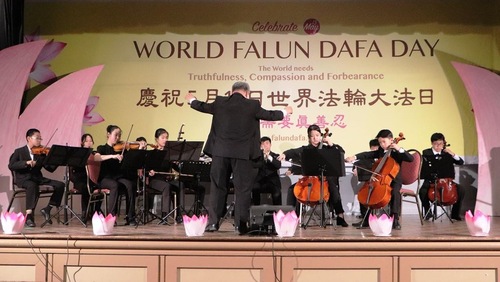 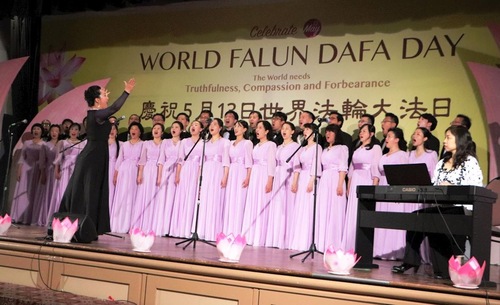 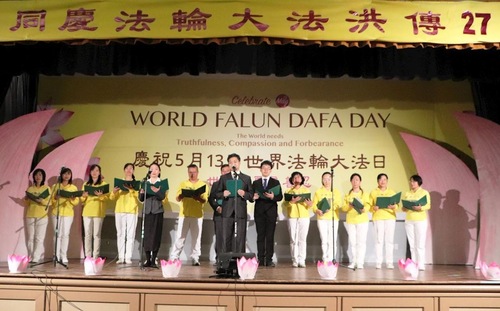 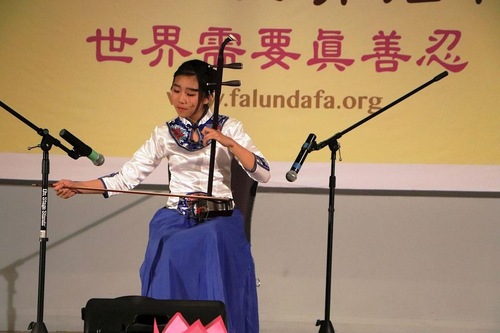 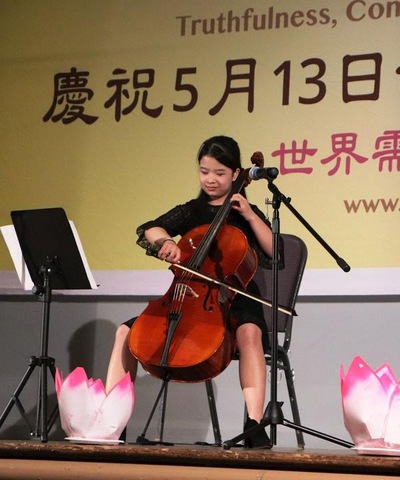 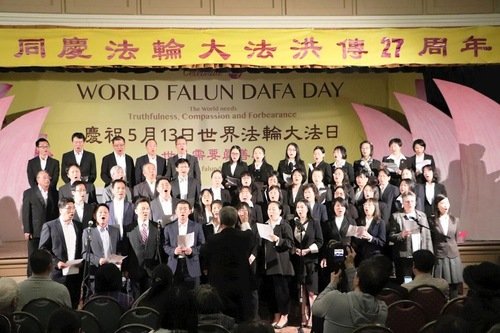 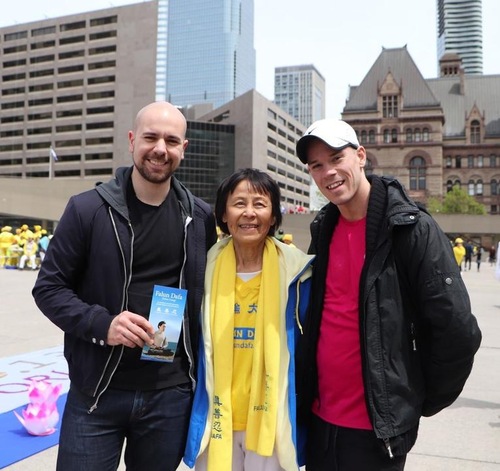 Agnes, who is now 82 years old, excitedly recalled how she began practicing Falun Gong. Although she was born in Hong Kong she grew up in Vancouver. She is a native English speaker and did not speak Chinese.

Agnes was hospitalized in Vancouver in the summer of 1999. Doctors were unable to diagnose her illness and she was in a semi-sleepy state for nearly three months. She said, “My friend told me about Falun Gong. That October I moved to Toronto. When my daughter took me to a health expo I saw a Falun Gong booth.”

“As soon as I heard the music, I felt comfortable and relaxed. It was a feeling I had never experienced before. The practitioners looked so peaceful while they meditated! The music and the meditation felt so natural and somehow familiar that I decided to practice Falun Gong.”

She said, “In 1999, I needed crutches to walk. I began practicing Falun Gong on January 23, 2000. Soon afterwards, all my illnesses disappeared. I threw those crutches away!”

“Not only could I walk, I could run. I no longer needed to take medication for hypothyroidism every day. My insomnia disappeared. My dizziness, asthma, and hay fever all disappeared.”

“By following the principles of Truthfulness-Compassion-Forbearance, I've become a better person. I think the most amazing change I've experienced is my ability to learn. When I started learning to read the book Zhuan Falun in Mandarin, I was 63 years old. I felt like I was full of knowledge and wisdom.

“I didn't intentionally try to learn Chinese. But when I listened to the other practitioners reading aloud in Chinese, I felt that I could. I began to listen to the recordings of Master Li’s teachings. I could feel that Master was talking to me. Six years later, I was able to read Zhuan Falun in Chinese.”

She continued, “After I began practicing Falun Gong, my family became harmonious. My daughter and grandchildren are happy. My brothers and sisters are also very happy that I practice Falun Gong.

“I feel that every day is very meaningful. I go to the municipal square every week to practice the exercises and then tell passersby about the benefits of practicing Falun Gong. Sometimes I distribute information about Falun Gong, or collect signatures.”

Falun Gong practitioners gathered at the Royal Garden in Stockholm to celebrate World Falun Dafa Day on May 11, 2019. They did the exercises, talked about their experiences, and talked to people about the persecution. 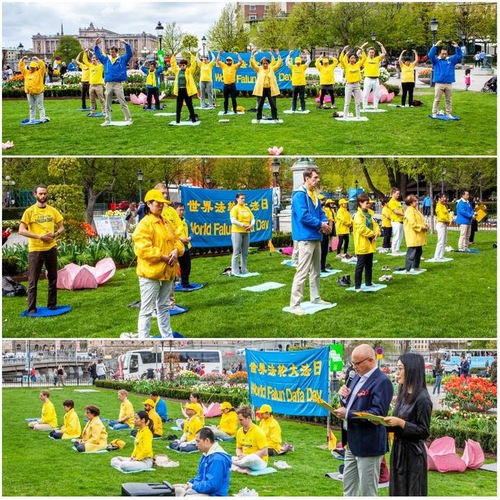 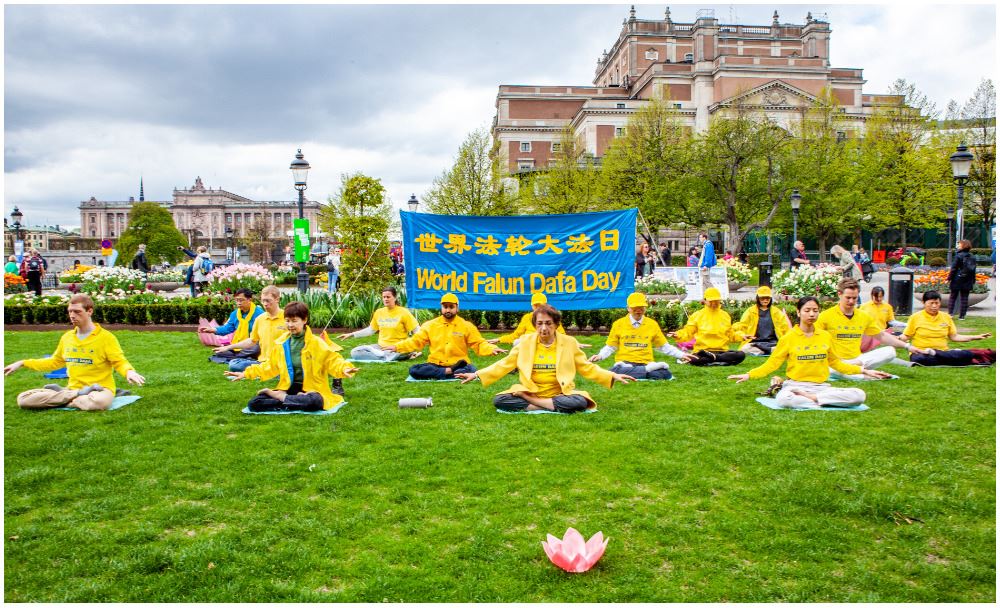 Practitioners gathered to do the exercises and celebrate World Falun Dafa Day at the Royal Garden in Stockholm on May 11, 2019. 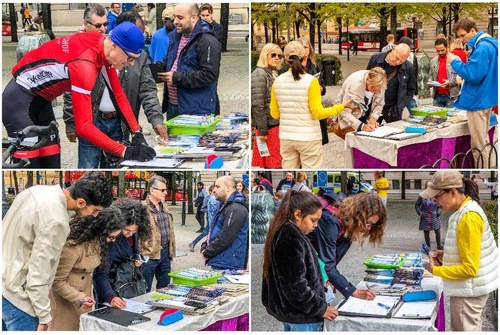 Visitors sign the petition calling for an end to the persecution.

Attracted by the soothing music, a middle-aged couple stopped to watch the practitioners do the exercises and then carefully read the posters. The lady said, “Watching you practice the exercises makes my heart feel warm and calm. The persecution is absolutely shocking!”

She added, “It's very good that practitioners are having activities here, to raise awareness. Let more people know so they can pay attention to this matter.” Before they left, the couple signed the petition condemning the persecution.

Falun Gong practitioners in Kaohsiung held several activities to commemorate World Falun Dafa Day. They went to the Ruifeng Night Market and talked to people about the persecution, and demonstrated the exercises. They also gathered to study the teachings and talked about their own cultivation experiences. 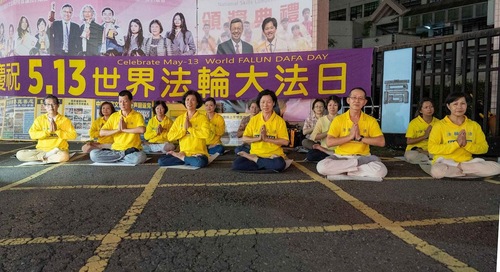 Falun Gong practitioners from Kaohsiung talked to people about Falun Gong and the persecution at the Ruifeng Night Market on May 11, 2019 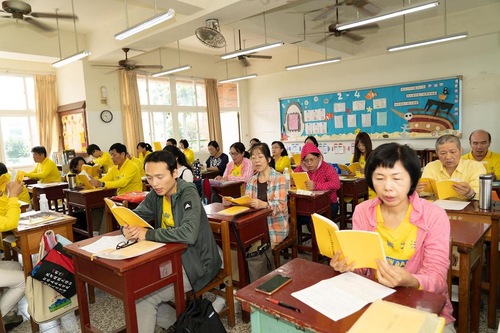 Studying the teachings in Kaohsung on May 5. 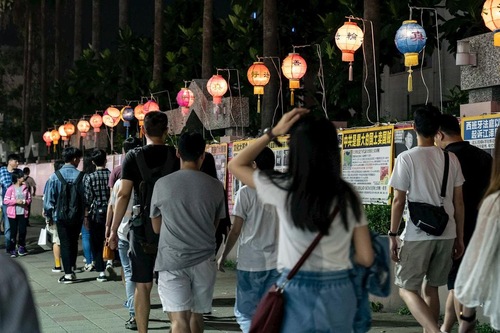 Practitioners set up posters along the side walk to Ruifeng Night Market on May 11. 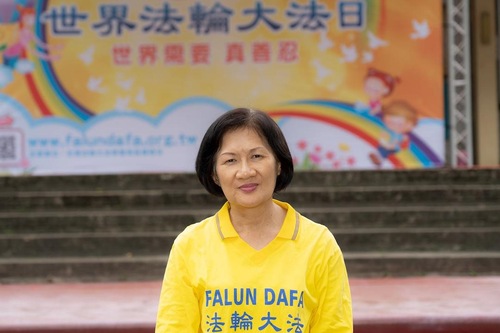 Shi Fang often goes to the Ruifeng Night Market to raise awareness of the persecution. She's a retired primary school teacher and her special expertise is in art. She had serious insomnia when she was young and only slept for about an hour each week. She also had very serious constipation and anemia.

When Shi Fang's situation seemed most desperate, a colleague suggested she try practicing Falun Gong. Soon after she began practicing, her various illnesses disappeared. She became healthy and was extremely happy.

Shi Fang posted the words “Truthfulness-Compassion-Forbearance” on her classroom's bulletin board so her students could remember them.

She also taught her students to play the flute and sing songs composed by practitioners. The atmosphere in Shi Fang's classroom was always peaceful and happy. Her students' temperaments improved and their parents were happy to see their positive changes.

She said, “When I used the principles of Truthfulness-Compassion-Forbearance to guide my students, it was the most fulfilling and beautiful time in my career. I thank Master Li for his great teachings! I wish Master a happy birthday.”

“Singapore: Celebrating the 27th Anniversary of Falun Dafa’s Introduction to the Public”