(Minghui.org) Falun Gong, also known as Falun Dafa, was first made public in Changchun, Jilin Province, China on May 13, 1992 by Mr. Li Hongzhi. This traditional mind-body cultivation practice has since spread to over 100 countries around the world.

May 13 was declared “World Falun Dafa Day” in 2000. On the occasion of the 20th annual World Falun Dafa Day, and also the 68th birthday of Mr. Li, Falun Dafa practitioners around the world have held celebratory events and expressed their gratitude to Falun Dafa's founder for the wonderful benefits of the practice.

Practitioners in Germany, Austria and Switzerland shared how after taking up cultivation in Falun Dafa, they gained good health and have been spiritually uplifted. Many practitioners have said that they have become much more patient and can look within when encountering conflicts, to see where they can do better.

From a Lonely Girl to a Strong Mother

Silvia from Germany began to practice Falun Gong in 2006. When she was a child, she was very different from other children. She recalled, “I did not want to say bad things about other girls or argue with them. Many children did not want to play with me. Sometimes others yelled at me and even hit me.

“There were times when my mother grew anxious about my behavior. She told me, 'You have to fight back!'”

She asked her father when she was 10 years old, “Dad, why did I come to this world? What is my mission? Where do I come from? Where am I going?” Her father just thought it strange and wondered whether their was a problem with his child’s education.

“Sometimes,” Silvia recalled, “I even wondered if I really had a problem. I felt that I was not understood and felt very lonely.”

After she began practicing Falun Gong, everything changed. “I received the book Zhuan Falun [the main book of Dafa], when I was young. I finshed this book within a few days. I can't describe in mere words what happened to me. My long-term pursuit finally came to an end. All my questions were answered. All my doubts about myself disappeared. I finally found out how to be a better person, why I am here and what my mission is.

“Now, I am a mother and teach my children to live by Dafa's principle [Truthfulness, Compassion, Forbearance]. I tell them that it is right to be good and not to follow the disgraceful trends [of today]. This not only makes me strong, but also allows my sons to firmly believe in themselves.

“My children also read the Falun Dafa books and sometimes meditate. They are more and more confident about their abilities and constantly improve themselves. This is also helpful to me. We are very grateful to Dafa for the goodness we experience in our life. We will continue to improve on this [cultivation] path.”

Middle-aged Mother: It's Become Easy to Educate My Children Well 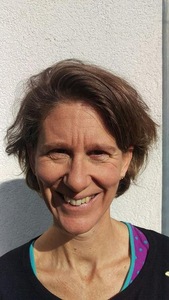 Sybille from Switzerland is 45 years old and began to practice Falun Dafa 15 years ago. After she took up the practice, she stopped using swear words in her conversation. After reading Zhuan Falun, she knew that she should pay attention to everything that she says. As a result, bringing up her children has become easier.

“In general,” Sybille said, “mothers have to correct the [behavior of their] children. But, our family does not need to do this. My children know what words to use and which ones not to. I don't need to correct them any more.”

Not only did she benefit in educating her children, Sybille also mentioned that she “does not need expensive skin care products and hair dyes.” Sybille's hair is still its original color and her skin is soft and youthful looking.

“By practicing Falun Dafa,” Sybille said, “I have become very relaxed. If the human mind is relaxed, one appears relaxed, and life becomes harmonious. One looks attractive to others. This is not anything tangibly expressed, but it is [something that shines] from the heart.”

Veteran: Starting New Life after Dealing with the Lows of Life 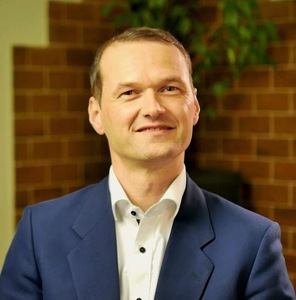 Erik from Germany is now a news announcer. He recalled the gloom he felt during his military service in Kosovo in 2001. He recalled, “I experienced a lot of things there. [After I came back,] I fell into an emotional vortex. I imagined that I'd return to the same life I had before, but I could not do it. I had to think more about death, life, and the meaning of everything.

“When I was experiencing a crisis, I was exposed to Falun Gong. This is certainly not a coincidence. For many of my problems, including those that I may not have immediately recognized, I received an answer that was important to me. I realized that I could start a new life.” 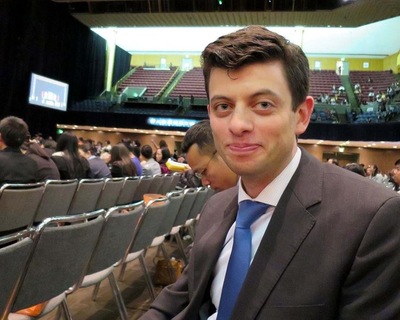 Dimitri, from Germany, now works for a media company. He recalled that when he was in training in a large international company, the work pressure was extremely high, causing insomnia. During this time, his father advised him to practice Falun Dafa.

He recalled, “He (my father) brought me the [exercise instruction] video. So I practiced the Falun Dafa exercises before going to bed every day. I could fall asleep immediately, and slept through the night, after doing the exercises. I was surprised, as I soon felt energized, and I became more motivated in work.”

Educator: “Dafa Gives Me the Life I Always Wanted.” 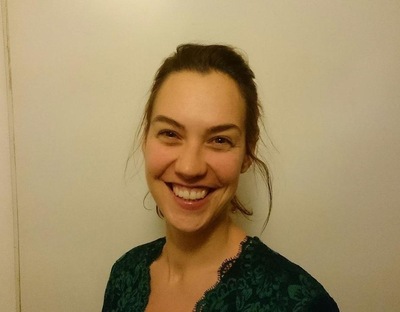 Nathalie is an educator from Austria. She said, “Dafa helped me to get rid of a drug and alcohol addiction easily. The physical and mental problems were suddenly blown away as if by a gust of wind. I could develop a serious and healthy relationship with a man, and then get married. We have two healthy children now. Dafa has given me the life I always wanted.”

Trainee for Cultural Supervisors: I Have Peace of Mind After Understanding the Principle of Karmic Retribution 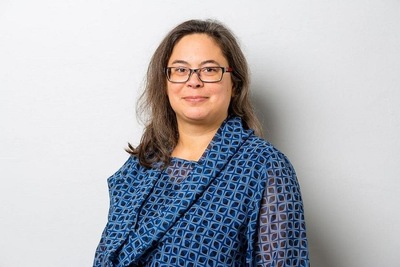 Nina from Switzerland was a sales assistant and is now attending training as a cultural director. She said, “It is important to maintain a calm, friendly and compassionate mentality, balance the mind, and put away those thoughts that do not meet [the principles of] Truthfulness-Compassion-Forbearance.”

When she took her daughter to a dentist, a female doctor looked at her in an unfriendly manner several times. She recalled, “I immediately understood that this unfriendly attitude had nothing to do with what I was doing.”

At first, Nina was bothered by the doctor's attitude toward her. But she shared that when she thought over the issue from the perspective of practicing Falun Gong, “I changed my perspective and looked within. I realized that this (unfriendly attitude) happened because of karmic retribution.” Once she understood this and stopped being emotionally affected by it, the doctor looked at her in a friendly way.

Large Company Employee: I Can Naturally Give Up All Bad Behaviors 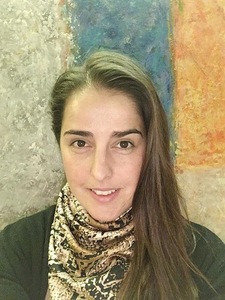 Mariken is a German Falun Gong practitioner who has been practicing for seven years. She is the mother of two, graduated college with a major in business management, and now works on strategic partnership with a large software development company.

She said, “I used to do some incorrect things for power, fame and profit. For personal gain, I told a lie which resulted in problems for others. Later, I started practicing Falun Dafa.

“Thanks to the profound principles of Dafa, I understand what effect my behaviors have on me, my health and my environment. I can now give up any bad behavior. Now, I am an honest, responsible, kind woman, mother and employee.” 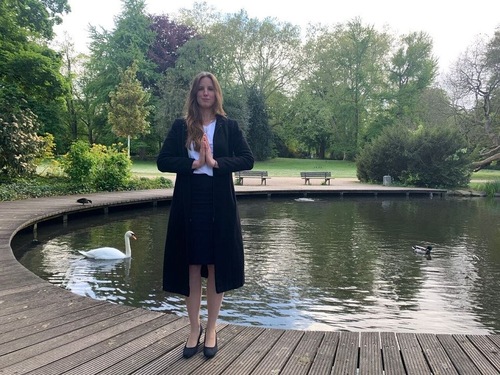 Nathalie is a young dinning hall service worker who lives in central Germany. She recalled, “Before practicing, I had a bad temper and did not like to listen to my parents. After I started practicing Falun Dafa, I understood that I should respect my family members and others. I have more sympathy for them and deal with them more tolerantly. As a result, I became relaxed and there is more fun in my life.” 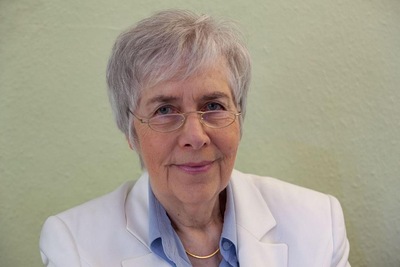 Renate, now retired and a resident of Berlin, Germany, was a therapist who specialized in breathing and sound. She heard about Falun Gong from a Chinese doctor in 1997. She shared, “At that time, I suffered from a pollen allergy, and nothing brought relief.

“Fortunately, there was a Chinese group practicing Falun Gong in Berlin. I joined the practice in January. It was pollen season in May and June. But I didn’t have any symptoms.” 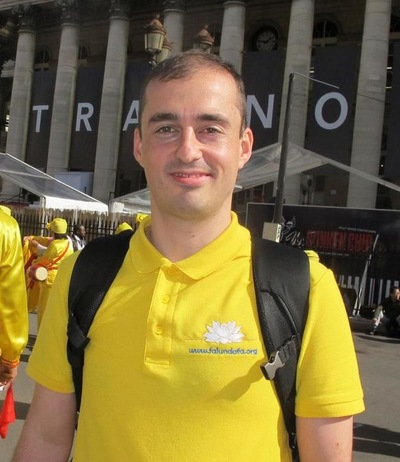 Alexander lives in Berlin, Germany. He is a relatively new practitioner who started practicing Falun Gong in 2016. He is a freelance journalist. Alexander recalled, “I gave up drugs within four days after practicing Falun Gong. Six months later, I realized that the reason for my drug use was that I was very dissatisfied with my parents.

“I also realized that I needed to be calm. Getting to this understanding is generally achieved through a few years of psychiatric treatment. Falun Gong helped me quickly recognize [my problem].” 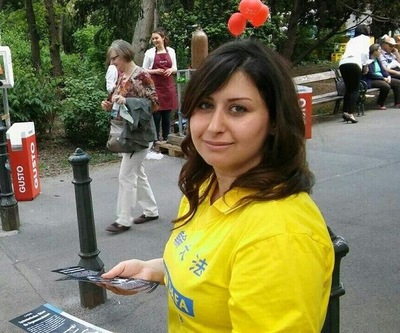 Linda from Austria works as an accountant and is also a karate coach. She said, “Because of strenuous exercises, I used to suffer pain in my back and knees. After practicing Falun Dafa, I changed a lot. Now I am healthy and full of energy.

“Because of Falun Dafa, I learned how to interact with others in a compassionate way.”

As they related their experiences, these practitioners in Europe's German-speaking areas said many times, “Thank you so much, Master Li.”