(Minghui.org) Practitioners in Poland came together to do the Falun Gong exercises as a group in front of the Chinese Embassy in Warsaw, the evening of April 25, 2019. The practitioners were commemorating the 20th anniversary of the April 25 appeal that took place in Beijing in 1999 and protesting the ongoing persecution of Falun Gong in China. 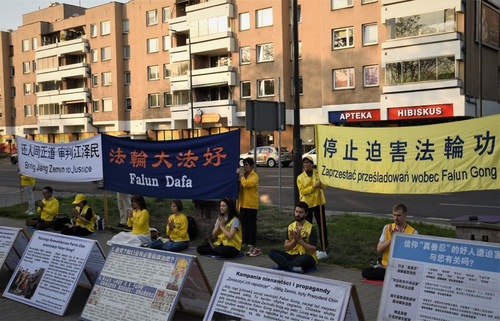 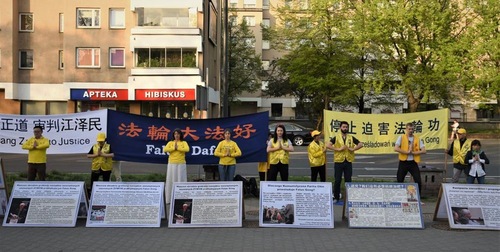 Falun Gong practitioners do the group exercises in front of the Chinese embassy in Poland on April 25, 2019.

“I didn't expect that the persecution had escalated to the point of killing Falun Gong practitioners for organs. This is beyond imagination and utterly unacceptable!” he said.

He left his contact information and said he would like to stay in touch with practitioners. He also commended the practitioners for their courage and ongoing efforts to protect human rights.

A Falun Gong practitioner told the man: “We are thankful for those practitioners who stayed true to their beliefs on that day 20 years ago. Their persistence has inspired groups and groups of people to awaken their consciences after learning the truth about the persecution over the past 20 years. Practitioners' efforts on April 25, 1999, showed the power of Truthfulness-Compassion-Forbearance.”