(Minghui.org) Falun Gong practitioners from Hong Kong and nearby areas gathered at Edinburgh Place, a public square in Central Hong Kong, on April 27, 2019, to commemorate a peaceful appeal that took place in Beijing 20 years ago. At the rally, 1,000 practitioners called for an end to the persecution of Falun Gong in China. 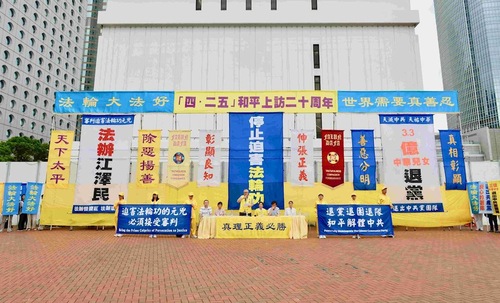 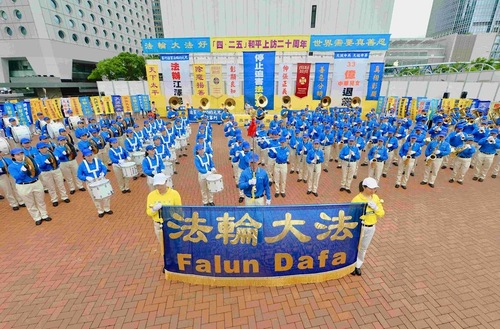 Kan Hung-Cheung, a spokesperson for the Hong Kong Falun Dafa Association, spoke about the appeal that was held on April 25, 1999, in Beijing, two days after practitioners were arrested in Tianjin for their belief. He said the persecution of practitioners by the Chinese Communist Party (CCP) since July 1999 has drawn international criticism. In addition, recent attempts to amend the Fugitive Offenders Ordinance in Hong Kong raised concerns and was viewed as a prelude to more intensified human rights suppression. Moreover, the CCP has recently barred practitioners from other regions from attending peaceful events in Hong Kong, which made people see more clearly the true nature of the Party.

“We have seen increased momentum from around the globe to support traditional values and righteous beliefs by ending the suppression. The day is coming closer to stopping the persecution and these tragedies,” Kan said.

He called on governments and people of all nationalities to help defeat the evil and promote righteousness. By joining together to peacefully dissolve the CCP, reduce the damage it has caused, and bring the key perpetrators of the persecution to justice, humanity will head to a brighter future.

Yi Rong, president of the Global Service Center for Quitting the Chinese Communist Party (Tuidang Movement), spoke over the phone at the rally to congratulate the more than 330 million Chinese people who have decided to separate themselves from the communist regime. “This highlights our courage and commitment to safeguard our consciences and our virtue, which have been the underlying spirit of our Chinese civilization for thousands of years,” she said. 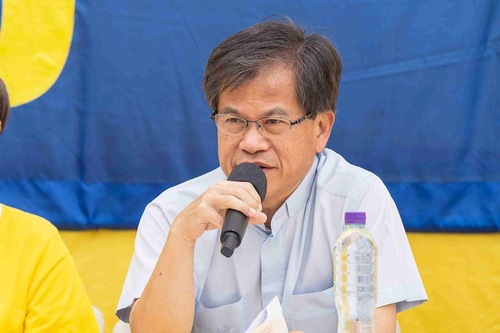 Fung Chi-wood, pastor and former member of the Legislative Council of Hong Kong, praised the kindness and perseverance of Falun Gong practitioners, who over the last 20 years have faced harsh mistreatment at the hands of the CCP. He said this was a good example for modern society and he was glad to see that the practice has been well received in more than 100 nations. He said that the righteous will prevail and the CCP's days are numbered, as indicated by the large number of Chinese people who have severed ties with the regime.

Leung Kwok-hung, another former member of the Legislative Council, criticized the CCP's suppression of Falun Gong in Hong Kong. He said that the Fugitive Offenders Ordinance amendment would negatively affect Hong Kong's religious groups, and he called for more support to quash the proposal.

Several elected officials spoke at the event by video. Leong Kah-kit, chairman of the Civic Party, said that freedom of belief is an aspect of basic human rights. “Throughout history, no political entity would last long if it suppressed people and ignored basic human rights. As long as we are determined and are clear on what we are doing, we will succeed,” he said.

Wu Chi-wai, chairman of the Democratic Party and member of the Legislative Council of Hong Kong, acknowledged the health benefits of Falun Gong, as well as its principles of Truthfulness-Compassion-Forbearance. “Through peaceful means, we are advocating the virtues of truth, kindness, and tolerance. These are exactly the core values of our entire Chinese culture and Chinese civilization,” he said.

Wu said governments should encourage people to speak honestly and tolerate different opinions, instead of forcing citizens to live in a state of constant stress and to struggle against each other.

If a political party acts against the will of the people and harms its citizens, it will be abandoned, said Wu, adding, “From the number of people who have quit the CCP, we can tell that people already have a better understanding of its vicious nature.” He also called on the Chinese regime to stop the persecution of Falun Gong.

Leung Yiu-chung, a long-time member of the Legislative Council of Hong Kong, thanked practitioners for their efforts to expose the CCP's brutality over the past 20 years. “I hope you will keep it up and continue to expose how the regime is throughout the world,” he said.

He said because the CCP suppresses freedom, justice, and human rights, many officials who had worked for the Party have now chosen to abandon it. This was reflected in the fact that 330 million people have withdrawn from the CCP and its affiliated organizations.

Chu Fook-keung, former Government Records Service Director, said he supported Falun Gong practitioners for upholding their principles, and he opposed the persecution. He called for the key perpetrators involved in the live organ harvesting to be brought to justice. “It is state-sanctioned terrorism and simply criticizing it is not enough. We have to resolve [the issue] through legal measures and hold them responsible based on the law,” he said.

Wang Zhiyuan, president of the World Organization to Investigate the Persecution of Falun Gong (WOIPFG), agreed. He said evidence had indicated that forced organ harvesting from living Falun Gong practitioners still continues. He called on governments and organizations around the world to investigate these crimes against humanity.

Numerous human rights advocates spoke at the rally over the phone. Bao Tong, former Policy Secretary for Zhao Ziyang (Chinese Premier from 1980 to 1987, and CPC General Secretary from 1987 to 1989), said former Party leader Jiang Zemin had violated the law by persecuting Falun Gong. It is appropriate and lawful for practitioners to safeguard their legal rights.

Shen Liangqing, former Procurator in Anhui Province, said the suppression against Falun Gong in China lacked legal basis. “The Party has committed crimes of genocide and crimes against humanity,” he concluded. 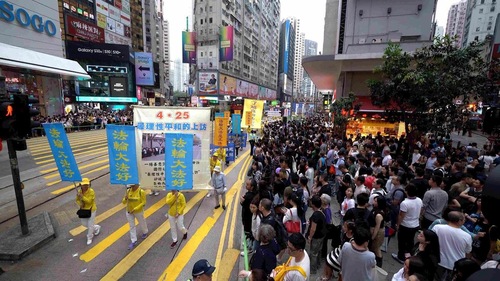 Banners during the march 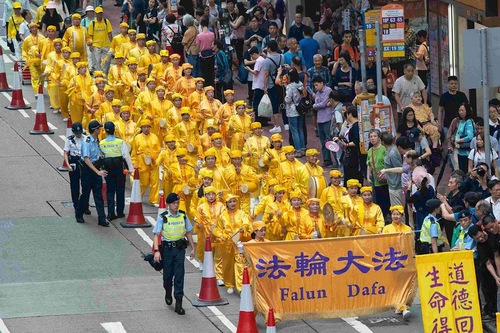 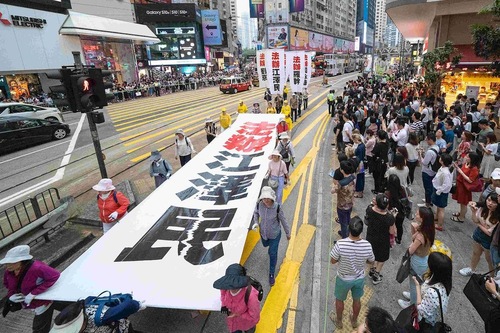 Following the rally, at 2:00 p.m. practitioners started to march from Edinburgh Place to the Hong Kong Liaison Office. Led by the Tian Guo Marching Band, the march was divided into six sections and was completed despite a rainstorm near the end.

Several young women from Guangdong Province said this was the first time they had seen such a procession. “I like it,” said Ms. He, “It is great to become a better person by following these principles.”

Simon, an elderly man, was moved by practitioners' efforts. He said more and more Chinese people are now traveling overseas and thus have access to free information and can learn the facts. “The CCP is doomed—that's for sure,” he said.

One man in his 50s said he had known about the innocence of Falun Gong and its practitioners a long time ago. He feels it is the CCP that should be wiped out. He agreed to renounce his memberships in the Party organizations.