(Minghui.org) Today's news from China includes incidents of persecution that took place in 12 cities or counties in 7 provinces, where at least 15 practitioners were recently persecuted for their belief. 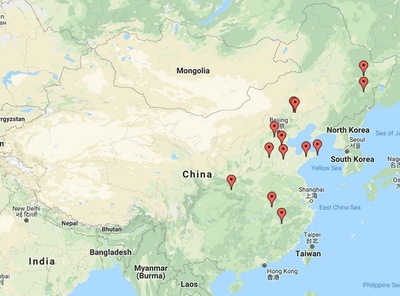 Ms. Fei Shuqin was arrested by officers from the Yilan County Police Department on March 29, 2013 for distributing Falun Gong materials. She was later officially placed under arrest by the Procuratorate. She was sentenced to 13 years in prison by the Yilan County 610 Office and the Yilan County Court in July 2013. She has been held in the Heilongjiang Province Women's Prison for over six years.

Ms. Fei was mistreated in the prison, and was twice hospitalized. She suffered from severe hypertension, heart disease, cerebral infarction, diabetes, high blood sugar, and her uterine fibroids was measured at 121 mm by 99 mm.

Her family found her completely changed when they visited her at the prison in February 2019 compared to how she looked one month earlier. She appeared sluggish, numb, and did not talk. She could not remember things, and did not know if she was full when eating. Her family suspected that the prison hospital had given Ms. Fei unknown drugs that destroyed the central nervous system.

Mr. Yu Zonghai's home was recently ransacked, and the electricity was turned off for no reason.

Ms. Ji Xiuzhi and Ms. Luo Zhenmei were arrested on the morning of April 4, 2019. Ms. Luo was released that afternoon. Ms. Ji was taken to the Laishui County Detention Center. The police jumped over the wall, entered her home, and ransacked it that afternoon. They confiscated photos of the founder of Falun Gong and Falun Dafa books.

Officers from the Quzhou County Police Department and Nanliyue Township personnel broke into Mr. Wu Pengyuan's home in Beimadian Village on the afternoon of April 6, 2019 pretending to repair water pipes. They confiscated Falun Dafa books and photos of the founder of Falun Gong. He is being held in the Nanliyue Township Police Station.

Ms. Lin Xiuzhu was arrested three months ago when she distributed information about Falun Gong. She was held in the Yantai City Detention Center. She was made to stand for three months as physical punishment. Her legs and feet are now very swollen. She does not even have the minimum daily necessities.

In addition, at the Yantai City Detention Center, a Falun Gong practitioner was persecuted to the point of mental collapse. She was held in a small dark room. Others could hear her crying at midnight. She was taken away, and her current whereabouts are unknown.

Five or six officers, from the Shuangshan No. 1 Police Station, the Mingshui No. 1 Police Station, and the Domestic Security Division in Zhangqiu District, knocked on Ms. Li Yuzhi's door claiming to read the electric meter on the morning of March 19, 2019. They were denied entry. They then called in someone from a lock company to break the lock. They forced their way in and arrested Ms. Li.

Ms. Li was taken to the Mingshui No. 1 Police Station, where she was interrogated. She was detained for 13 days, to be served outside detention center as she was over 70 years old. She returned home that afternoon.

Four people, including officers from the Shuangshan No. 1 Police Station went to Ms. Li's home again on the afternoon of March 20. They harassed her and videotaped her home.

Ms. Cai Ling was arrested and taken to the Shandong Women's Prison. Her whereabouts are unknown.

Ms. Wang Fanglan, retired teacher from the No.3 Bureau of Hydropower, was arrested when talking to people about Falun Gong on April 4, 2019. She is being held in the Jiangbei Detention Center, Hanbin District.

Ms. Xu Liuchun, 65, from Changhu Village, Bailian Town, was arrested around the evening of March 13, 2019. Her whereabouts are unknown.

Officers from the Yujiang Public Security System arrived in four police cars at Mr. Pan Shuicai's home in Huangxi Town and ransacked it on March 27, 2019. They arrested Mr. Pan and took him to the Yujiang County Detention Center.

Several days later, officers including Chen from the Yujiang County Domestic Security Division went to Mr. Pan's home again and ransacked it. In addition, they arrested Mr. Pan's sister, and she was held for one day.

Ms. Li Caizhi from Ningcheng County was held in the No. 2 Ward, Inner Mongolia No. 1 Women's Prison. Prison officials have denied her family visits since December 2018.

“Home Is a Good Cultivation Environment”