(Minghui.org) A notice on Minghui earlier this year said the U.S. government would tighten visa vetting of human rights perpetrators, including those involved in the persecution Falun Gong. These individuals could be denied a visa or barred from entry.

Falun Gong, also known as Falun Dafa, is a meditation system based on the principles of Truthfulness-Compassion-Forbearance. Since the Chinese Communist Party began to persecute the group in July 1999, a large number of practitioners have been detained, imprisoned, and tortured for their belief.

The notice urged Falun Dafa practitioners "all over the world to take immediate action to collect, compile, and submit to Minghui.org information on the perpetrators, their family members, and their assets, so as to locate and verify their identities.”

Cao Chengxu, former director of Longkou City 610 Office in Shandong Province, has been reported to Minghui for supervising the suppression of Falun Gong practitioners in the region. In particular, he oversaw, ordered, and directly participated in torturing them. Practitioners were beaten, deprived of sleep and/or food, forced to squat for long periods of time, shocked with electric batons, caged, and humiliated in public.

Cao was actively involved in the death of Ms. Tian Xiangcui in July 2000, the first reported death of a Falun Gong practitioner in Longkou caused by the persecution.

Cao Chengxu had been Party secretary of Fengyi Town (now part of Shiliang Town), Xiadingjia Town, and Longgang Neighborhood Committee. He participated in a mass arrest of Falun Gong practitioners on April 11, 2012. After becoming the director of Longkou 610 Office in 2013, he intensified the persecution across Longkou City.

Seventeen Falun Gong practitioners from Fengyi Town went to Beijing to appeal for Falun Gong in July 2000. They were sent back to Fengyi on July 12. Because Ms. Tian Xiangcui had played Falun Gong exercise music at Tiananmen Square, Beijing police considered her an organizer and forced her to reveal the full list of practitioners who went to Beijing with her. Cao Chengxu, then Fengyi Town Party secretary, paid Beijing police 5,000 yuan to obtain the roster so he'd know who in his jurisdiction had gone to Beijing.

Cao kept these practitioners in the Fengyi Township government compound, where they were left out in the direct sun and forced to stand for a long time with no food or water. Cao and his subordinates beat the practitioners every day, once in the morning and again in the afternoon. Very often, four or five people beat up on one practitioner at the same time. After several days, the practitioners were covered with bruises.

“Pay 12,000 yuan if you want to take a practitioner home,” Cao said to the practitioners' family members. Living in the countryside, no family could afford that amount, so all the practitioners were taken to Zhangjiagou Detention Center on July 17, 2000.

Ms. Tian, 61, was from Qujiagou Village. She was beaten savagely and also shocked with electric batons. As a result, she could not eat and often coughed.

On July 20, three days after ending up in the detention center, Ms. Tian fell into a coma and her family was notified to pick her up. Her family took her to a hospital on July 22 and she died the following day.

The death of Ms. Tian was not accidental. Cao and police officer Chen Zhenwei often resorted to abusing practitioners after they were drunk or lost money gambling. They shocked practitioners with electric batons for a long time repeatedly and the practitioners’ hands were visibly burnt. “It is okay if one or two of them [practitioners] die,” remarked Cao, “I will take care of that.”

Cao was appointed Party secretary in Xiadingjia Town in 2001. He set up a brainwashing session in the township government in February 2001 with the goal of “transforming” practitioners. In addition to torturing determined practitioners such as Ms. Sun Cuifang, Mr. Wang Wenqiang, and Mr. Yu Xiliu, Cao made videotapes to defame Falun Gong.

Mr. Wang, a disabled veteran, once stopped Cao from beating other practitioners. Cao sought revenge one night in March 2001. After getting drunk, he and other officers called Mr. Wang out, make him squat, and then took turns beating him.

Prior to the National People's Congress in March 2002, Ms. Zhang Fenglian went to Beijing to appeal for Falun Gong. Cao took her back and kept her in a metal cage with no food for seven days. The next day, he took Ms. Zhang to a brainwashing center set up by the 610 Office. One week later, Ms. Zhang was transferred to Zhangjiagou Detention Center, where she was held for a month before being sent to a different detention facility for another month. Cao did not release Ms. Zhang until her family paid him 18,000 yuan with borrowed money.

Mr. Diao Xihui, a former teacher at Fengyi Middle School, went to Beijing to appeal for Falun Gong shortly after the persecution started in July 1999. Cao, then Party secretary of Fengyi Town, and police officers beat him and his mother, who was in her 50s. Cao then took to Mr. Diao to a detention center and back to the township government after his detention term was up. Ms. Diao’s salary was also stopped for more than a year.

After the death of Ms. Tian Cuixiang was reported by Minghui.org, Cao and his people tried to find out who had submitted the information to Minghui. Since Ms. Diao and his wife Ms. Lu Yanna were both teachers, they became the main suspects. Ms. Lu was arrested in late 2000 and the police tortured her so badly that she passed out three times. She later escaped. In order to avoid arrests, she and her husband moved from place to place for more than three years. The police put the couple on a wanted list, posting a reward of 60,000 yuan.

When Mr. Diao went out to distribute Falun Gong materials on April 8, 2004, he was arrested in Qianshan County, Anhui Province, where he and Ms. Lu lived at the time. The couple and their 10-day-old infant were taken back to their hometown in Longkou City, Shandong Province.

Mr. Diao was later sentenced to six years in prison and Ms. Lu to three years. Pressured by the international community after this incident was widely reported, Ms. Lu was released on bail to take care of her infant.

However, officers from Xiadingjia Procuratorate and Xiadingjia police arrested Ms. Lu again on May 8, 2006, and held her in Longkou Detention Center.

After Cao became director of Longkou 610 Office, he intensified the persecution of Falun Gong in the region. Ms. Han Weimei, Mr. Yin Xiangyang, Ms. Wu Manping, and Ms. Li Yujun were all sentenced to prison for their belief.

On August 5, 2015, Cao issued an order to all township governments and Party Committees, ordering them to conduct an investigation of all local practitioners who had filed lawusits against former CCP leader Jiang Zemin for persecuting Falun Gong. A full list of these practitioners was provided to Longkou Police Department and government at all levels to aid in their investigation.

Longkou Domestic Security Division (part of Longkou Police Department) then forced local police stations, employers, and village Party Committees to arrest practitioners based on the list. Officers in Nanshan Police Station alone carried out two rounds of arrests in June 2015. Throughout Longkou City, over 40 Falun Gong practitioners were detained for filing criminal complaints against Jiang, with many more harassed. The arrested practitioners were tortured in detention. One form of torture dubbed “Roasting a Whole Lamb” is illustrated below: 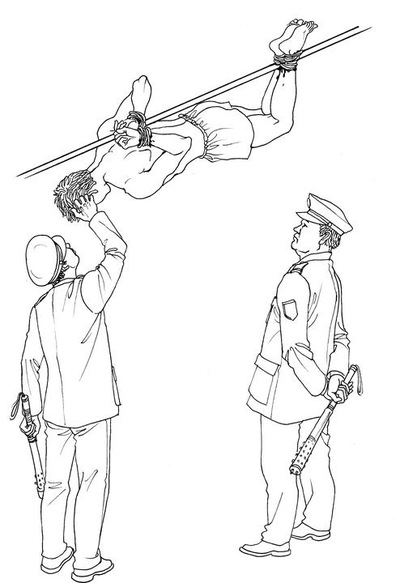 “Sending Righteous Thoughts with My Eyes Open While Illegally Detained”