(Minghui.org) Approximately 1,100 practitioners attended the Korea Falun Dafa Experience Sharing Conference held at the Jangchung Arena in Seoul on November 10, 2019. Thirteen practitioners spoke about how they applied Falun Dafa’s principles of Truthfulness-Compassion-Forbearance in their daily lives. They expressed gratitude to Mr. Li Hongzhi, the founder of Falun Dafa, for the positive changes they have experienced as a result. 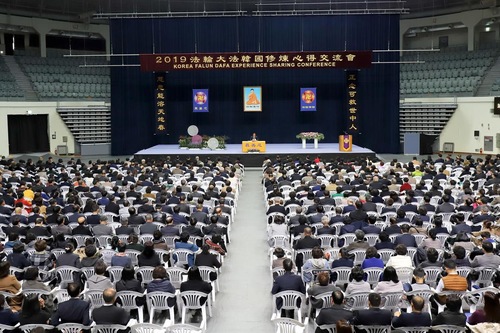 The Korea Falun Dafa Experience Conference was held in Seoul on November 10, 2019.

From Depression to Joy

Ms. Liu Nanshun from Seoul had always believed in spirituality before she found Falun Dafa. Reading scriptures and going to church, however, did not lead to enlightenment as she had hoped.

As a successful entrepreneur, Ms. Liu had a good life and a happy family. She later suffered huge financial losses because of her business partners' wrongdoings, falling into depression and fatigue.

When she first encountered Falun Dafa, she thought the practice was “miraculous.” As she continued to read Zhuan Falun, the main teachings, she was deeply impressed and said, “This is a true teaching that can guide people to high levels of cultivation practice.”

By following Dafa's principles, Ms. Liu became more tolerant and compassionate. “Many issues I worried about in the past no longer exist,” she said. “Calming down and improving my character helped me a lot. I'm now a positive person.” In her spare time, she shares information about Falun Dafa with others, hoping more people will benefit from the practice as she has. 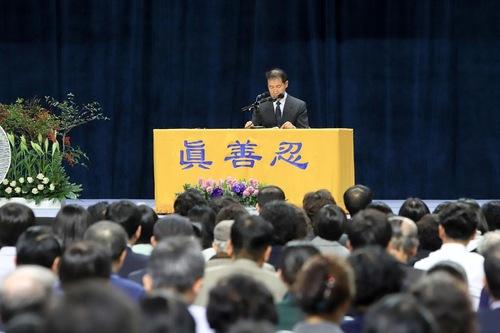 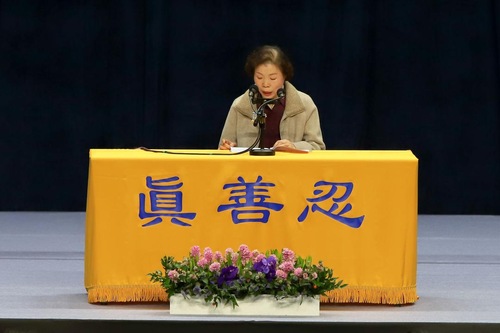 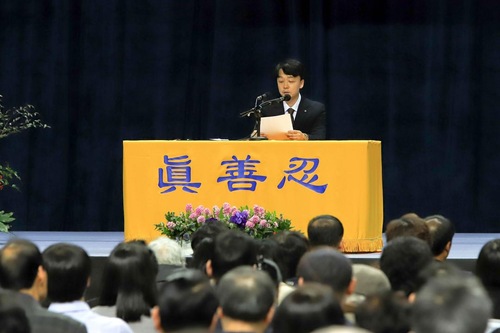 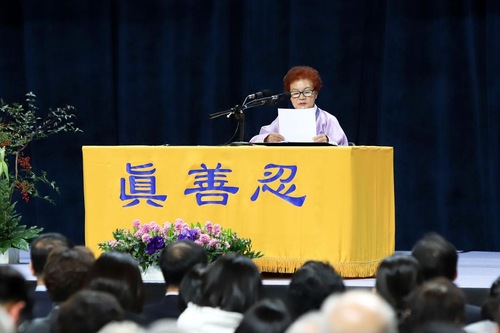 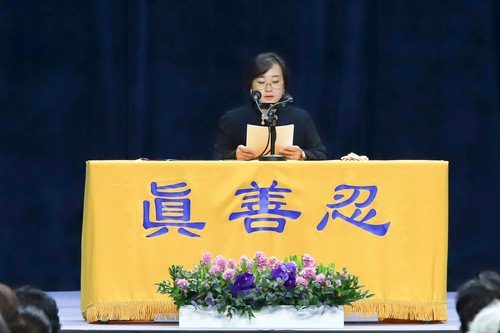 Thirteen practitioners presented their experiences during the conference.

Ms. Lee Meizi became a practitioner in 1995. By following the principles of Falun Dafa, she said she became a better person and her illnesses disappeared.

In 2008 she found a house cleaning job, but the owner did not provide any tools. Ms. Lee had to kneel on the floor and clean it with rags inch by inch. Her knees became painful and swollen. Despite her hard work, the home owner criticized Ms. Lee, pointing out areas that were not satisfactorily cleaned. “But I didn't feel bad about it,” Ms. Lee said. “I was paid to clean, and I had done my best.”

Three weeks passed, and she decided to quit. That day, the owner only asked her to wash the dishes and eat some fruits, not clean the house. Ms. Lee did not tell her she planned to quit.

The next time she went back, the family had purchased nice cleaning tools that made her work much easier. The owner said Ms. Lee’s predecessor always did a poor job, so she wanted to test Ms. Lee for a while. “You work very hard and did a great job,” the owner said. She also referred her to another family.

Every day, the owner invited Ms. Lee to have lunch before going to the other family in the afternoon. When Ms. Lee said it was not needed, the owner replied, “This is the only thing I can do to help you. Please accept it.” Ms. Lee continued to eat with the family each day. When she later resigned, the owner asked her to recommend another practitioner. “Falun Dafa practitioners are really outstanding,” she said.

Mr. Han Jihao from western Seoul used to chase after money, wine, and women. As a result, he constantly fought with others for personal gain.

The failure of his marriage and career left him in deep sorrow and depression. Hoping to find a way out, he began to read Zhuan Falun that a friend had given him. “I learned why my life was filled with misfortune. After I began behaving according to the principles [of Falun Dafa], my complaints and sadness vanished and I became happy,” he explained.

As he continued reading the teachings, Mr. Han decided to become a genuine practitioner. “Very often before I do something, I check to see if it's consistent with the principles of Truthfulness-Compassion-Forbearance,” he said. He was also able to bear the pain in his legs during the sitting meditation.

For many years, Mr. Han went to the gym. He later realized that building up his muscles was related to the attachment of showing off and lust. After he stopped working out and instead focused on doing the Falun Dafa exercises, his health improved and he no longer caught the flu or suffered from allergies.

Mr. Lee Kuixuan from Cheongju said it wasn't enough to just do the exercises. He was often sick since his childhood, but his health improved dramatically after he began to practice Falun Dafa. But for a long time, he did not pay attention to studying the teachings or following its principles. As a result, he experienced many tribulations. Failing to recognize these as opportunities to improve, Mr. Lee complained. He did not examine himself and had more troubles.

This was a lesson for him. “As soon as I realized what I did was wrong, I began to cultivate my xinxing (mind nature),” he said. After he started to live by Falun Dafa’s principles, the tribulations were soon resolved.

Remembering to be Considerate of Others

Ms. Zheng Xianzhen from Yeongju began practicing Dafa with her parents. Because her son had poor social skills and could not control his temper, Ms. Zheng received phone calls from his teacher almost every day. She blamed her son and argued with the teachers, leaving everyone stressed with little progress.

Later, Ms. Zheng realized she had not been cultivating her character diligently. She looked inward to examine herself and considered the issue from the teachers’ perspective. “The teachers do care about my son. That's why they want to help him. When it did not work, they contacted me so we could resolve it together,” she said. She called the teacher and apologized. The issue was soon resolved.

Mr. Kim Bingji began to practice in 2007. He said that sometimes when he did good deeds, his motives were not pure—he did things while seeking praise and recognition. He came to understand that compassion should be inherent for a Dafa practitioner. “Just like a flower's fragrance, it should be genuine and natural. When a practitioner is fully immersed in Dafa, everyone can easily see his compassion,” he said.

Once when he applied for a permit for an event, Mr. Jin argued with a government officer. He thought about it for a long time but still felt he was correct. After he identified his attachment, however, he called the officer and said he was wrong. The officer smiled and became more supportive later on.

Implementing the Principles at Work

Ms. Piao Xiangchun from western Seoul began to practice Falun Dafa as a child. She works as a translator at a patent firm. She constantly reminds herself that she's a practitioner and follows the principles of Truthfulness-Compassion-Forbearance. Both her coworkers and supervisors respect her.

One coworker did not get along well with the supervisors and was criticized almost every day. After Ms. Piao explained Falun Dafa's principles, the coworker agreed with them and tried to follow them every day. This greatly improved their work environment. Influenced by Ms. Piao, other coworkers also became more responsible and dedicated at work, and now their entire team cooperates well.

“Falun Dafa taught me profound principles and helped me understand things in a positive way,” Ms. Piao said. “Being altruistic improved my productivity.”

Raising Awareness of the Persecution at Tourist Destinations

Ms. Kim Chunzi from Bucheon began to practice Falun Dafa in 1998. All her illnesses soon disappeared. In 2010 she began going to the Port of Incheon to talk to Chinese tourists about Falun Dafa and its persecution by the Chinese Communist Party (CCP).

Ms. Kim and other practitioners go there rain or shine. One day, a ship was delayed from 3:30 p.m. to 9:30 p.m. Although it was already very late, the practitioners did not leave until they finished talking with the passengers at 1:00 a.m. “We cannot miss these thousand Chinese tourists,” one practitioner said. By the time Ms. Kim returned home, it was 2:30 a.m.

Ms. Kim said the attitude of Chinese people has changed a lot. “In the past, they were very hostile due to hate propaganda from the CCP, and they even discarded our materials,” she said. “Now they are [pleasantly] surprised to see practitioners here and even give us a thumbs up.”

Local practitioners worked together to put up banners covering over 300 meters along the Port of Incheon. “Every October we see Udumbara flowers blossoming in this area. I think Master Li (the founder of Falun Dafa) is encouraging us,” she said.