Hong Kong: Opposing Mob Attacks and Calling for the End of Communism

(Minghui.org) Practitioners in Hong Kong gathered on October 1 to condemn the recent mob attack of a Falun Gong practitioner in Hong Kong. They demanded a stop to the human rights violations perpetrated by the Chinese Communist Party (CCP) and an end to its 20-year persecution of Falun Gong.

At Maple Street Playground in Kowloon, practitioners demonstrated the Falun Gong exercises and held a rally. Several government officials spoke at the event, urging the CCP to stop its brutalities as well as to congratulate the 342 million Chinese citizens who have quit the CCP. 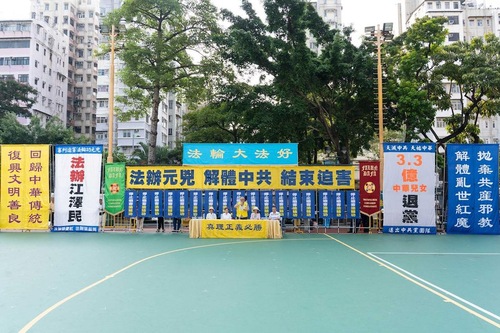 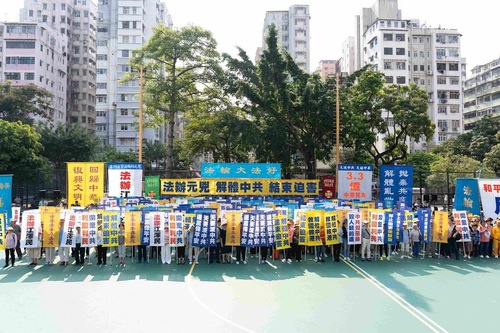 Rally by Falun Gong practitioners in Hong Kong on October 1, 2019 to oppose the persecution of their faith by the Chinese Communist Party (CCP). 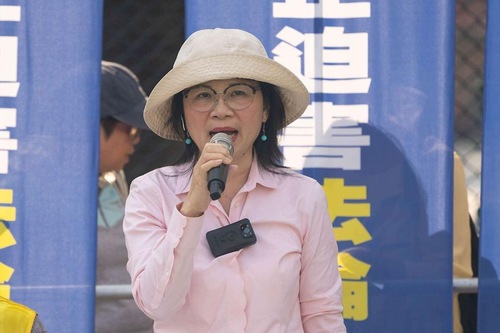 Ms. Liao, the victim of a recent mob attack, spoke at the rally

Prior to October 1, China’s National Day, the CCP had intensified its suppression of people in Hong Kong, resulting in many accounts of physical abuses. One of them involved Falun Gong practitioner Ms. Liao, who was attacked by two CCP mobsters on September 24. At that time, she and two other practitioners had just finished a meeting in a police station. The attackers hit her numerous times with batons, causing severe bleeding, and the case was reported to the police immediately.

Kan Hung-chueng, spokesperson for the Hong Kong Falun Dafa Association, said that the recent clashes between Hong Kong residents and the CCP regime show the CCP’s propensity to resort to violence. He said, “It tells us that the CCP has not only caused the biggest human rights disaster this century but also extended this to Hong Kong.” With more understanding and support from the international community, he hopes that the perpetrators will be brought to justice and that communism will come to an end.

He continued, “At this critical moment of history, anyone who chooses to support the righteous and says no to the vicious will be blessed. By preserving traditional values and acting upon our conscience, we will walk toward a brighter future.”

Yi Rong, director of the Global Service Center for Quitting the CCP (Tuidang), said over the phone that more and more Chinese people have decided to separate themselves from the CCP. In mainland China, there are many signs saying “CCP is not allowed by heaven, quit the CCP for a better future,” while Hong Kong had signs bearing the message, “Say no to communism.” Yi said this shows that Chinese society and people have begun to abandon the CCP. 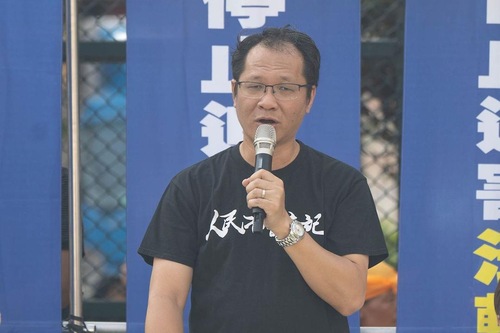 Richard Tsoi, vice-chairperson of the Hong Kong Alliance in Support of Patriotic Democratic Movements of China

Richard Tsoi, vice-chairperson for Hong Kong Alliance in Support of Patriotic Democratic Movements of China, praised Falun Gong practitioners for their rally. He emphasized the importance of condemning the CCP’s brutality and opposing it with justice, peace, and rationality. He highlighted practitioners’ courage and perseverance amid the 20-year-long persecution and called on “more voices to support the righteous.” 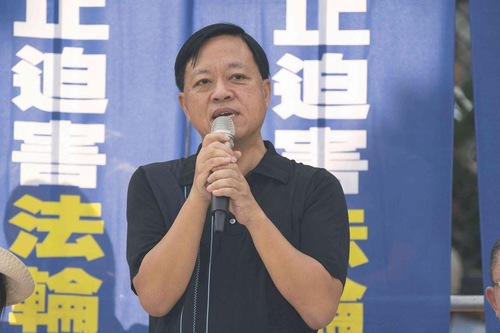 Lam Wing-yin, a former district councilor, said recent marches and rallies in many countries to support Hong Kong indicates the CCP’s loss of supporters. “Falun Gong practitioners and their principles of Truthfulness-Compassion-Forbearance have brought us hope—that is the most powerful in dealing with the CCP,” he remarked.

Wang Zhiyuan, spokesperson for the World Organization to Investigate the Persecution of Falun Gong (WOIPFG), encouraged more people to join the efforts toward a new era without communism.

A number of elected officials gave speeches over the phone. They included members of the Hong Kong Legislative Council (Wu Chi-wai, Lam Cheuk-ting, Leung Yiu-chung, Eddie Chu, Au Nok-hin) and the Taiwan Legislative Yuan (Wang Ting-yu, Lee Chun-yi). Wu said communism only results in calamity, and he called on everyone to say no to the Chinese regime.

As the largest totalitarian regime in the world, the CCP has suppressed freedom of speech and assembly, basic human rights, and religious freedom, said Lam. “The rule of the CCP is despicable for people who embrace democracy and freedom. Therefore, I admire anyone who renounces the CCP,” he remarked.

Leung agreed and said the more people separate themselves from the CCP, the more the regime will be isolated, which will lead to its destruction in the end.

Eddie Chu added that the brutality would worsen unless people join to curb it. For example, the CCP has extended its terror to both Hong Kong and Taiwan and attempted to infiltrate other regions as well. He hopes the international society will understand these issues and sanction the Chinese regime.

As a member of the Taiwan Legislative Yuan, Wang praised Falun Gong practitioners for their consistent efforts. “What you represent is enormous courage when facing tyrannical suppression,” he said, “As more people reject the CCP, one day we will witness that the wall we have fought against is collapsing—the whole world will see this and appreciate your efforts. So please keep it up.”

By persecuting Falun Gong and other Chinese citizens, the CCP is destined to fall, explained Taiwan Legislative Councilor Lee. “The biggest risk for the CCP is not the challenges it faces politically; rather, it develops from its violation of basic human rights. If the regime continues to brutally suppress people, it will be abandoned and become history,” he said.

“Improving in Cultivation While Clarifying the Facts”