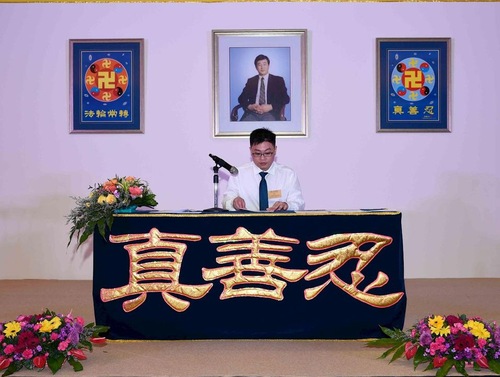 A practitioner talks about his cultivation experiences.

Learning Compassion and Tolerance While Running a Media

Five years ago, businessman Mr. Zheng became the sales manager for the Epoch Times in Singapore.

He said, “For financial reasons, the Chinese language version of The Epoch Times in Singapore stopped being published.” Mr. Zheng and his wife knew how important the newspaper was in helping people learn about the Chinese Communist Party's (CCP) persecution, so they decided to start it up again and manage it.

After successfully running his own business for decades, Mr. Zheng felt he could apply his knowledge and experience to guide the media team.

He said, “For many years, my employees worked according to my requirements. Because I paid their salaries and made all the decisions, they had to follow my orders.”

However, he discovered it was difficult to manage fellow practitioners because everyone had their own opinion. He said, “Every issue, even a sentence in an advertisement or a design image, required hours, days, or sometimes weeks of discussion before we could make a final decision.

“Several times, I argued and even had heated quarrels with those whose opinions differed from mine. Many times, I would pound the table during a meeting and then walk out.” He became discouraged.

He said, “Master asked us to study the Fa and look within. As I read the teachings and examined myself, I noticed my attachment to showing off and insisting that others accept my opinion. I also had a combative mentality but protected myself.”

In explaining his realization, he said, “We are all practitioners. Although we argued, the other practitioners were trying to discuss the issues with me from the viewpoint of the Fa. By studying the teachings and looking within, everyone was changing.

“The way I ran my business made my company successful. But for us practitioners, being humble and cooperative are the keys to success. I finally realized that we needed to follow the guiding principles of Truthfulness-Compassion-Forbearance to judge whether something was right or wrong.

“When I stopped insisting on my own opinions and decisions, I found that the others were able to calmly discuss issues with me. We talked things over and listened to everyone's opinion. Many problems were solved, and the results were often good.”

Others' Behavior Mirrors Our Shortcomings

Ms. Xue began practicing Falun Dafa five years ago and talked about a recent insight. She said, “One day I noticed a lady criticizing her son. She sounded reasonable but her words were harsh. I felt very uncomfortable.

“I know that there's a reason for everything we see, so I wondered why I saw this. I suddenly understood that this was showing me that, if I don't think something is right, I shouldn't be too quick to form an opinion.”

When she examined her own behavior, she noticed that she usually did not listen when someone held a different view. Then she remembered her frustration after she spoke with a Chinese person who refused to listen when she tried to tell him how Falun Dafa is being persecuted.

Those who attended the conference said they were touched after listening to the other practitioners' cultivation experiences. Many said they were inspired to improve and become even more diligent.

Mr. Deng said, “Listening to the others talk about their cultivation experiences pointed out my shortcomings. I will practice more diligently. Each sharing, whether it was from a new or veteran practitioner, seemed to point out where I need to be more diligent. It has motivated me to do better at studying the Fa, sending forth righteous thoughts, and talking to people about the persecution.”

Practitioner Zhang said, “Cultivation is a serious matter. No one can just coast along. We're all walking our own paths and we have no role models. All of our attachments will be exposed, and we must make fundamental improvements.”