Located north of Brazil, French Guiana is the second-largest region of France and the only territory in the mainland Americas that is part of a European country. More than 90% of the land area is covered by dense tropical forests.

From the capital city of Cayenne, practitioners traveled west to Saint Laurent du Maroni and Mana, going south to Grand Santi, Maripasoula, and New Wacapou. They met officers from city and town governments, introduced Falun Dafa to them and hosted numerous events to teach the exercises.

When the practitioners arrived in Cayenne, they met with the director of the mayor's office and the mayor's assistant in charge of culture. After hearing about Falun Dafa, the office director was supportive and hoped that a group practice site could be established in the city. He often travels to Guadeloupe and said that he would like to meet practitioners there during his next trip. 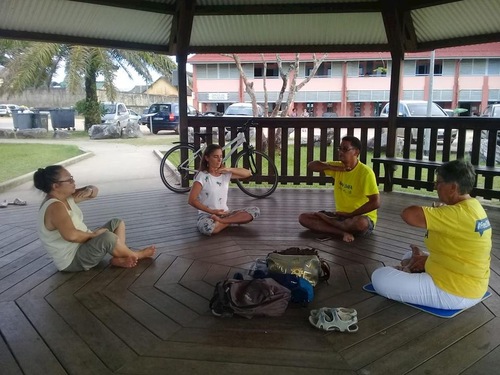 After leaving Cayenne on August 6, practitioners drove to Saint Laurent du Maroni, the second most populous city of French Guiana. In a meeting with the mayor's office director, practitioners told him about the benefits of Falun Dafa, and that it is practiced in over 100 countries. They also spoke about the persecution of Falun Dafa in China. The director said that he would give the materials to the mayor, Léon Bertrand. He welcomed the ancient practice to this city and said that he would help with group exercise locations.

An announcement of the free exercise teaching was also posted by the mayor's tourism office on their Facebook page. The following day, many tourists from other parts of France came to learn the exercises. They obtained information on group exercise sites near their homes so they could continue the practice. Tourists from Haiti and Suriname, a country next to French Guiana, left their contact information in order to receive updates on nearby group practice sites.

Practitioners performed an exercise demonstration for staff members of the Mana City government the following day. The staff members were excited to hear about this self-improvement spiritual practice and a video of the event was posted on the city government's web page. An officer said he also knew a senator who represents French Guiana and would pass the materials on to him. 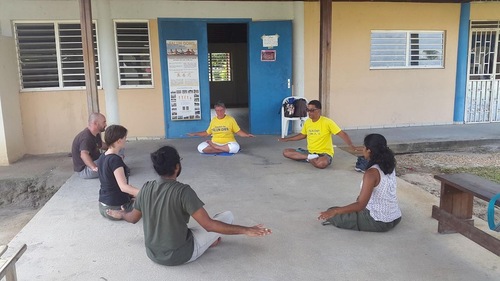 After eight hours of canoeing on the Maroni River, practitioners arrived at the town of Grand Santi. The mayor's office director, also in charge of culture, met with the practitioners, who introduced Falun Dafa to staff members and tourists in the multi-purpose hall. 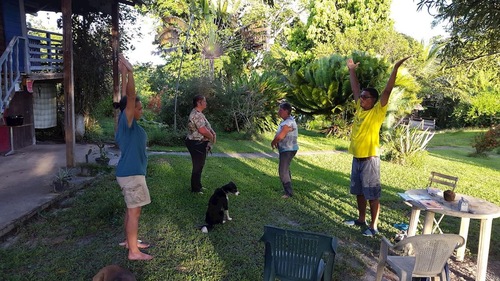 Teaching the exercises to neighbors while staying at a hotel in Maripasoula.

After a 5-hour canoe trip, practitioners arrived in Maripasoula and talked about the meditation practice with local residents. A woman named Hilda was very happy to see the practitioners and learned all five sets of exercises. Moved by the energy and relaxation, she was in tears. She said she had read about Falun Dafa in the Epoch Times newspaper when she was in Paris, and added that she hoped the persecution in China would end soon.

It took only 20 minutes to travel by canoe from Maripasoula to the last destination, the small community of New Wacapou. The practitioners introduced Falun Dafa to the people there. One young Indian American who was canoeing learned the exercises from a practitioner. The young man said that Falun Dafa is from the divine and he planned to find out more about it on the Internet.

“Overcoming Tribulations at a Truth-clarification Event in Germany”