I am a Polish-born Australian practitioner. When I was 17 years old and still living in Poland, I was inspired to paint a picture of God turning the world for an art competition. I worked hard all night to finish it, even though I knew that my art teacher was a communist and an atheist and would most likely reject the painting. He laughed and confiscated it.

In 2003, I became a Falun Dafa practitioner.

In the poem “Re-Creating With Immense Grace” Master says:

About 35 years after finishing Art School, I returned to Poland for my school reunion and spoke about a horrific accident which I had before I started practicing Falun Dafa and the healing miracles I experienced after reading Zhuan Falun. I talked about the persecution, taught my classmates the Falun Dafa exercises, gave them brochures, and collected signatures on a petition calling for an end to the persecution. My old art teacher signed my petition as did my school principal. With a shaking hand, he printed his name. My history teacher started crying and apologized for all the lies she told us about communism. She also signed the petition.

I had not been interested in painting pictures for many years. The deranged art of the modern world was pervasive, and I didn’t want to be part of it. However, one day in 2007 I read Compassion Magazine and was deeply moved by Chen Aizhong's story. I knew that it was not a coincidence and that everything is carefully arranged for us, even the most intricate details.

I read that Chen was hanged on a cross and died at the age of 33, just like Jesus, because he refused to renounce his faith in Falun Dafa. Six members of Chen’s family were also brutally tortured to death. I wanted to tell everyone about it in a way that would touch people’s hearts. I studied Master’s “Teaching the Fa at the Discussion on Creating Fine Art” in Teaching the Fa at the Discussion on Writing Music and Creating Fine Art from 2003 to better understand how we should create beautiful art. It helped me a lot. 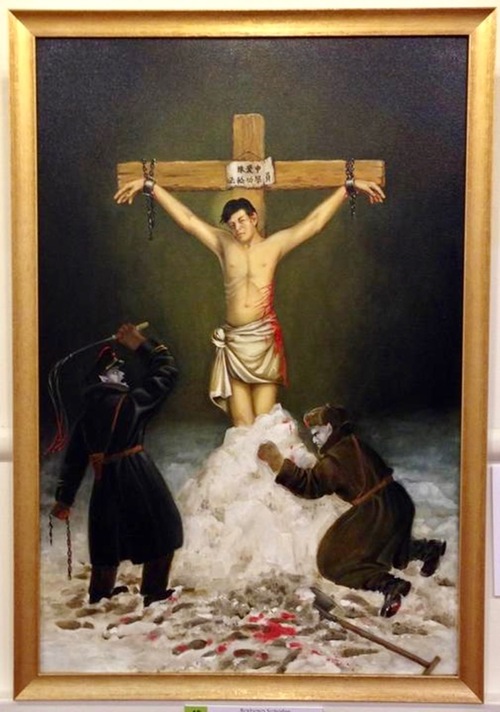 “Beyond Forbearance – The Torture of Chen Aizhong, Falun Gong Practitioner”

Painting a crucifixion in the snow was challenging. I had to capture the depravity of his oppressors and recreate the scene on canvas. As one of his tormentors is piling snow on Chen's feet and legs, he is on his knees in front of the practitioner. The hardest part was to paint Chen’s face. I did not know how to portray his face in pain. I looked inside and remembered my own suffering. My life has been saved many times and I know that sometimes when you let go of everything, including life and death, there is no more pain. I titled the picture “Beyond Forbearance – The Torture of Chen Aizhong, Falun Gong Practitioner.”

When I was learning how to write his name on the cross in Chinese, a practitioner informed me that his name means a person who loves and is loyal to his country and that the character for “loving heart” was removed from the Chinese alphabet by the Chinese Communist Party (CCP). I was amazed to learn that.

My painting was not accepted for the Dafa Art Competition, but that didn’t bother me much. I hung it up on the wall at home and stopped painting. I was attached to time. Not knowing how much time is left, I worked on other projects in Australia and abroad. Thinking about my painting, I knew that people were not ready yet for such a confrontational comparison.

Five years later my girlfriend from the Polish Art Society asked me if I had any paintings for an exhibition. I only had the one, so I asked her what the topic of the exhibition was. “Taboo” she replied. I thanked Master for the arrangement and accepted the challenge. I knew that, with righteous thoughts and a caring heart, I can restrain the evil interference.

The majority of Polish people are devoted Catholics, and it would be a good test for me. Only by staying in the Fa, not acknowledging the evil, seeing the good side of people, and wanting to help them to be saved would there be a positive outcome.

Master said in “Teaching the Fa at the Conference in Houston in 1996”: “Only when one goes along with the will of heaven will success come naturally.”

My painting was accepted even though it was not for sale. It was an important exhibition in a prominent art gallery in the Melbourne central business district. At first, I was a little apprehensive about the placement of the painting, but I quickly rejected that human thought. I trusted Master's arrangement and was rewarded—the painting was placed in the center behind the speakers. There were people from the art community as well as many Polish people and government officials. All the photos and videos of the speakers had my painting in the background.

Some people were moved to tears; there were also very surprised Chinese students who read the description. Thanks to practitioners in the media at this event, Chen Aizhong's story and my quick recovery were published on the Minghui website. It was also published on the web and in print in the Epoch Times in Hong Kong. That made it possible for many Chinese to find out the truth about the brutal torture and murder of this beautiful family of Falun Gong practitioners by their evil regime. Some people put it on their social media. I thank Master for this arrangement.

In one line of his poem “To Choose” in 2012, Master says: “Are Dafa disciples any different from the Christ?”

In 2017, I was at a crossroads, not knowing what to do next, wondering if I were fulfilling my vows. I had a very vivid dream one night. I was about to descend to earth when a deep voice asked me what I wanted to be. At that moment I remembered about suffering a lot as an artist in one of my previous lives, but I still replied “artist” and woke up.

I always thought that not caring for fame or gain was very important, so I neglected the gift I was endowed with that enabled me to be an artist. I was full of regret. Master's compassion is immense. Pictures that I wanted to paint but never got around to started appearing in my mind.

To show the beauty of Dafa and Dafa disciples I started by painting a practitioner in meditation. I had to choose someone whom I knew was diligent and had a very good heart, as it would be reflected in my work. Another practitioner told me that he'd had a celestial eye vision, in which he'd seen people that a practitioner was helping to save floating above her head. That was an interesting idea. I always wanted to express the saving grace that we come here with. 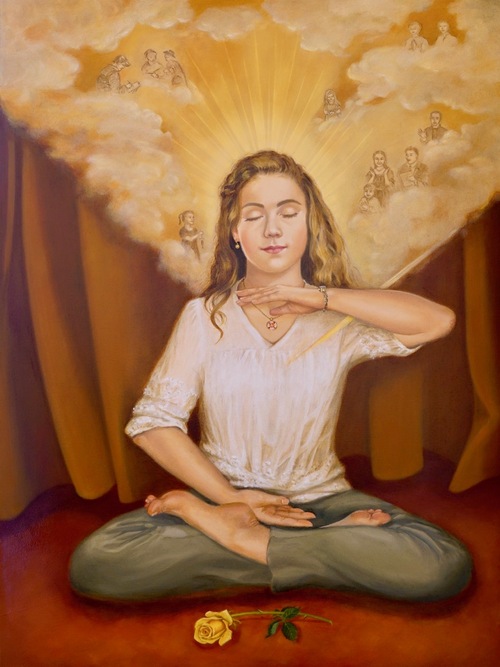 As I was wondering how to show the practitioner's compassionate heart, a beam of light appeared from her heart. It was amazing. It was a cloudy day and my windows were on the opposite side of my easel. I took a photo of it and thanked Master for his help. I painted the practitioner in front of curtains to remind us that we are on stage, being watched at all times, not only by Master and the people around us but also by the countless beings in other dimensions, good ones that may help us, as well as evil ones that are waiting for us to make mistakes.

Part of Master's 2010 poem “Stirred by Reflection” came to mind:

“...Disciples of Fa walk the earth,Compassion they bring.With kind thoughts they save people,...”

The people that she is helping to save are in her energy field. The watch on her wrist is a reminder of the precious time that is passing. I gave her a yellow rose because it is known as a symbol of hope, resilience, wisdom, and power. I finished the painting just before May 13, so it was published on the Minghui website for Falun Dafa Day. It was called “Compassionate Heart.” 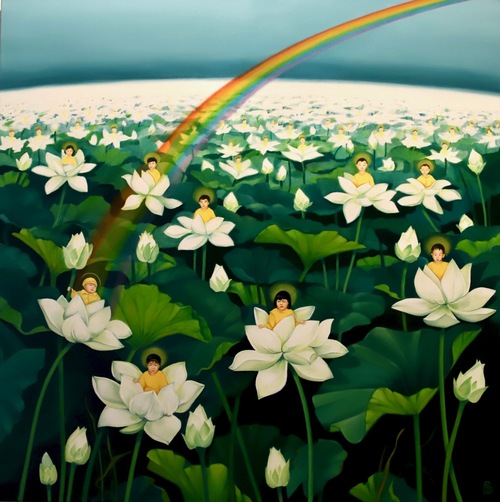 The Sea of Suffering

My next painting, “The Sea of Suffering,” was done in honor of the silent suffering of Falun Gong children that have been persecuted to death or who have suffered as a result of the persecution. Some became orphans or lost family members they loved. It shows children sitting on white lotuses reaching as far as the horizon. A rainbow takes some of them to heaven. I finished the painting just before July 20, ready for the 19th anniversary of the beginning of the persecution of Falun Gong. The day the painting was finished, I walked outside and saw a beautiful rainbow in the sky.

Painting is part of my cultivation. I have to put my heart into it, always improving my forbearance, xinxing, and skills. While I paint, I constantly search for the true colors, true expression, and best composition. I hope that if through my paintings, some people can understand Falun Dafa better and be saved, my work is not in vain.

Like many other practitioners, I have also enlightened that the success of our work depends on our cultivation. We came to this world with a huge responsibility to help Master save all beings. Master is with us, encouraging us and helping us. We were given the Fa to guide us in our cultivation and we were given the very powerful ability of Righteous Thoughts and it is up to us to use it.

The meaning of this Fa is really profound. This is just how I understand it now from where I am in my cultivation.