Several elderly practitioners have documented the ordeals they were subjected to in this prison.

I am 69 years old. I was incarcerated in Chongqing Women's Prison in September 2015. Guard Tang Anzhi planned to “transform” me in a month. She cursed, hit, and slapped me, and she also ordered four criminal inmates to torture me, too.

I tried to reason with her, pointing out that she was highly educated, so why would she verbally abuse and beat me?

She said, “This is a prison. It is my territory. You have no freedom or rights here. I'll hit you until you 'transform.'”

She added, “So I hit you and cursed you. What can you do about it? Sue me? I am not afraid. Nobody talks to me like you did.” Then she beat me again.

She threatened to move my two sons into an apartment near the prison and force them to nag me every day until I was “transformed.”

I was bruised all over from electric shocks because I refused to copy the derogatory “three statements.” However, under the unbearable pressure, I gave in eventually, against my will. 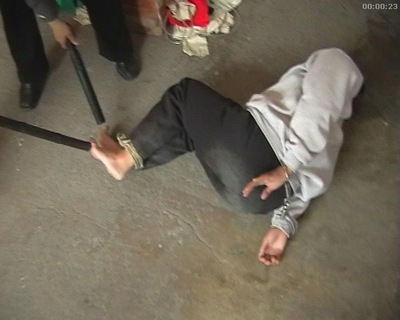 One afternoon, Tang Anzhi took me to a classroom and forced me to squat until past midnight. She also slapped me and would not let me eat at mealtime. She said I couldn't leave the room until I had written a “thought report” she was satisfied with. After more than eight hours, I was exhausted and hungry. I could not stand the hot summer heat and passed out.

On another occasion, criminal inmates and guards pried open my mouth and force-fed me some unknown medicine. Several of my teeth were knocked out during the ordeal.

That day, I was stripped naked, beaten, and kicked in the restroom by several criminal inmates. They then locked me in the basement.

They tried to transform me with torture. When I refused to be “transformed,” Tang Anzhi and criminal inmates abused me every day.

The inmates forced me to stand still for long hours every day. They also hit me relentlessly. They did not let me sleep or talk. They doused me with cold water and gagged me with a dirty towel used to clean the restroom floor.

One day, they kicked my back so hard that I fell down. They then took photos and accused me of being "uncooperative." Tang Anzhi then ordered the inmates to drag me out to be “taught a lesson” on the exercise field.

On another occasion, I was taken to a storage room and severely beaten. I passed out.

Sadly, I gave in and was “transformed” against my will because of the unbearable torture. But deep in my heart, I never gave up my belief in Dafa and the principles of Truthfulness-Compassion-Forbearance.

I am 69 years old. I was brutally tortured on the second floor of a building in Ward One and passed out several times. Once, after I fainted, two criminal inmates pulled me down to the first floor, claiming that I was faking. They then kicked and beat me to wake me up.

One inmate threatened, “If you fake like that again, Tang Anzhi instructed us to put you out in the sun on the exercise field. When you die, we can just wrap you up in a mat.”

Tang Anzhi and other guards took turns interrogating me every day. The criminal inmates ordered me to write a report defaming Master Li Hongzhi (the founder of Falun Gong) and Dafa. Instead, I wrote “Falun Dafa is good; Truthfulness-Compassion-Forbearance is good.” Then they made me stand up and write reports all night long.

To try to “transform” me, the inmates forced me to watch videos that slandered Dafa. They also ordered me to curse Master and Dafa. They wanted me to copy the so-called “three statements.” When I refused, they did not let me sleep, use the restroom, brush my teeth, or use a spoon to eat. They stuffed my mouth with a dirty towel.

I was also beaten and slapped every day. I was forced to crouch and sit on a small bench for long hours. Eventually I became deaf in my left ear, could not see clearly, and had trouble sitting and walking.

I am 64 years old. I was illegally sentenced to prison twice, for a total of ten years. I was sentenced to three years on July 15, 2015, following my second arrest and taken to Chongqing Women's Prison on January 21, 2016.

A criminal inmate threatened that they were relentless when it came to Falun Gong practitioners and would torture me in all kinds of ways. Another inmate claimed that she had a new torture technique.

I had to hold a bucket full of water, but the bucket was not allowed to touch my body for support. If any water spilled out, they mopped the floor with my clean clothes.

I was often forced to carry two half-full buckets of water inside from 7 a.m. to 5:30 a.m. the next morning. If the buckets touched the floor, they would fill the buckets up to the rim. I was allowed to sleep for only 20 minutes and then had to start all over again.

I fell asleep on my feet. My legs swelled as big as an elephant's.

The criminal inmates made me stand up and sit down on a small bench 1,600 times in a row. If I stopped, they made me start over from the beginning. Then I had to squat, stand at attention, and hold the bucket of water. I was exhausted and sweating by the end of the torture but was not allowed take a shower. They also beat me, slapped me, and poked me in the head with a pen.

I was forced to read evil books against Dafa and watch slanderous videotapes every day. I had to stand up and write reports that were then edited by the criminal inmates, after which I had to copy the edited versions. When I fell asleep, they splashed water on my face or irritated my eyes with a noxious lotion. I was allowed to use the restroom and sleep only after I finished copying the edited reports to their satisfaction. I was covered in bruises.

I was not allowed to shower on hot summer days. Even worse, I was forced to cover myself with a 9-pound cotton quilt.

I was doused with cold water in March and not allowed to change out of my wet clothes. I also had to wear wet shoes, and my feet blistered and festered.

When I asked for a small steamed bread roll for breakfast, the criminal inmates gave me two big ones and forced me to eat them with no water. This kind of torture lasted for six months.

On one occasion, I was pushed down on the floor of the restroom and severely beaten for writing my truth-clarification experiences. My belly was swollen for more than two weeks after the beating.

On August 2, 2016, a criminal inmate pushed me against the restroom wall and I fell down, severely dislocating my left wrist. Today, two years after my release, the bump is still there.