(Minghui.org) It is estimated that among the over 40 million tourists who visit Paris each year, about one million come from mainland China. For the past 19 years, Falun Gong practitioners have maintained a presence at popular tourist sites, telling people about the benefits of Falun Gong, as well as clearing up misconceptions Chinese tourists often have based on the defamatory propaganda they were fed by China's state-run media.

With a height of over 1,000 feet and width of more than 400 feet, the renowned Eiffel Tower is best viewed from Champ de Mars on the east side and Place du Trocadéro (Human Rights Plaza) on the west side. Located along the Seine River, these places are the two most popular tourist sites. 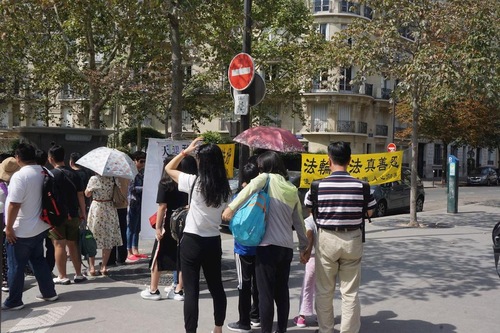 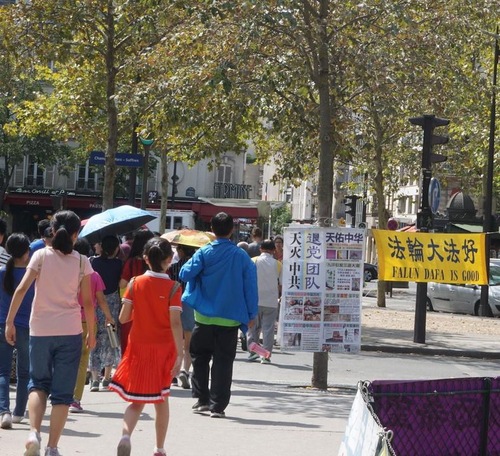 Chinese tourists view Falun Gong posters and banners while on tour in Paris.

Chinese tourists usually get off their bus at Champ de Mars, walk past the plaza for dining, and return to their bus to head to their next destination. Practitioners place a variety of posters and banners along the 700-foot passage.

One day a practitioner, Ms. Jun, approached a student tour group and told them about the severe persecution by the Communist Party in China. She encouraged them to consider withdrawing their memberships in the Communist Party. The teacher leading the group was nervous and tried to stop the practitioner, saying the students should not get involved in politics. Ms. Jun explained that when joining the Communist Party's youth organizations, these students vowed to devote their lives to the Party, and that quitting the regime is the best way for them to avoid getting involved in politics.

“I know that Falun Dafa is good,” one student suddenly shouted. “My grandma, uncle, and aunt are all practitioners, and they are good people.” The teacher heard this and went quiet. Ms. Jun continued talking with the group for a while before they left.

One retired official who used to work in Zhengzhou City, Henan Province, said she had renounced the Party more than ten years ago with the help of a practitioner. “Jiang Zemin is so bad—he destroyed the nation through bribery and corruption. I hope a brighter future will come soon,” she said. 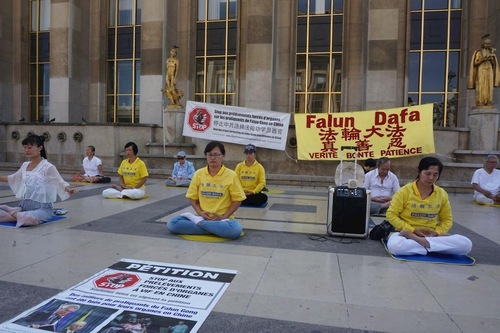 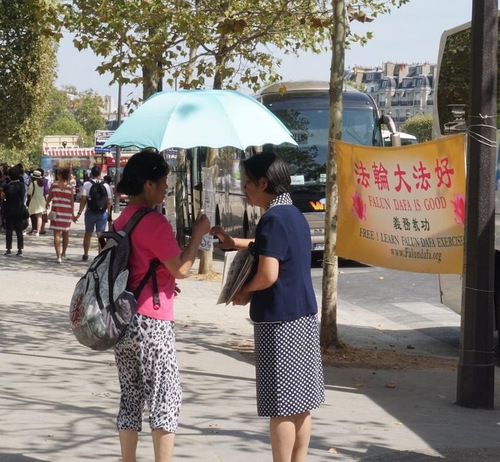 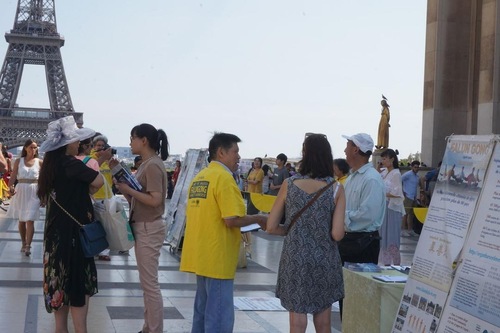 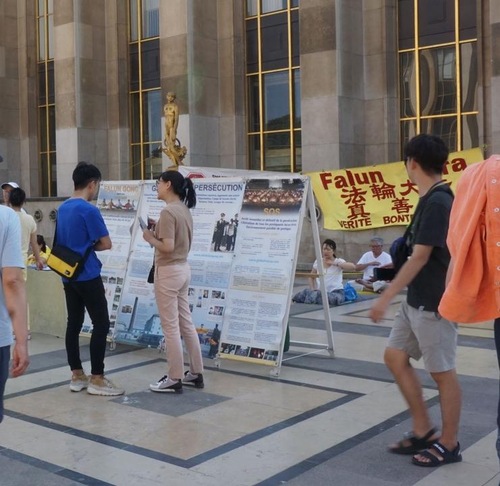 One biology teacher read the poster in detail and spoke with practitioner Ms. Xin. “I believe Falun Gong must be good, because there are so many people practicing it,” she commented. After Ms. Xin cleared up her confusion regarding slanderous propaganda, such as the staged Tiananmen Square self-immolation, she was thankful and decided to quit her memberships in the communist organizations.

A Chinese student studying in Germany read the posters and talked with a practitioner. “Everything I heard about this in the past was negative. What I learned here today is totally different,” he said. The student said he did not like the Party and had never become an official member either. After the practitioner explained to him the importance of severing all ties with the regime, he agreed to quit the Young Pioneers, a Party organization that he had been made to join in elementary school.

Two young men from the United States, Peter and Frederick, work at a financial firm and they both signed petitions calling for an end to the suppression in China. “Freedom of speech is very important for us and we have to stand with it,” said Frederick. Peter agreed and thanked practitioners for the information. 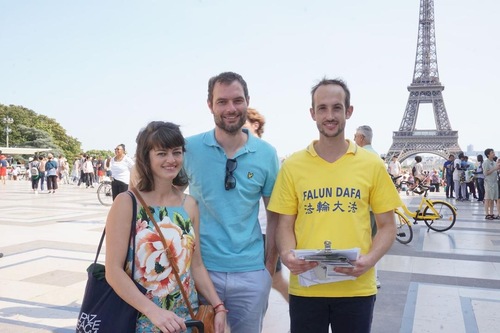 Piter and Caroline, husband and wife, are from France. Piter is a technical manager while Caroline works in marketing. “I am so happy to hear about this today. Now I know where to find practitioners to learn the exercises,” said Piter.

M'Chami Farid and Sada are business people from Marseille in southern France. They signed petitions calling for an end to the forced organ harvesting in China. “Activities like this are very informative and tell us a very important message. Thank you for being here,” said Sada.