(Minghui.org) “I love the history stories, from which I learn what promise means and why I need to cherish other people's work,” little Zhuo said after the three-day Minghui summer camp in Taipei. “I also like the Falun Gong documentaries. I learned about the persecution in China. I will tell my classmates about it.”

Minghui summer camps all over the world provide a stimulating environment for young Falun Gong practitioners to improve in their cultivation and learn traditional Chinese culture. This report covers two summer camps, held recently in Taipei, Taiwan, and Copenhagen, Denmark.

Learning about Traditional Culture and Cultivation through Classical Chinese Dance

The main theme of the Copenhagen summer camp this year was traditional Chinese dance, with supplemental activities including Chinese and English language skills, handicrafts and learning about the traditional Chinese concept of Yin and Yang. Nearly 20 young people from Denmark, Sweden, Norway, Finland, and Ireland between the ages of 8 and 19 enjoyed the two weeks of activities. 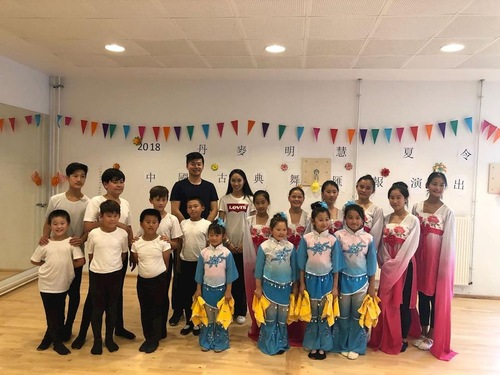 Participants in the Minghui Summer Camp in Denmark pose for a group photo after the recital dance performance at the end of the camp.

Ms. Jin, the organizer of the camp, said, “We hope that the young practitioners will improve in art, language, speech, and behavior through this camp. The most important goal of course is the improvement of their cultivation and morality.” 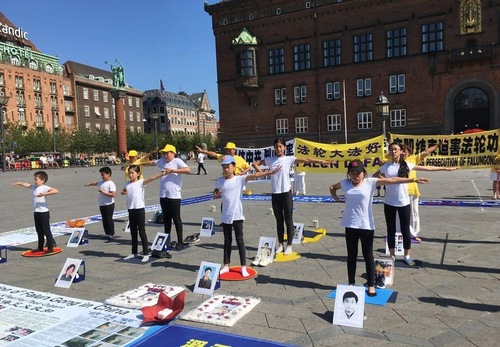 During the camp, the children visited the sights of Copenhagen. At City Hall Plaza they demonstrated the Falun Dafa exercises and talked to other tourists about the persecution of Falun Gong in China.

Alina came to the camp with her brother. She loved her experience over those two weeks.

“The traditional culture teaches us to respect teachers and be compassionate to others,” Alina said. “Many kids at my [regular] school do not value these things.”

Lily, the mother of one of the campers, was glad that her child learned to be humble and forgiving at the camp.

“The children did the exercises every morning, and during the day, the teachers kept reminding them to follow the principle of Truthfulness-Compassion-Forbearance,” Lily said.

She added, “I notice that my daughter has become more polite. Interestingly, her behavior is like a mirror that lets me see my own problems, such as jealousy and the mentality of fighting.”

“We have both improved here,” Lily said.

Cultivating Together in Taipei 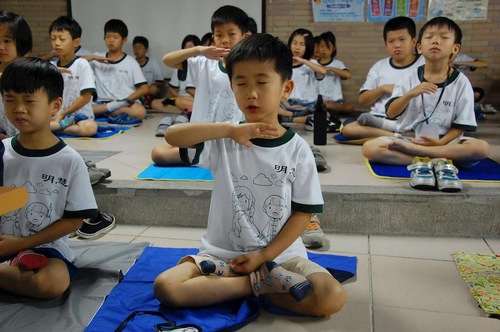 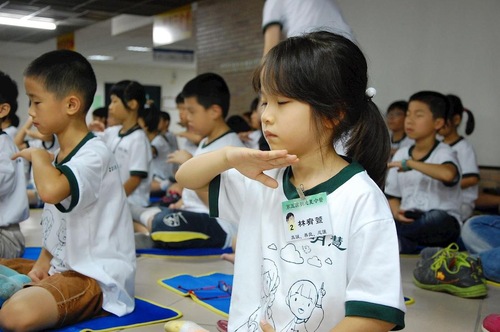 Young campers do the meditation exercise together. 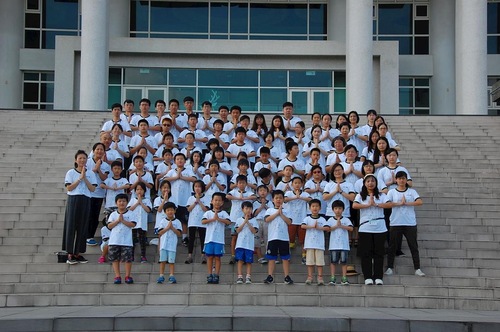 For many young practitioners, one of the most important things that they learned at the camp was to look inward for one's own faults during conflicts.

Camp organizer Yang Yizhen said, “Our goal is not only to let young children see the beauty of Falun Gong but also to teach them the principles of Truthfulness-Compassion-Forbearance. In this setting, they can remind each other to follow a higher moral standard.”

Chang Huairen, one of the instructors, was touched by the spirit of the kids.

“Most of the young kids tried their best to do the sitting meditation, although some of them do not fully understand why we do it,” he said. “A 5-year-old often asked me to hold him and playfully jumped on me. But when the [exercise] music started, he was able to sit there quietly for 15 minutes.”

Young Yizhen said, “Many people think young kids are naughty. But, in fact, they are pure. In this environment, you see that they are all able to measure their speech and behavior against Truthfulness-Compassion-Forbearance.”

“A Realistic Dream That Inspired Me to Improve”