(Minghui.org) Today's news from China includes incidents of persecution that took place in 10 cities or counties in 8 provinces. According to this report, 14 Falun Gong practitioners were subjected to mistreatment during their detention, and at least 1 was illegally arrested. 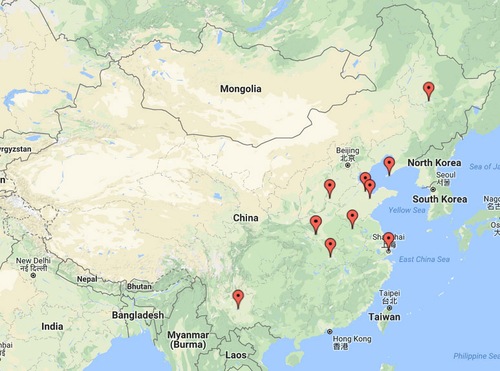 Ms. Zhou Qian was arrested by officers from the Pudong New District Domestic Security Division on January 10, 2018. She has been detained since then.

The Si County Police Department submitted Ms. Zhou Yanyu's case to the Procuratorate for the third time on June 19, 2018.

Mr. Wang Zhian, Mr. Guo Shusen, Ms. Xia Deyun, and Ms. Xia Dezhen were arrested by officers from the Binhai Police Department of the Shengli Oil Field on April 21, 2018, when they were seeing family members off at Dongying Railroad Station.

Ms. Xia Dezhen was released on July 4, 2018. Mr. Guo Shusen and Ms. Xia Dezhen's case files were sent to the Procuratorate. Mr. Guo is still being held in the Niuzhuang Detention Center.

Nearly 20 practitioners from Changyi City were arrested by Domestic Security Division officers on April 24, 2018. Many were released later that day.

However, Ms. Qi Naihua, Ms. Yang Xiaohua, and Ms. Xu Wanxiang are still being held in the Weifang Detention Center.

Ms. Wu Shiye, a retired instructor in Kunming City, was arrested by officers from the Xishan District Domestic Security Division and police station on May 9, 2018, for talking to people about the persecution of Falun Gong. Her home was ransacked.

Ms. Wu was taken to the Kunming No. 1 Detention Center, and her arrest has now been formally registered.

Ms. Zhang Shichao was arrested by Tushan Township Police Station officers on January 5, 2018. She was detained for ten days before being put under criminal detention.

Ms. Zhang is still being held in the Handan City No.3 Detention Center. She was tried in the Wuan City Court in early July, 2018.

Ms. Guo Jinyu, who is retired from the Nanyang City Chemical Fiber Factory, was arrested at her home by plainclothes officers on the morning of July 9, 2018. Her place was ransacked.

Ms. Wang Qihua was sentenced to eight years in prison in the Xinzhou District Court on May 2, 2018.

Mr. Yu Xishan from Qiyi Village, Qingling Township in the Shuangcheng District, was arrested at his home by officers from the local police station on June 1, 2018. He was taken to the Shuangcheng Detention Center.

“The Power of Dafa: Almost Blind, a Woman Steps on the Path of Health and Independence”