“The Art of Zhen, Shan, Ren” Visits the Bulgarian Cities of Plovdiv and Varna

(Minghui.org) The international exhibition “The Art of Zhen, Shan, Ren” (Truthfulness, Compassion, Forbearance) visited Plovdiv and Varna – the second and third largest cities in Bulgaria, on May 9 through June 15, 2018. The exhibition highlights the mind-body-spirit cultivation practice of Falun Gong (also called Falun Dafa) and exposes the severe persecution that Falun Gong practitioners face in China.

The city of Plovdiv hosted the exhibition on May 9-27 at the Municipal Council building, in cooperation with the Plovdiv Artists Association. Two municipal meetings were held there during that period of time, providing an opportunity for many officials, city commissioners, and district managers to see the artworks, and to learn about the human rights violations in China. The municipal council chairman shared that her colleagues were concerned by the scenes depicting the brutal violence that Falun Gong practitioners have experienced in China, causing most of them to ask for further information about the repression against Falun Gong. 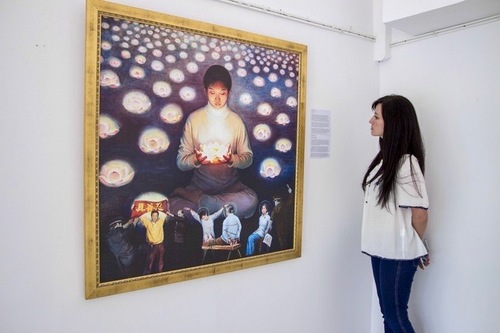 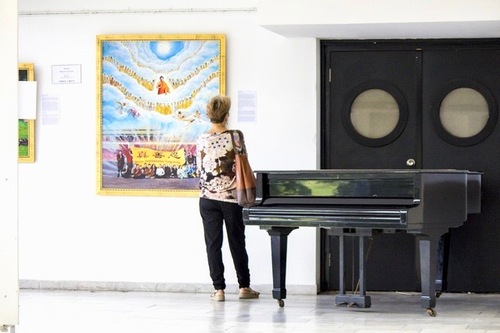 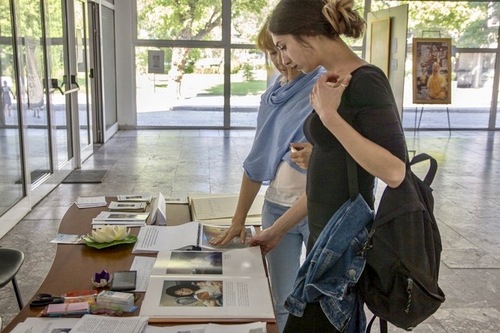 Plovdiv’s ombudsman advisor George Halachev was very impressed by the exhibition and showed a great deal of interest in the Falun Dafa spiritual practice. He wanted to learn the exercises and to read Zhuan Falun – Falun Dafa's main book, which contains the core philosophy of the cultivation system. He also expressed his admiration for the practitioners’ diligence and dedication in introducing Falun Gong and exposing the persecution in China. He thanked them for choosing the city of Plovdiv to do that, “I haven’t seen such an attendance in this gallery! This exhibition should be presented again during 'European Cultural Capital – Plovdiv 2019' forum,” he said.

Besides city officials, guests included many local citizens and tourists. There were students, mothers with children, and seniors, who stopped by after a walk in the beautiful Tzar Simeon’s Garden. Many returned a few days later with friends. A number of people admitted that their reason for coming back was to see the painting of the Buddha statue, greeting them with a heartfelt smile. As one person said, “We want to feel again the warmth, the light, and the kindness and compassion it exudes… it’s extraordinary.”

Many of the older visitors were impressed that the artworks in the exhibit were not abstract but realistic, depicting real-life personal stories. They spent quite some time discussing what the Falun Dafa practitioners in China are subjected to over the course of the persecution. Most of them compared what they had seen with the Bulgarian Communist Party’s repressions against them and their families. One person remarked, “Unfortunately we did not have such brave artists here to paint the suppression by the Bulgarian communists.”

Many guests were surprised to learn that such a genocide was happening today, and wondered why so little is heard about it. Some wanted to know more about the facts presented in the Bloody Harvest report by Canadian human rights activists David Matas and David Kilgour, which discusses the organ harvesting from prisoners of conscience in China. Visitors thanked the exhibition organizers for providing this important information.

Younger visitors were captivated by the art. On the first day of the exposition, a group of students from the National High School for Stage and Screen Arts and the Tsanko Lavrenov Art School attended. The art school's director, Svetlozar Chavdarov, an artist who has visited China, was impressed by the high artistic level of the works. The students also shared how much they liked the paintings. “Nowadays such precise technique is hard to come across; the eyes of the characters follow you everywhere, regardless of the angle the picture is seen from.” One of the students was so impressed with the paintings that he returned to the gallery three times. He said that if he could, he would have gone to New York to see the originals.

Many of the visitors said that they'd learned about the exhibit from their friends in Bourgas, while others promised to recommend it to friends and family in the cities of Stara Zagora and Sofia.

Shocked by the Crimes of Communism

The city of Varna hosted the exhibition on May 31 through June 15, at the “Graffiti” Art Gallery. The exhibition in Varna also garnered a great deal of public attention. Teachers from the Art School and the School of Sports visited the exhibit and later brought students from the art classes. Many Varna residents and tourists came to see the paintings and left comments in the guestbook. Most of them were deeply touched and sincerely moved. They commented on the exhibition’s strong social element and expressed outrage at the brutal human rights violations and atrocities against Falun Dafa practitioners in China.

Guests were also impressed by the purity and harmony manifested in the artworks. A local artist commented that “Most of the canvases are not to be put in your room,” but he shared that his family had also been subjected to communist repressions in Bulgaria and said he had not forgotten what happened to innocent people accused of “crimes against the regime.”

Former Varna mayor and parliamentary member Hristo Kirchev attended the opening ceremony and was deeply touched by the artworks and the stories behind them.