(Minghui.org) On a warm, sunny day in Taipei, a large number of tourists from mainland China were able to learn not only history but also current events, including information about Falun Gong that is inaccessible in mainland China. Falun Gong practitioners in Taipei set up an information booth at Sun Yat-sen Memorial Hall, one of the most popular tourist attractions in Taipei.

Courage to Learn the Truth

One young man from Beijing stopped at the booth and curiously glanced at the materials on the table. Seeing the book Nine Commentaries on the Communist Party, he murmured, “I’m afraid I can’t read this. I wouldn’t be allowed to bring it back [to mainland China].” One practitioner encouraged him, “Please don’t worry--you’re in Taiwan. You can read and take the materials you want, and no one will pay any attention to you.”

The man nodded, saying he could feel the sense of freedom in Taiwan although he had been there for only a couple of hours. He worked near Zhongnanhai, the central compound of the Chinese Communist Party, and said he could tell that the difference was huge between Taipei and Beijing. When the practitioner asked if he had heard about Falun Gong, the man hesitated and said he did not want to get involved in politics.

The practitioner told him about the mistreatment of practitioners in mainland China for their belief. “You also know that the Chinese Communist Party has harmed a large number of citizens. When Falun Gong is persecuted, if we stay silent and do nothing, wouldn’t it mean we accept this tragedy and are avoiding taking responsibility to help end it?” The young man thought for a while and agreed. When the practitioner suggested that he renounce his membership in the Chinese Communist Party, he nodded in agreement and smiled. 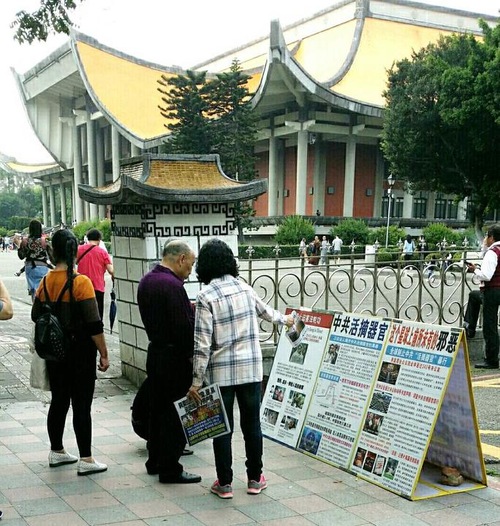 A tour guide chatted with a practitioner during a break. “These few years I have seen more tourists from mainland China of different age groups. Many of them are quite wealthy. But without traditional values, the society in China is declining dramatically,” he said. He thanked practitioners for their efforts to uphold Falun Gong’s principles of Truthfulness-Compassion-Forbearance.

A tourist from Fujian Province agreed. After hearing a practitioner explain the brutal torture practitioners in China face, he sighed, “We all know the Communist Party is atheistic. However, we are all human beings, and we should have the right to our own thinking. Only those who do not have a faith could do bad things like that [to persecute practitioners].”

A couple from Hong Kong said they had witnessed how the CCP interfered with practitioners even in Hong Kong. They praised practitioners for their perseverance in traditional values and righteous belief, saying that it was important for both Hong Kong and the rest of China.

Businessman: Falun Gong Is the Best

A businessman working in mainland China said he was aware of the hard work practitioners have done to inform tourists of Falun Gong and the persecution. “You are probably wondering why most tourists from mainland China are emotionless or do not talk to you—that is because they are afraid someone in the tour group might be watching them. But in their heart, they have seen what you do, so please keep it up,” he encouraged.

The man said that although the Chinese regime has brainwashed and threatened people for decades, it is rather weak before the practitioners’ persistence and spiritual energy. “I recently went to Ximending (a shopping district near Taipei) and was surprised to see that practitioners were able to do their meditation and pass out flyers in such a noisy place.” He added, “I also know you are doing all this for the tourists, not yourself. That is why I think you are great and Falun Gong is the best.”