(Minghui.org) Leaving the winter behind, Falun Gong practitioners in Europe set up information booths at tourist attractions to tell the public about the ancient Chinese self-cultivation practice and its persecution by the communist regime in China.

This report covers events held in Sweden, Switzerland, and Germany.

Practitioners in Stockholm came to the Karlaplan subway station in downtown every Saturday in March to demonstrate the Falun Gong exercises, pass out information, and collect signatures on a petition that calls upon the United Nations to help stop the state-sanctioned killing of practitioners for their organs in China. 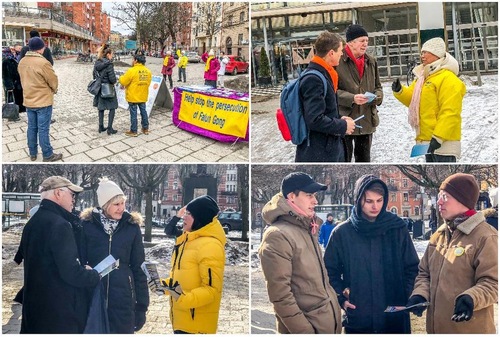 Practitioners tell the public about the persecution 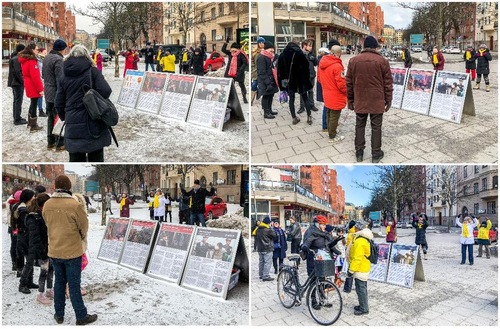 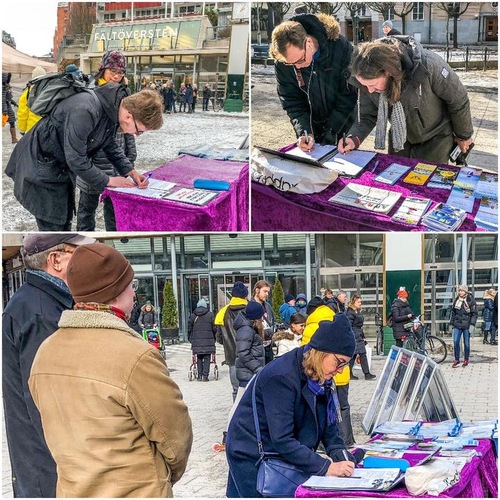 A couple stopped at the booth. The husband told practitioners that he had been concerned about the Falun Gong issue in China for a long time.

“[Forced organ harvesting] is so inhumane. It’s great that you guys persist in the peaceful resistance. If it wasn't for you, the Communist Party won't have any pressure, and they would have done worse. I support you.”

His wife said, “It’s incredible that the Chinese government officials talk and dress up decently but commit such horrible crimes. If it wasn't for your efforts, people would not believe all this.” 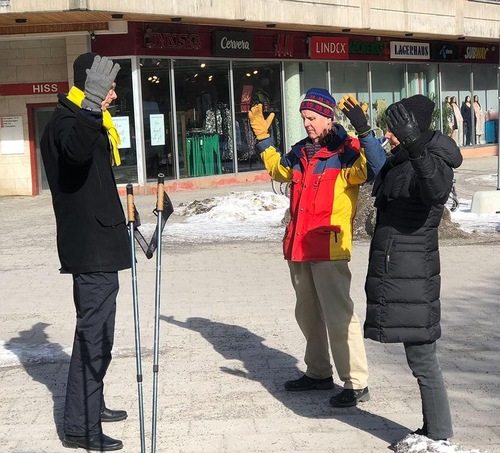 A woman said she first learned about Falun Gong last year and was happy to run into practitioners. “We have decided to officially start practicing Falun Gong,” she said.

She and her husband tried the second of five sets of exercises. Although it was cold outside, the couple said they felt warm energy going through their bodies.

A doctor stopped at the display boards for a long time. She pointed at the data related to organ transplantation and said to practitioners, “As a professional, I know clearly that it is impossible to get so many organs so easily. It is obvious that the Chinese government is killing people. It is a crime. I heard about it a few years ago. It is so wrong that it is going on.”

A few Chinese tourists expressed their respect for practitioners. A man from mainland China said he had received a phone call from a practitioner who told him about Falun Gong and the brutality of the persecution.

He said, “The communist party is really rotten. It not only persecutes Falun Gong but also raises numerous corrupt officials. Everyone in my circles curses this party. We hope it will collapse soon.”

Practitioners in Lünen, Germany have been doing the Falun Gong exercises at a local park every Saturday since last June. The peaceful and gentle movements and the beautiful music have attracted much attention.

Last Tuesday, the local newspaper covered their activity. Titled “Chinese Meditation in the Park on Weekends,” the photo report said, “Falun Gong practitioners welcome the spring with meditation in the park. Truthfulness-Compassion-Forbearance is the guiding principle of this practice, which was publicized in China in 1992. It is rooted in the wisdom of Buddhism and Taoism. It has spread to more than 100 countries and areas in the world.”

“Local Falun Gong practitioners have the group exercises every Sunday from 11 to 12,” the report said. 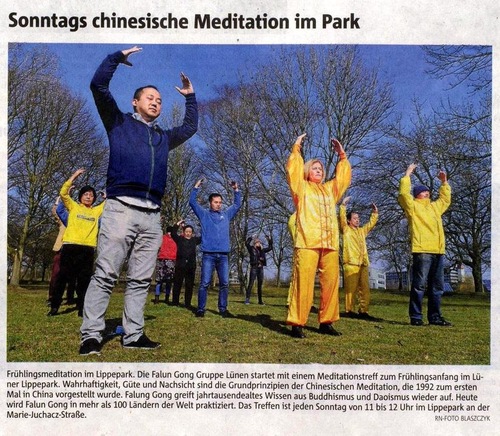 The photo report on practitioners' group exercises by the local newspaper.

A similar event was held last Wednesday in the Marché business district in Geneva. Many people signed the petitions condemning the persecution, and some took extra materials for their friends. 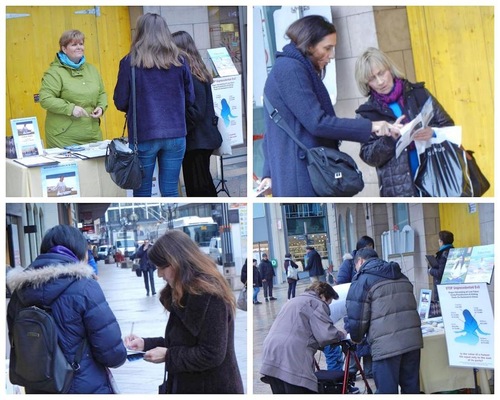 “With Faith in Master and Dafa, I Looked Within to Overcome a Tribulation”