Taiwan: Shen Yun “Awakens the Goodness Within Us” 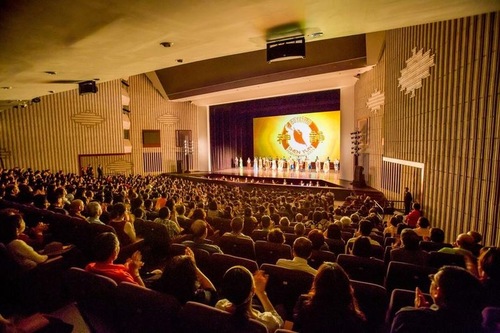 Curtain call by Shen Yun Performing Arts at the Jihde Hall of the Kaohsiung Cultural Center in Kaohsiung, Taiwan, on March 18. 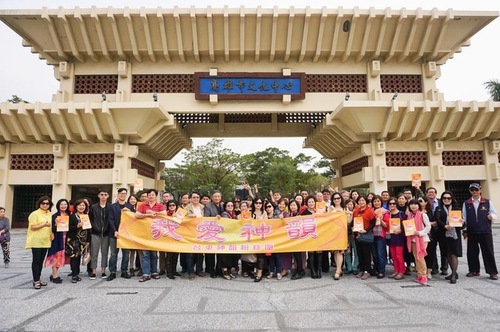 A 230-member group from Taitung in eastern Taiwan came to Kaohsiung on six buses to see the performance on March 17. 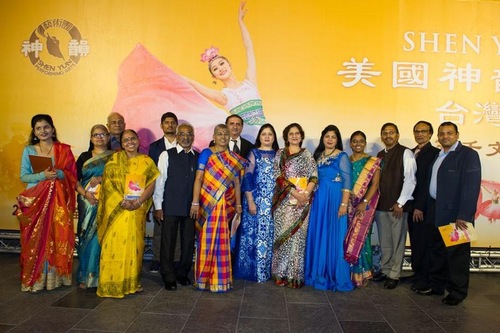 A group traveled from India to see the company's fifth performance in Kaohsiung on March 17. 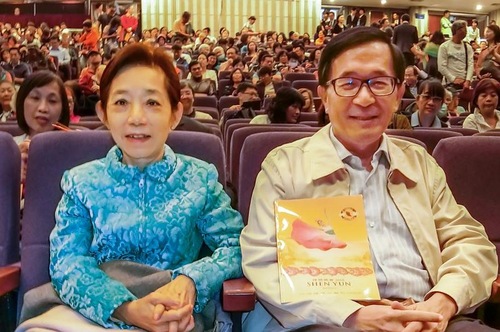 Wu Shu-chen, former First Lady of Taiwan, and her husband, Chen Shui-bian, the former president of Taiwan from 2000 to 2008, at the Shen Yun performance in Kaohsiung, Taiwan, on March 14.

“The quality of the performance is well-known to everyone. It’s world class,” said Wu Shu-chen, former First Lady of Taiwan.

“The dance and the costume forms in the settings of different dynasties are very meticulous and splendid,” she said.

“What’s rather touching is how compassion is played out, as compassion defeats evil. This part really touches my heart. I think Shen Yun can bring out the goodness within all of us, and eliminate the evil that exists in society,” said Ms. Wu.

“Hope” and “energy of compassion” 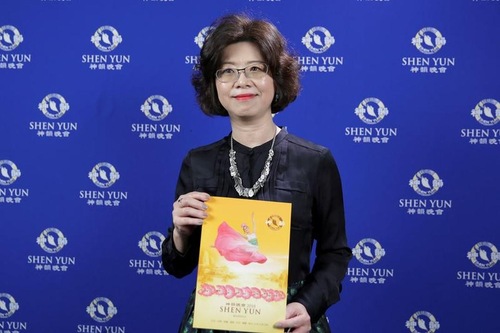 Yang Wen-hui, president of a construction company, at the Jihde Hall of the Kaohsiung Cultural Center in Kaohsiung, Taiwan, on March 17.

“I felt like I was physically at the scene... This feeling was made stronger with how the backdrop and the dancers blended together so well. I was so happy,” said Yang Wen-hui, the president of a construction company.

“I am in the construction field, and I’ve come to realize that if I apply the aesthetics of the costumes in Shen Yun to my buildings,... these buildings can have a fresh touch of beauty in our society,” she said.

“What Shen Yun is passing on to the people in this society is hope—positive energy and the energy of compassion,” Ms. Yang continued.

“This is my third time coming to see Shen Yun... I don’t think there is any word to describe how deeply I am touched. I will be back year after year to see the performance,” she said. 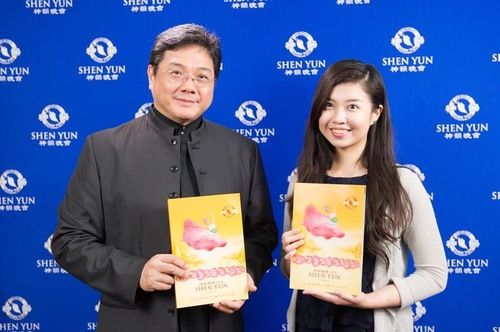 Wu Hong-Zhang (left), Taiwan Chorus’ director and conductor, at the Shen Yun performance at Jihde Hall of the Kaohsiung Cultural Center with his daughter on March 15, 2018.

“What Shen Yun disseminates is not only spiritual and artistic visions, but also humanitarian concerns. So I think it is amazingly good,” said Wu Hong-Zhang, Taiwan Chorus’ director and conductor.

“Being in the music world, besides seeing the dance performance, I also paid attention to the music performed by the live orchestra. Their synchronization is seamless and impeccable,” he said.

“I think what Shen Yun intends to express, is the reviving and carrying forward of the 5,000 years of Chinese culture. In addition, it wants to express a kind of care and concern for human beings,” Mr. Wu continued.

“I want to express my appreciation to Shen Yun’s artistic director for leading this group of people to disseminate compassion. As he has done such a tremendous task for the Chinese people around the globe, I am deeply touched and thankful to him,” he said.

“Awakens the goodness within us”

Chou Ming-chieh, associate professor at the National Pingtung University and winner of Taiwan’s Golden Melody Awards, was at the Shen Yun performance in Kaohsiung, Taiwan, on March 17, 2018.

“Seeing the performance is like enjoying a stunning feast for two hours,” said Chou Ming-chieh, associate professor at the National Pingtung University and winner of Taiwan’s Golden Melody Awards.

“Some of these stories are telling people to be good, to be compassionate... And this music, you get it right away—it speaks directly to the goodness within you,” he said.

“The voice of the vocal soloists, the range and depth of their voices, and how they could hit every single note right on the spot... You don’t need to read or understand the lyrics to feel what they are trying to say... I was sitting on the second floor and I could sense the power and energy coming from these vocalists,” Mr. Chou said.

“This production can awaken the goodness within us... It is like indulging yourself in an ancient forest—what you see and hear is simply beautiful,” he described.

Tang Hwa-ying, award winning composer, was at the Taoyuan Art Center in Taoyuan on March 8, 2018.

“I enjoyed it very much!... The entire production team must have devoted tremendous efforts to it,” said award winning composer Tang Hwa-ying.

“The coordination between the music and performers is seamless... The music arrangement is perfect. It’s not easy to have such a perfect synchronization among Western and Chinese musical instruments,” he said.

“I’m a composer, so I especially enjoy the music. I’ll take it as a reference when I am composing my own music,” Mr. Tang said.

Shen Yun will continue its Taiwan tour with upcoming performances in Taichung on March 21–23; Chiayi on March 25–26; and Changhua on March 28. For more information on tickets and dates, please visit http://shenyun.com.