(Minghui.org) Today's news from China includes incidents of persecution that took place in 10 cities or counties in 4 provinces. According to this report, 4 Falun Gong practitioners were subjected to mistreatment during their detention, and at least 7 were illegally arrested. 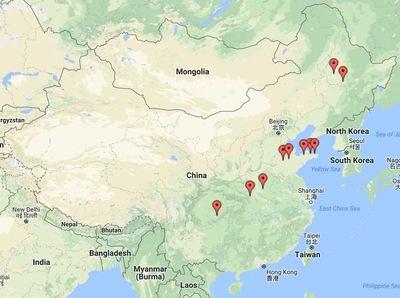 Mr. Chen Shaoyun from the Chenjiahougou Residential Community was reported for telling people about Falun Gong on the morning of March 3, 2018. He was arrested and taken to the Jinhaitan Police Station. Four officers, including Qu Jiawen, grabbed keys from Mr. Chen's pants pocket, and took him to his home. They confiscated two Falun Dafa books, weekly publications, and an MP3. They brought Mr. Chen back to the police station. Mr. Chen was released at noon.

Mr. Li Ming from Chengguan Town was arrested on February 8, 2018. He was indicted after 10 months of detention in the Gucheng Detention Center. He was given a seven-year prison term without any evidence.

Ms. Ren Xianglian's family was told to go to the detention center to get her clothing on December 5, 2017. The family then learned that Ms. Ren had been secretly sentenced to three years in prison, and would be transferred to the Jiulongpo Women's Prison. They were not allowed to meet with her.

Mr. Yu Zihua from Zhifu District was reported for telling people about Falun Gong on the afternoon of March 2, 2018. He was arrested and his home was ransacked by officers from the Xiangyang Police Station.

Ms. Ren Xiuyun, her husband, and relatives were on their way on the morning of March 1, 2018, to visit her older brother, who was suddenly ill in Shangzhi City. They were arrested at the Hadong Station at the ticket checkpoint. The police ransacked her home and confiscated a computer and a printer. She is probably being held in the Yaziquan Detention Center.

Mr. Xu Bin, Ms. Shi Shuxian, and Ms. Wang Fajuan from Chenger Village were arrested on February 28, 2018. They are being held in the Daqing City Detention Center.

Ms. Wang Yongzhen was questioned and arrested by neighborhood security personnel on the afternoon of March 3, 2018 for carrying Falun Gong materials.

Ms. Zhang Fuzhen, 73, from Licheng District, was placed under criminal detention for a day for telling people about Falun Gong on the morning of April 10, 2017. The police ransacked her home on April 18, and confiscated booklets, amulets, and books. Later, officers from the Lixia District Police Department went to her home several times to harass her.

“What Master Has Arranged Is Always the Best”

“Taiwan: Shen Yun “Awakens the Goodness Within Us””