Mr. Zhou Guoping was tied up with ropes, placed under round-the-clock surveillance, and starved. Mr. Chen Zhi was forced to squat for extended periods of time and given hardly anything to eat. Mr. Chen Ming was beaten, tied up tightly, and tied to a bed for 6 days and nights. Two of the men are well into their 60s; Mr. Zhou is the youngest, in his mid-50s. 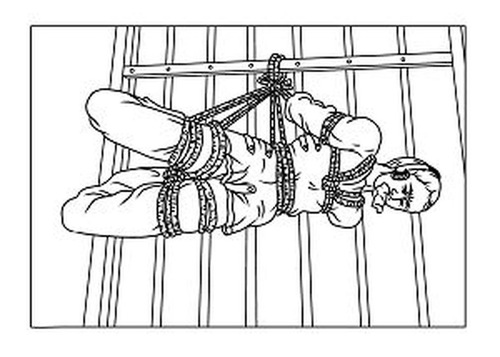 Torture illustration: Tying up with ropes.

Mr. Zhou Guoping, 55, from Meishan City, was sentenced to five years in prison on April 2015. He is being held in Ward No 5.

Mr. Chen had been tied up for days for doing the Falun Gong exercises. Instead of relieving Mr. Chen's suffering, Warden Zhang Jian tied up Mr. Zhou and shoved a ball in his mouth. Zhang claimed that the ball would “prevent him from committing suicide.” Mr. Zhou lost three teeth as result of the brutal treatment.

Mr. Zhou was taken to another cell on January 28, 2018, where he was monitored around the clock. His meals were reduced to one-third of the usual amount. Despite being starved, he still was forced to perform hard labor.

He was forced to squat for long periods of time and was given reduced meals for 18 days.

He was then transferred to Ward No. 5 where he wrote a letter to the guards, advising them to not persecute Falun Gong practitioners. This resulted in further mistreatment.

When several of his teeth became loose in 2016, prison staff took him to the dentist, who pulled all his teeth. The prison refused to give him dentures because he would not give up his belief in Falun Gong.

When he was reading an article by Mr. Li Hongzhi, the founder of Falun Gong, on October 6, 2016, the deputy warden beat him.

A new warden spotted Mr. Chen Ming doing the Falun Gong exercises in May 2017. He tied up Mr. Chen with ropes and wedged a ball in his mouth.

Prison guard Wang Huaijun yelled at practitioners and called them criminals. When Mr. Chen responded to the false accusation, Wang pushed him down, tied him up, thrust a ball in his mouth, and tied him to a bed for six days and nights.

“Dafa Blesses My Family After I Let Go of Attachments”