(Minghui.org) As the year 2019 approaches, Falun Dafa practitioners and supporters gathered in front of Toronto City Hall on December 23, 2018, to wish Master Li Hongzhi (the founder of Falun Dafa) a Happy New Year, and to express their deep gratitude. 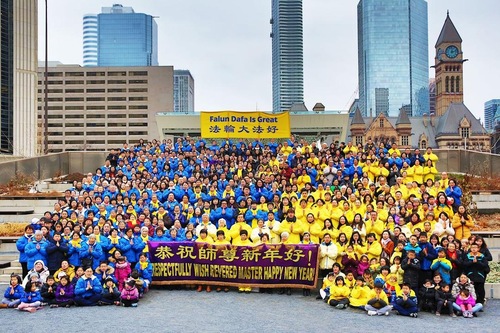 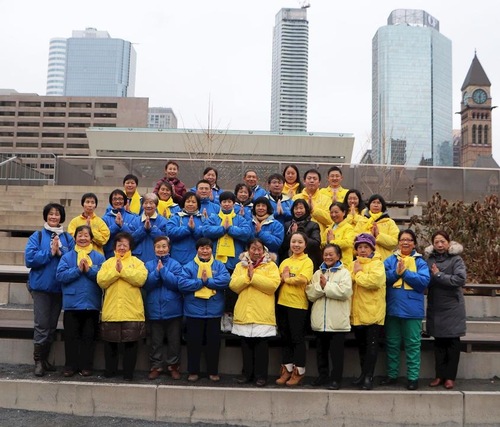 Practitioners who participate in one-on-one truth clarification are determined to be diligent in the coming new year and to help more people quit the communist organizations.

A Communist Party committee secretary at a university in Shenzhen, China asked a Falun Dafa practitioner to convey his New Year's greetings to Master. He said, “I now understand how evil the Chinese Communist Party is, after talking with practitioners. They have helped me quit the communist organizations. I would like to thank Master! Please send him greetings on my behalf! Falun Dafa is great indeed! I thank Dafa from the bottom of my heart!”

Mr. Zhang, a young professional at a large bank in Canada, used to refuse to listen to practitioners discuss Falun Dafa, but his attitude eventually changed after he learned more about the persecution. He said he was very thankful and finally realized why practitioners work so hard to tell people the facts.

Practitioner Ms. Song talked to him several times. Over time, Mr. Zhang said he felt her compassion and sincerity. One day, he told Ms. Song, “Yes! Please help me quit the communist organizations. Thank you so much! You've clarified many misunderstandings I've had.”

Mr. Lin moved to Canada in 1998. He also decided to quit the communist organizations after talking with Ms. Song. He said, “Falun Dafa must be great. That's why so many people practice it. The Communist Party is only good at deceiving people. I was fooled and joined the Young Pioneers, the Youth League, and the Communist Party. Now I've finally learned the truth. I would like to quit all of them. Thank you so much!”

A young woman named Xiao Hua was one of them. During their conversation, she told Ms. Wang that she was being paid to make these calls. Ms. Wang asked, “Fifty cents?” The young woman replied, “No, five yuan for each call. I'm paid fifty yuan after I make 10 calls.”

Ms. Wang told her, “Today's society is a mess. Some people even pay others to do wrongful things. The so-called Self-Immolation on Tiananmen Square was staged by people hired by the Communist Party. The director was only 47 when he died. The newscaster who repeatedly broadcast the show also died young. The Party's money is a hot potato. They've tried to buy your life!” Xiao Hua listened silently and then exclaimed, “What can I do?”

Ms. Wang told her, “You can quit all the communist organizations you joined, tell the others you're working with about it, and help them quit as well. Please stop slandering Falun Dafa. Our hotline saves people, and you're accumulating bad karma for yourself if you interfere.” Xiao Hua agreed immediately and said, “Thank you!” Afterward, Ms. Wang stopped receiving these types of phone calls.

Ms. Zhang spoke with a man in Shanxi Province more than 20 times. She said, “Even though at first he cursed at me, I sensed that he wished to talk.” He was eventually touched by Ms. Zhang’s sincerity. He continued talking to her but refused to quit the communist organizations he'd joined. When Ms. Zhang asked him to, “At least remember these words,” he asked immediately, “Which words?” Ms. Zhang told him to remember “Falun Dafa is good and Truthful-Compassion-Forbearance is good.” When he asked why they were significant, Ms. Zhang explained using several historical stories. After quietly listening, the man said, “I would like to quit the communist party. Thank you so much!”