On December 8, 2018, practitioners collected signatures on a petition at Zeil Shopping Promenade, Frankfurt's most popular shopping district. The petition called for an end to the persecution, especially the atrocity of harvesting organs from living Falun Gong practitioners. The practitioners held a candlelight vigil in the evening. Despite the cold and rainy weather, many people stopped to talk with practitioners, voiced their support and signed the petition.

Crowds of people who went to the Zeil Shopping Promenade over the weekend watched videos about Falun Gong on a large screen. Practitioners set up a booth to distribute flyers and collect signatures. A group of practitioners quietly sat holding wreaths in remembrance of their fellow practitioners who died in the persecution.

People Support the Petition: “No one should be imprisoned for their belief” 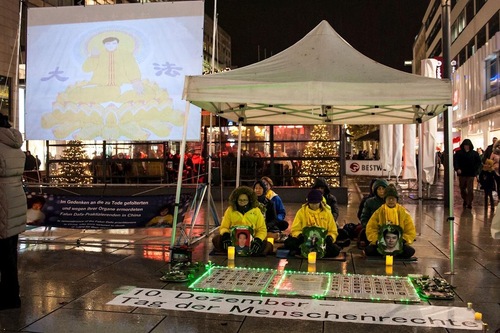 Practitioners hold a candlelight vigil to expose the persecution. 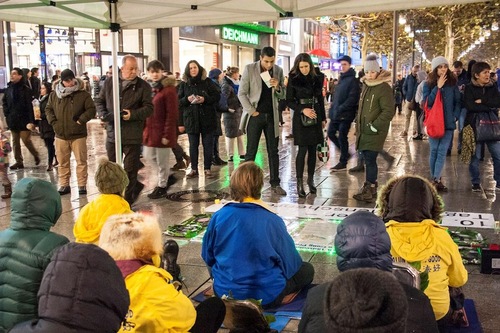 Despite the inclement weather people stopped to watch the videos and learn about the persecution of Falun Gong.

Dorothea signed the petition and brought her friend to sign as well. She told a practitioner that she had read a flyer before and was angered by the Communist Party's crimes against innocent people. Referring to the crime of organ harvesting she said, “The Communist Party must know that we clearly know what's happening in China. We don't want to see it continue. Why don't people think about where these organs are coming from? No German should go to China for an organ transplant!” 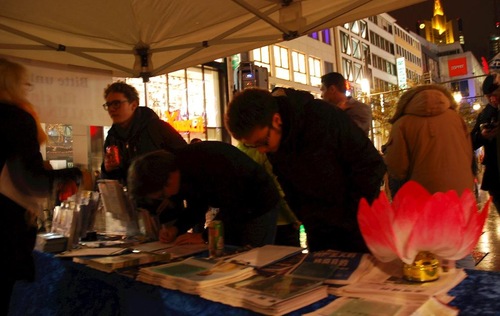 About ten young men came in a group and chatted with practitioners. They asked many questions, and then signed the petition. One of them said, “No one should be imprisoned for their belief and no one's organ should be stolen! It's a despicable way of suppressing belief. I believe society will condemn it and pressure the Communist Party to stop.”

Another young man added, “If no one speaks up, the Communist Party will be reckless. We have to raise the issue at different levels, especially between the governments. Frankfurt is a financial center and has many connections with China. We should take every opportunity to bring it to the table, and put China under sanction if needed.”

A woman named Claudia signed the petition and said, “I hope Falun Gong practitioners will have the freedom to practice their belief in China. I hope the persecution will stop. I have read a lot about China from the Epoch Times, and I know about the organ harvesting. It's so cruel!” 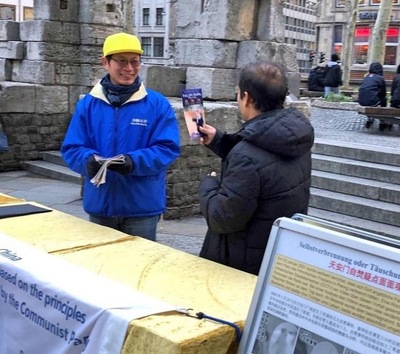 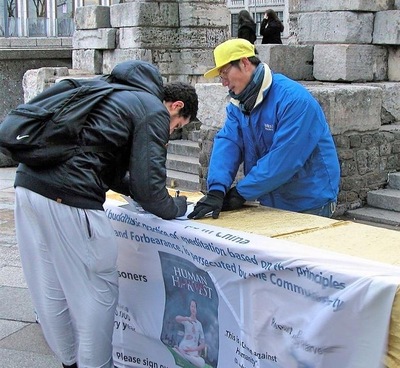 Practitioners in Cologne collected signatures in front of the Cologne Cathedral on December 8 and held a candlelight vigil in the evening.

Despite a storm warning, the activities continued throughout the afternoon and evening. Although it rained heavily in the surrounding areas, it only drizzled at the activity site. Despite the cold weather, many people stood in the rain and talked to practitioners. One man said his feet were completely “frozen,” but he still talked with a practitioner for more than ten minutes.

As practitioners sat quietly in the dark holding candles to commemorate fellow practitioners who died in the persecution, a passerby exclaimed, “How admirable!”

Many people stopped and took flyers. They continued to sign until the tables were folded up at the end of the day. 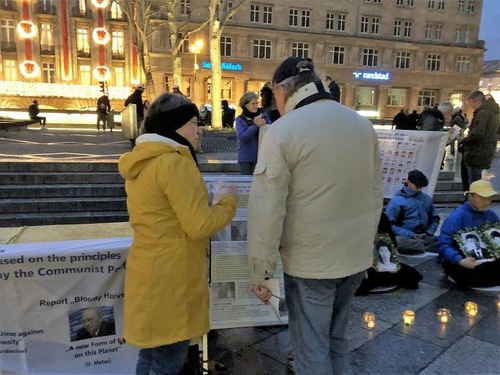 A passerby learns about the persecution of Falun Gong during the candlelight vigil.

Some people said they knew about the communist regime's persecution of Falun Gong. Others said they've signed the petition. Most people who stopped to talk said they sincerely hope the persecution will end soon and hope Chinese people will have freedom of belief.

“Ecuador: Increasing Awareness of the Persecution in China During Human Rights Week”