(Minghui.org) Australian Falun Dafa practitioners attended a three-day event near Melbourne between October 12 and 14 to introduce the practice.

The VACSAL Senior Football & Netball Carnival is a statewide celebration of native culture held in Ballarat, the third largest inland city in Australia. 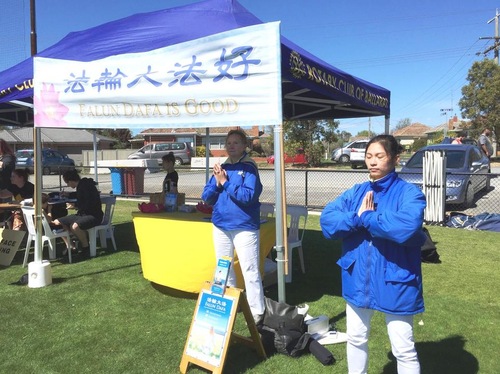 Naomi Lovell, an event organizer who works in community health, was impressed by the exercise demonstration and approached the booth for more information. “This is a beautiful exercise,” she said. She was especially curious about improving her mind nature through the principles of Truthfulness-Compassion-Forbearance. 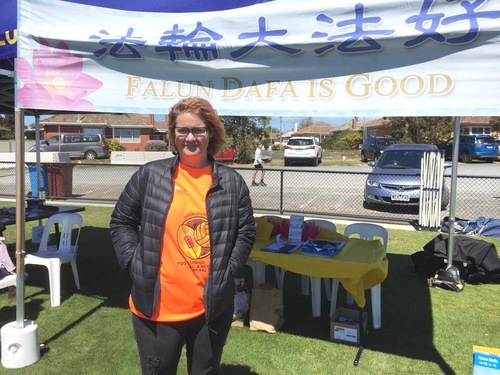 Naomi, who lives close to Grampians National Park, said that she looked forward to attending one of the upcoming Falun Gong workshops.

Having heard about the persecution against Falun Gong in China previously, Lovell said that she found forced organ harvesting unimaginable, “I think that [organ harvesting] is a horrific human rights violation. It is horrifying to me and it needs to stop.” 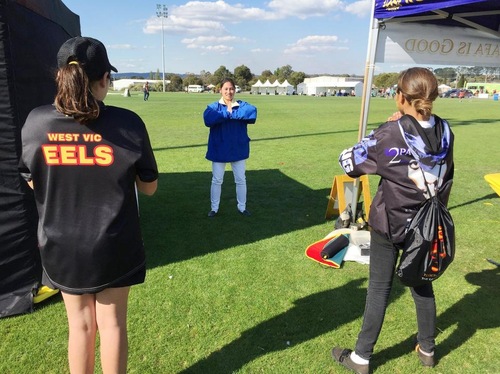 People learn the exercises from practitioners.

Dianne and Tahlia came with their parents from Western Australia to watch their uncle's football games. They learned how to make paper lotus flowers from practitioners, who are part of an initiative called “Petals of Peace.” The lotus flower, a practitioner explained, represented purity and happiness according to traditional Chinese culture.

Some children learned the exercises along with their parents. “These exercises seem to be good for all ages. I will learn them first and then teach my kids,” said one parent.

One tourist said that he noticed how practitioners could extend their arms in a still position for a very long time. He tried it and said he experienced “a peaceful mind” during the standing meditation. He said that he would read more about the practice on the Falun Dafa website (Falundafa.org).

Quite a few people signed petitions calling for an end to the suppression in China.

“Giving Up a Chance for a Salary Increase”