(Minghui.org) A pharmacist in Yongxiu County was sentenced to prison again for refusing to renounce Falun Gong, a spiritual discipline being persecuted by the Chinese communist regime.

Ms. Ge Ling, 65, was seized on April 21, 2016, and taken to Jiujiang City Detention Center, where she was tortured so brutally that she needed emergency treatment.

She appeared in the Yongxiu County Court on October 19, 2016. Only her husband was allowed to attend the trial. Her lawyer entered a not guilty on her behalf, as no law in China criminalizes Falun Gong. The presiding judge sentenced her to four years in prison. The Jiujiang City Intermediate Court ruled in February 2017 to uphold the original verdict, and she was admitted to Jiangxi Province Women’s Prison soon afterward.

Her husband hasn’t been allowed to visit her in prison during the past ten months.

This is not the first time that Ms. Ge has been targeted for her faith. She was first arrested in November 2000 and given three years of forced labor. The police seized her again on December 6, 2004, and sent her to a forced labor camp for another two years. Her term was later extended to February 26, 2007. She was arrested for a third time on November 1, 2008, and sentenced to three years in prison.

According to insiders, Ms. Ge is very weak and has trouble standing up following her latest arrest. Her husband worries whether she has been subjected to the kind of torture she suffered in her prior incarcerations.

Forced to Kneel on a Small Bench

Ms. Ge was forced to kneel on a small bench for hours on end. The guards also stuffed rice into her mouth while she was kneeling. When she spit it out, the guards scooped the rice into a pile and forced her to eat every grain off the floor.

Bricks Hung Around the Neck

Ms. Ge had her hands twisted behind her back and secured to a door frame. The guards then hung up to six wet bricks by metal chains around her neck for 40 hours. 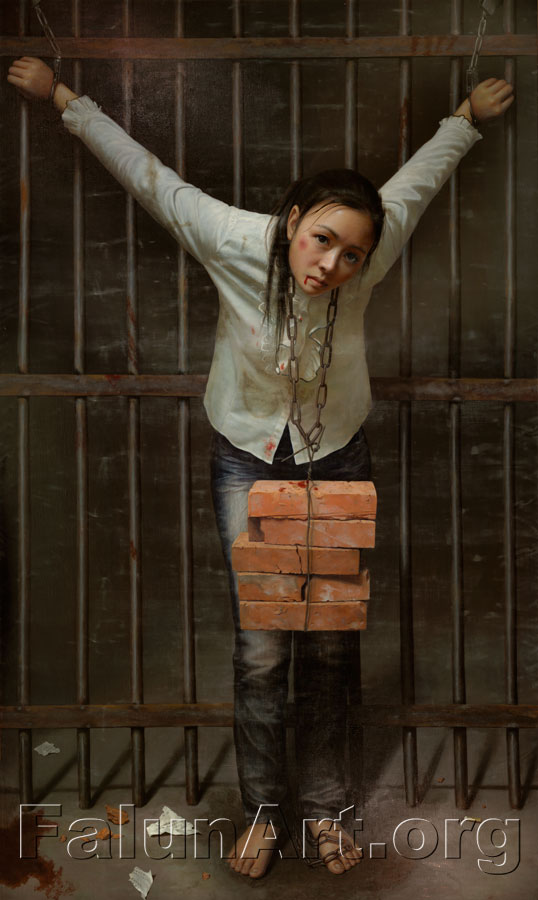 Ms. Ge was kept in solitary confinement for nearly a year. The guards ordered drug addicts to beat her on a regular basis. They often grabbed her hair and slammed her head against the wall. They also punched and kicked her. Her front teeth were knocked out due to savage beatings. She was forced to swallow the blood oozing out of her mouth.

To drown out her screams, they turned the TV volume to the maximum. They once almost strangled her using a bed sheet twisted into a rope.

Ms. Ge went on a hunger strike for more than a month and was brutally force-fed. Her nostrils festered.

Ms. Ge was once deprived of sleep for two straight nights.

Ms. Ge was also forced to work for extended hours without pay. Her eyesight quickly deteriorated, and she was verbally abused for failing to finish her quota.

She was also ordered to mop the floor, fold everyone’s quilts, and climb to high places to clean windows.

Denied Use of Restroom

Ms. Ge was retaliated against for telling her family of her plight in the labor camp. The guards didn’t allow her to use the restroom for more than six hours. Her bladder hurt for the next few days.