(Minghui.org) September is a busy month for the Falun Gong practitioners in New York. They participated in community activities including the Fall 2017 Queens College Club Day and the 63rd Drive Rego Park Festival, spreading the practice of Falun Gong. Falun Gong, also known as Falun Dafa, is a spiritual discipline taught to the public in China in 1992 and is now practiced by people in over 100 countries and regions.

The CUNY Queens College held its 2017 Club Day on September 13, 2017. Members of the Falun Dafa Club shared the practice with its students and faculty members as great way to relax and improve physical and mental fitness. In about an hour and a half 60 people applied to join the club and left their contact information.

One female student told a practitioner that she's read the Falun Dafa books during the summer and was eager to learn more. She did the exercises with the practitioners at the event.

A student from China came to the booth and left her contact information. She then told the practitioners that she knew about the unlawful persecution of Falun Gong in China and the atrocity that the Chinese authorities sanction harvesting organs from practitioners who are incarcerated for their faith. She wanted to know more details about the persecution. 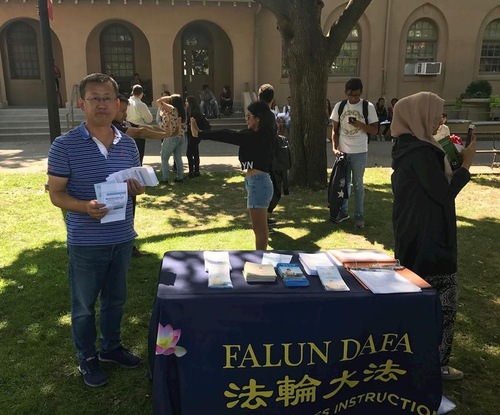 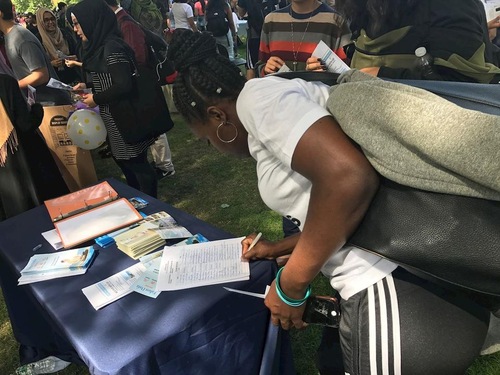 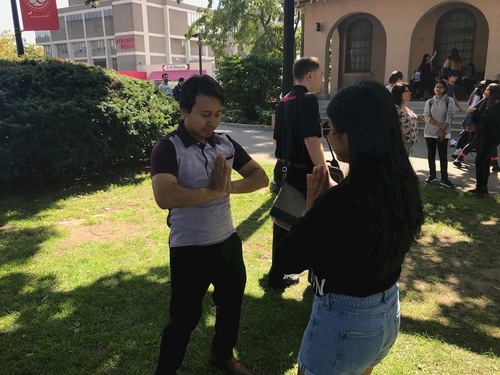 A student learns how to do the first Falun Dafa exercise at the event. 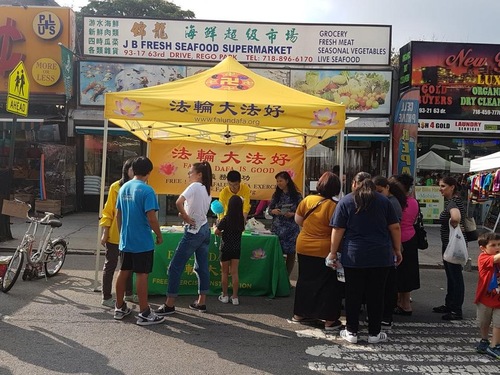 Passersby surround the Falun Dafa booth and learn about the practice as well as the ongoing persecution in China.

The practitioners participated in the 63rd Drive Rego Park Festival on September 16, 2017, and shared benefits of the practice with passersby. There were about 50 booths set up at the festival, which was held across the street from the Rego Center near the Russian, Spanish, and Chinese communities. Many Russian people expressed strong interest in the practice and some came by the booth several times to learn about the practice and the exercises. 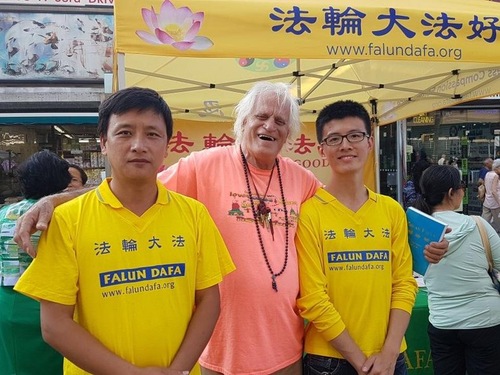 A man’s (middle) back pain disappears after he encounters Falun Gong at the Festival.

An elderly man, after talking to the practitioners, learned about the miraculous healing power of the practice, and understood why the persecution was wrong. He took the book Falun Gong with him before he left. He came back shortly after and was very excited. Pointing at his notebook he told the practitioners that he copied down a paragraph from the book, and his back pain immediately disappeared. He said that this has never happened before, nor when he did other practices. He took the book Zhuan Falun with him this time and promised to carefully read and cherish it.

Festival goers come to the Falun Dafa booth and learn about the practice.