(Minghui.org) Today's news from China includes incidents of persecution that took place in 8 cities or counties in 4 provinces. According to this report, 1 Falun Gong practitioner was subjected to mistreatment during his detention, and at least 10 were illegally arrested. 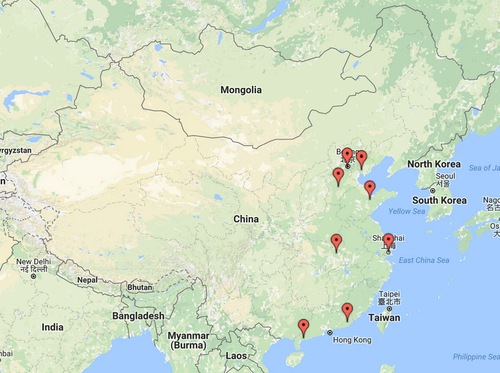 Ms. Sun Baomei from the Pudong New Area was reported by security officers for talking to people about Falun Gong near the Chinese Art Palace, Shanghai World Expo, in June 2017. She was arrested and her home ransacked by officers from the Shanggang New Village Police Station. She is being held in the Pudong New Area Detention Center.

Ms. Miao Mingli was arrested in mid-May 2017 for suing former Chinese Communist Party head Jiang Zemin. She was taken to the Weifang City Detention Center. She was officially placed under arrest on June 30, 2017.

Ms. Lin Jieping was arrested and her home ransacked by police officers and officers from the 610 Office on July 3, 2017, for talking to people about Falun Gong.

Officers from the Huazhou City 610 Office, the Domestic Security Division, the State Security Division, and the Xinshidai Farm Police Station broke into Ms. Wang Mingjuan's home and arrested her at noon on June 29, 2017. They ransacked her home, and confiscated Falun Gong books and materials.

Mr. Wang Baoshan was arrested at work by plainclothes officers on July 3, 2017. His home was ransacked.

Mr. Li Zunxiang, Mr. Feng Yu, and Ms. Li Shuying were arrested at Mr. Li's home by officers from the Jianshejie Police Station, led by political head Ren Jiansen, on the afternoon of June 21, 2017. The officers confiscated about 40 Falun Gong books and 4,000 yuan in paper bills with Falun Gong information printed on them. The three practitioners were taken to the police station, and released that evening.

Mr. Li Hongshan is being held in the No. 5 Team at Hulan Prison. He is in solitary confinement for refusing to wear a prison uniform.

Mr. He Zaixi and Ms. Cai Shenglan were arrested by officers from the Macheng City Police Department on June 27, 2017, for talking to people about Falun Gong. They were held in the Macheng Detention Center for five days. The officers ransacked their homes and confiscated photos of the founder of Falun Gong, computers, printers, Falun Gong books and materials.