(Minghui.org) Today's news from China includes incidents of persecution that took place in 9 cities or counties in 6 provinces. According to this report, 2 Falun Gong practitioners were subjected to mistreatment during their detention, and at least 9 were illegally arrested. 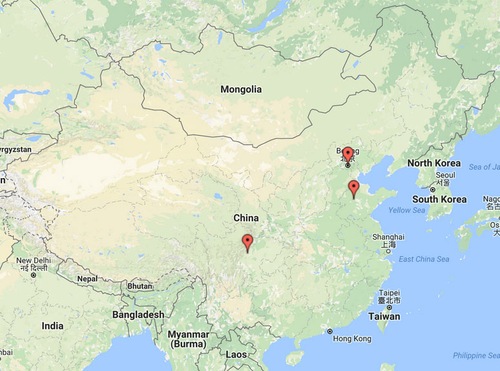 Ms. Yu Fulan from the Pinggu District was officially placed under arrest on June 14, 2017, by the No. 1 Branch of the Beijing City Procuratorate.

Ms. Yin Xianju and Mr. Bai Daiyu went to the Tianpeng Town Police Station on the afternoon of June 27, 2017, to request the release of an imprisoned practitioner who was in critical condition due to the abuse they received in prison. Instead, they were arrested.

Ms. Yin was released that evening due to having high blood pressure. Mr. Bai was taken to a detention center.

Ms. Zhu Xiaodong was arrested by officers from the Domestic Security Division, the Qianfoshan Police Station, and the Lixia District Criminal Police Team on May 18, 2017, for hanging Falun Gong banners in Jinan City.

Ms. Zhu is being held in the Jinan Detention Center. She was recently officially placed under arrest by the Lixia District Procuratorate and the Qianfoshan Police Station.

Ms. Gao Chunlian was sentenced to five years in prison on February 11, 2015, and has been held in Hebei Provincial Women’s Prison since August 16, 2015.

Ms. Gao has been tortured in prison, and her health has deteriorated. Her heart is very weak and she cannot do the labor work.

She questioned the officers why they broke in, but they ignored her and called for more people to search the home. They confiscated a cell phone, computer, bank card, her identification card, and thousands of yuan in cash.

Ms. Tan tried to stop them, but an officer grabbed her hair and smashed her head against the wall. Another person slapped her face. Ms. Tan fell on the ground, bleeding.

The officers did not leave any documentation before they left. Ms. Tan was forced to leave home to avoid being arrested.

Mr. Jiang Rongxin was in critical condition around October 10, 2016. His family and attorney urgently requested that he be released on medical bail. However, the people in charge of his case transferred him to the Shenzhen No. 1 Detention Center.

Mr. Jiang’s attorney went to the detention center five times and requested to visit him. All of the requests were denied.

Ms. Tian Deyu, in her seventies, was arrested at her home on November 1, 2016. She has been held in the Nanming District Detention Center for about eight months.

Her husband was sick, and his condition became worse after Ms. Tian was arrested. He passed away on May 18, 2017. The detention center did not allow her to attend the funeral.

Mr. Qu denied the charges against him, and his attorney pleaded not guilty on behalf of his client.

Ms. Chen Zhaiqin and Mr. Gao Wenzhi were arrested and taken to a detention center on June 23, 2017.

Ms. Bai Jing was arrested by officers from Yuhuang Police Station and taken to a detention center on June 2, 2017.

“My Experiences in Practicing Falun Dafa”