(Minghui.org) In the 18 years of persecution against Falun Gong, the Tailai Prison in Heilongjiang Province has always been a centralized location used by provincial officials to persecute practitioners.

Those who had strong faith in the practice were often transferred from other detention facilities to Tailai Prison. There, they were subjected to long-term torture and high pressure from the prison guards and inmates.

Upon arrival, those practitioners would be forced to write statements renouncing Falun Gong. Those who refused to write it would be subjected to many kinds of torture: being hung up, having stand or squat for extreme periods of time, sleep deprivation, having ice water forced down their throats, being made to stand in icy water in the winter, solitary detention, and the tiger bench, among others. 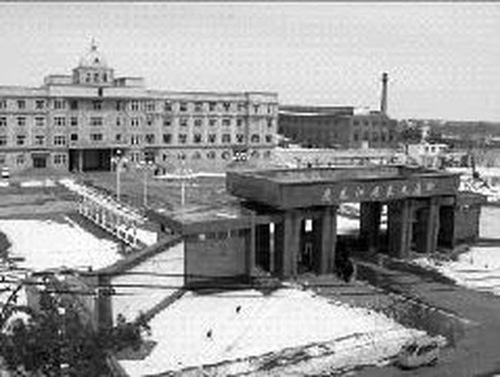 One of the commonly used torture methods at Tailai Prison was sleep deprivation.

Mr. Zhang Haitao was forced to wear handcuffs and shackles for ten days and not allowed to sleep for three days in November 2015 because he refused to do the forced labor.

Mr. Liu Jingxun, 72, was also deprived of sleep and still forced to do hard labor during the day.

Mr. Wang Weijun wasn't allowed to sleep for a week. The guards kept verbally abusing him. When he dozed off, the inmates poked him with needles, sprayed chili water in his face, and force fed him with icy water.

Mr. Shi Shixin, in his 30s, was brutally beaten in Ward 10 in early 2015. He bled profusely from his head. To keep other inmates from seeing his injuries, the guards locked him in solitary. His face was unrecognizable from another beating. He was put in solitary again.

Mr. Wang Weijun, also in his 30s, was detained in Ward 15 between 2007 and 2009. Because he refused to renounce Falun Gong, the guards beat him with an inch thick PVC pipe filled with sand.

Sprayed with Chili Water and Restrained on the Tiger Bench

After reporting that the prison had tortured Falun Gong practitioner Zhang Haitao, practitioner Xu Wenlong was held in solitary confinement from December 3-18, 2015.

The guards restrained him on a “tiger bench” for six days. They didn't let him sleep and sprayed chili water on his head, face, and neck from 10 to 20 times a day. “It was enough to wash my hair,” Mr. Xu said.

When he turned his head aside, the guards sprayed it directly into his eyes. The pain was excruciating and his vision was significantly affected. 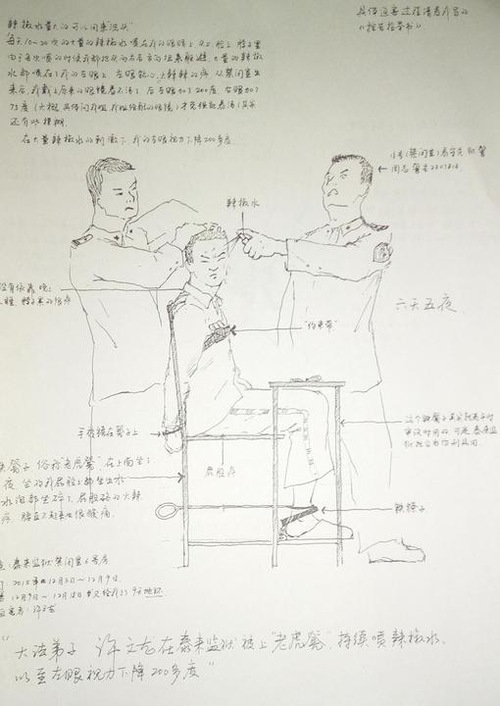 Mr. Xu's drawing of the torture of being restrained on the “tiger bench” and sprayed with chili water

After the guards released him from the “tiger bench,” they shackled him to a ring affixed to the ground for another nine days.

His wrists hurt if he tried to lie down to sleep. The confinement area was very cold, but he was only given thin clothes to wear. He was on a hunger strike and became emaciated. Sitting on the concrete floor for nine days caused great pain in his legs, hips, and buttocks. 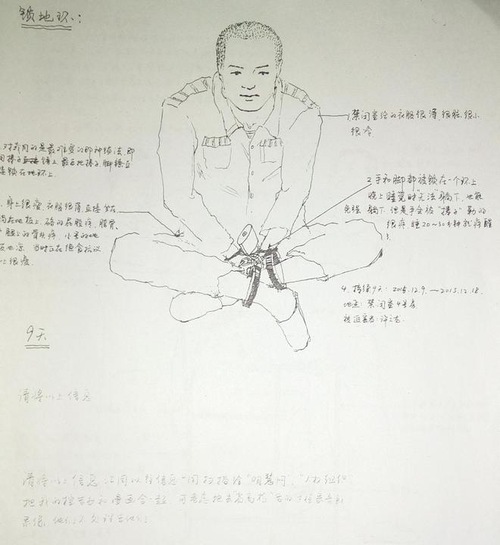 Mr. Xu's drawing of him being locked to the ground

Mr. Liang Jinyu was sentenced to ten years for sharing Falun Gong articles with other practitioners in 2002. He was closely monitored and severely tortured at Tailai Prison as a result of not giving up practicing Falun Gong. One officer used a needle to stab his genitals. In 2003, he was beaten so badly that he had bleeding in his brain and was confined in a hospital for two months.

Practitioners were also subjected to extreme cold or heat.

Mr. Wang Weijun was once forced to stand under the baking sun in the summer while wearing a heavy coat and pants. When he fainted because of the heat, the guards poured cold water on him to bring him around. When he got thirsty, they gave him salt water to drink.

In the winter of 2015, Mr. Zhang Yuliang was subjected to the freezing torture. The guards took off his clothes, forced him to sit on the ground, and then opened the window to let the cold wind blow on him.

As of July 2017, there are 30 Falun Gong practitioners still suffering persecution at Tailai Prison. They are: