(Minghui.org) Today's news from China includes incidents of persecution that took place in 17 cities or counties in 10 provinces. According to this report, 2 Falun Gong practitioners were subjected to mistreatment during their detention, and at least 36 were illegally arrested. 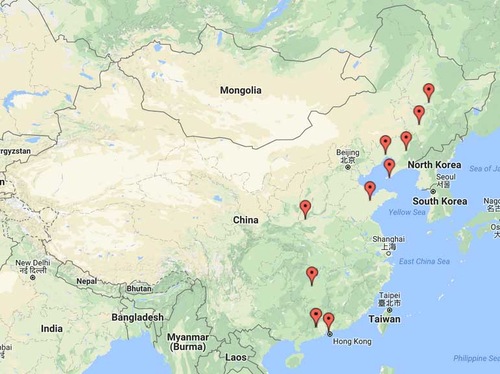 Ms. Li Mingxia, 48, and Ms. Xue Caiping from Zhucheng City were reported for talking to people about Falun Gong in the Yantai Development Zone on October 22, 2017. They were arrested by officers from the Fulai Police Station and detained at Yantai City Detention Center.

Ms. Yang Guiqin, Mr. Li Guibin, and Ms. Yang Yuqing from Yi County were arrested on the afternoon of October 18, 2017 for talking to people about Falun Gong in Liuwentun Village.

Mr. Fang Yi, a retired teacher from Xijiang University, was arrested in Yunfu City on October 25, 2017. His home was ransacked, and he was detained at Yunfu City No. 1 Detention Center.

Ms. Sun Xiuli from Hongqi Village, Qitamu Town, Jiutai District, was arrested by officers from the Qitamu Police Station in July 2017. The officers confiscated a Falun Gong book and photos of the founder of Falun Gong. Ms. Sun was held at Jiutai Detention Center for 10 days.

Ms. Cao E was arrested by the Development Zone police on October 8, 2017. The officers confiscated Falun Gong books, two computers, a printer, and a plastic sealing machine. Ms. Cao is being held at Yaojia Detention Center.

Ms. Wu Aiyun from Qiaotou Town was arrested by officers from the Qiaotou Police Station on October 13, 2017. The officers confiscated Falun Gong books and 1,300 yuan in cash. Ms. Wu was held in a detention center for 13 days.

Mr. Deng Junyou was arrested on October 13, 2017. He was detained at Loudi City Lockup Center and then transferred to the Detention Center on October 28.

Ms. Li Guixia and Mr. Fu Limin, who were displaced, were arrested on September 27, 2017. Their whereabouts are unknown.

Ms. Fang Hong and Ms. Wang Hui were both sentenced to prison for refusing to renounce Falun Gong.

The two women were arrested on October 27, 2016 and first appeared in court at the end of August 2017. They both emphasized that they broke no law by holding firm to their belief.

The sentencing hearing was held on September 29 and lasted 10 minutes, with the presiding judge convicting both practitioners.

Mr. Li Lanqiang's lawyer received a phone call from Fangshan District Court on October 27, 2017 informing him that his client had been sentenced to three years in prison.

His lawyer demanded his acquittal at each of the court hearings. However, the presiding judge convicted him, even though no law in China criminalizes Falun Gong.

Ms. Zhao Ting was arrested on October 16, 2017 and is currently held at Lanzhou City Rehabilitation Center.

This is not the first time that Ms. Zhao was targeted for refusing to renounce Falun Gong. Both she and her husband, Mr. Wang Yuqing, were arrested numerous times. She had to leave home for long periods of time to avoid persecution. Her latest arrest took place after police tracked down Mr. Wang, through whom they learned of Ms. Zhao's current residence. Several officers staked out her residence and seized her when she stepped out.

Mr. Yang Futian was sentenced to 4 years in prison for refusing to renounce Falun Gong.

Mr. Yang and his wife, Ms. Sun Jing, were arrested at home on May 25, 2017. Though Ms. Sun was released later that night, Mr. Yang remains detained. During the trial on September 7, his lawyer entered a not guilty plea, as no law in China criminalizes Falun Gong. The presiding judge, however, still convicted Mr. Yang, whose family received the verdict on October 26.

The 51-year-old woman used to be an English teacher in Heihe City, but lost her job after the Chinese communist regime began to persecute Falun Gong. She moved to Daqing, where she was arrested on March 22, 2017 after local police tracked her down. The local Huluqu Procuratorate issued an indictment against her on October 18, and Ms. Hao received the indictment five days later at the Daqing Detention Center.

Ms. Zhou Shuhuan was arrested on August 22, 2016 and indicted four months later. It was learned in March 2017 that she had been sentenced to 7 years in prison. She appealed, but the verdict is not known. She was admitted to Shenyang Women's Prison on July 18, 2017.

Ms. Zhang Xiuxia was arrested on October 24, 2016 and indicted one month later. While she was held at Dayingzi Detention Center, her family wasn't allowed to bring winter clothes for her. She revealed that she was forced to sleep on a wooden board without any bedding.

Ms. Zhang's lawyer received a phone call in mid-March 2017, informing him that his client was scheduled to appear in court on March 14. The lawyer arrived in Chaoyang County in the afternoon on March 13, only to receive another call saying the hearing had been canceled.

Ms. Zhang was released in late March. She found out later that she had been sentenced to one year in prison, which was suspended for two years.

Dr. Kang Hong, a local physician, 49, was arrested on October 28, 2016 while distributing Falun Gong informational materials. His family didn't know what happened to him until weeks later. Then he was indicted in late September 2017 and appeared in court shortly afterwards. Dr. Kang was sentenced to two years in prison for refusing to renounce Falun Gong.

This is not the first time that Dr. Kang has been targeted for this faith. He was placed in forced labor three times and previously sentenced to prison.

Ms. Li Runfang was arrested by officers from Jianhe Police Station on September 5, 2017. She has been detained for more than 50 days. The police haven’t presented any legal documents to Ms. Li’s family. Her family went to the police station to inquire about her situation on October 24. The officers said that they were seeking a heavy sentence for her and that they have submitted her case to the Xinhualing Procuratorate for approval of her arrest.

Ms. Yuan Xiuying from Qilihe District was arrested by officers from Chengguan Domestic Security Division on June 18, 2017. She has been detained for more than four months.

Ms. Yuan, 50, was a former employee of Minbai Group. She started to practice Falun Dafa in September 1996. After the persecution started, she was fired and detained twice. Her home was ransacked three times.

Chief Huang Hai from Huanghailu Police Station led Liu Yunfeng and more than a dozen officers to Ms. Zhou Haiyan’s home on the afternoon of October 8, 2017. They tricked Ms. Zhou into opening her door by saying they were there to inspect the water meter. Ms. Zhou and her younger brother were at home. They handcuffed Ms. Zhou and confined her brother in one of the rooms.

Without presenting a search warrant, the police ransacked Ms. Zhou’s home and confiscated over 100 copies of Falun Dafa books, two laptop computers, three computers, about 70,000 yuan in cash, etc. After Ms. Zhou’s husband went to request their belongings, 50,000 yuan of the cash was returned to him.

The police forced Ms. Zhou to sign by pressing her fingerprints on some documents at the police station. Ms. Zhou was then transferred to Yaojia Detention Center.

“My Husband No Longer Needed Heart Surgery After My Heart Changed”