(Minghui.org) Falun Gong practitioners gathered at Gustav Adolf Square in Gothenburg on July 16 and 17 to raise awareness of the brutal persecution of Falun Gong that is going on in China.

On July 20, 1999, 17 years ago, the Chinese Communist Party (CCP), under its then leader Jiang Zemin, launched the brutal persecution of Falun Gong, a spiritual discipline based on the principles of Truthfulness-Compassion-Forbearance.

The sunny weekend brought out many passersby who stopped to read the posters about Falun Gong and the persecution in China. Several practitioners demonstrated the five exercises.

An elderly practitioner spoke for a long time with a passerby about Falun Gong. In the end, the man asked for a copy of the Falun Gong book. He happily left with a copy in his hand.

A Chinese practitioner who began practicing Falun Gong in China in 1998 had drifted away from the practice when she moved to Sweden. When she saw other practitioners on the square, she was delighted and said that she would take up the practice again.

Practitioners handed out leaflets and information materials about the organ harvesting and asked people to sign a petition to help end the persecution.

An Update to ‘Bloody Harvest & The Slaughter,was published on June 22, 2016, by independent investigators former Canadian lawmaker David Kilgour, human rights lawyer David Matas, and journalist Ethan Gutmann. The report shows that China has been carrying out between 60,000 and 100,000 organ transplants annually since 2000, and that most of the victims have been Falun Gong prisoner of conscience. News of this report has now been published in many international media and also in the Swedish daily newspaper, Dagens Nyheter. 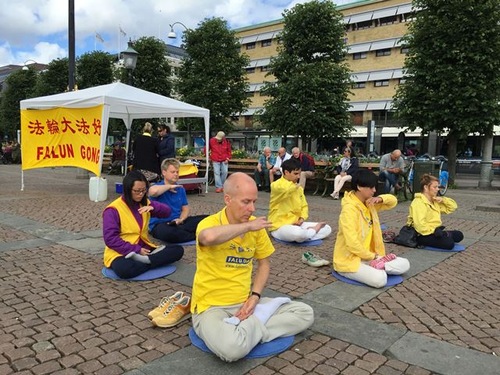 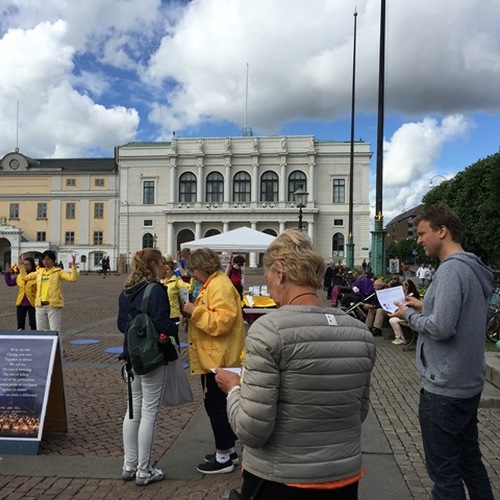 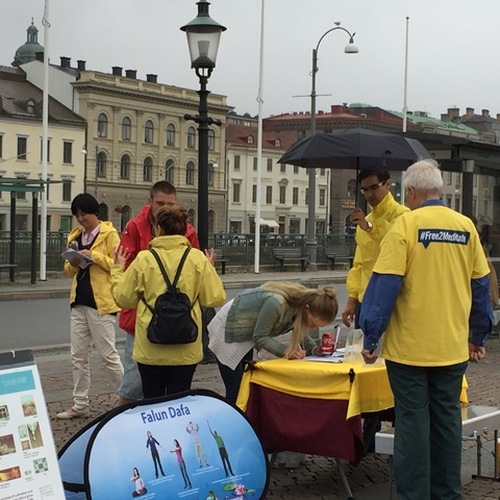 Many local citizens and tourists were disturbed to learn about the state-sanctioned forced organ harvesting and signed a petition condemning the crime.

Gustav Adolf Square is a popular tourist destination, and many tourists from China passed by over the weekend.

One such group that came on a bus did not dare to stop, but circled around the square and seemed to be very curious. They hid behind a bus shelter and took photos.

But some Chinese visitors were braver and accepted informational materials from the practitioners.

Since the beginning of the persecution, the Chinese regime has spread slanderous propaganda about Falun Gong. The media in China are under strict state control, and many Chinese do not have a chance to learn the truth about the persecution and what Falun Gong is really about. Hoping to dispel their misconceptions, practitioners spoke with them and offered them informational materials in Chinese.