(Minghui.org) Two Members of European Parliament (MEP) wrote a letter to Mr. Cao Jianming, the Supreme People's Procuratorate of China, on July 20, 2016. The letter urged him to bring perpetrator Jiang Zemin, the former dictator of the Chinese Communist Party (CCP) to justice.

July 20, 2016 marks the 17 th anniversary of the persecution of Falun Gong in China. The letter was initiated by Dr. Cornelia Ernst, an MEP from Germany, and cosigned by Mr. Stefan Eck, another MEP from Germany.

This is the second letter requesting an immediate and public prosecution of Jiang Zemin for the ongoing persecution of Falun Gong and systematic, state-sponsored, forced organ harvesting from living Falun Gong practitioners in China.

Dr. Cornelia Ernst initiated a letter at the same time last year, which was cosigned by MEP Prof. Dr. Klaus Buchner from Germany and Ms. Merja Kyllönen, an MEP from Finland. 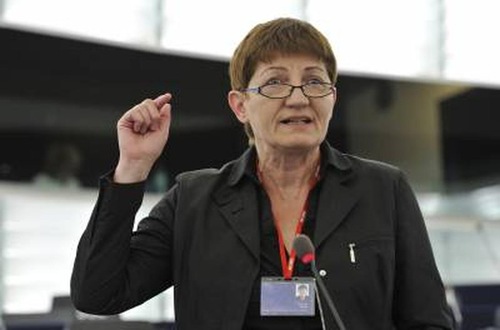 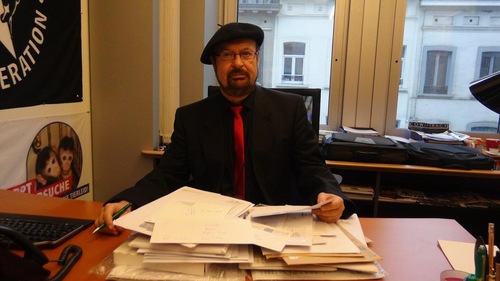 The letter pointed out that in July 1999, the Chinese Communist Party (CCP) launched an intensive, nationwide, systematic persecution designed to eradicate the spiritual practice of Falun Gong with the principles of Truthfulness, Compassion, and Forbearance.

The letter also cited from the 2016 annual report from USCIRF (United States Commission on International Religious Freedom) that thousands of Falun Gong practitioners were arrested or sent to brainwashing centers, reeducation-through-labor camps, detention centers, prisons or other detention facilities in 2015. In addition, despite the fact that they comprised the majority of the prison population, they received the longest sentences and the worst treatment.

The two MEPs stated that the CCP has been attempting to extend the persecution of Falun Gong overseas through diplomatic, political, and economic means, including the incentivizing and pressuring of authorities of the Republic of Korea and the Kingdom of Thailand to deport fleeing Chinese Falun Gong practitioners back to China.

A week before this letter, more than half of the MEP’s had co-signed Written Declaration (2016/WD48) on July 12, 2016. The written declaration requires the European Parliament to take action to stop state-sanctioned organ harvesting in China.

The letter said that a new investigation report entitled An Update to 'Bloody Harvest' & 'The Slaughter' by human rights attorney David Matas, former Canadian Secretary of State for Asia-Pacific David Kilgour, and China researcher and journalist Ethan Gutmann, as well as several new investigation reports of the WOIPFG, such as The Final Harvest: A Comprehensive Investigation into the Chinese Communist Party's Live Organ Harvesting of Falun Gong Practitioners, have concluded that millions of Falun Gong practitioners have been systematically killed for their organs by the CCP.

The letter called on the People's Republic of China to accept the exercise of jurisdiction by the International Criminal Court in the Hague according to Art. 12 III of the Rome Statute of the International Criminal Court, and to cooperate with the Court without delay or exception, in further accordance with the Rome Statute, in order to bring Jiang Zemin to justice for his grave crimes against Falun Gong practitioners. 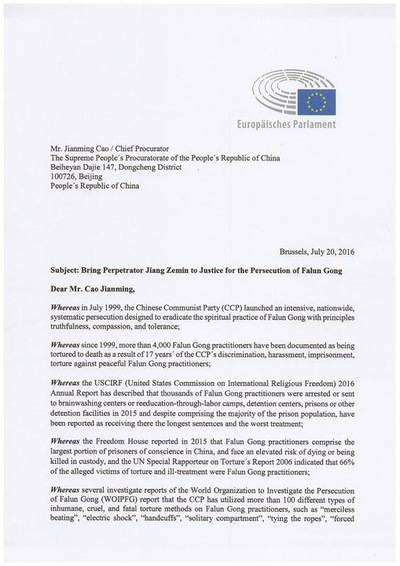 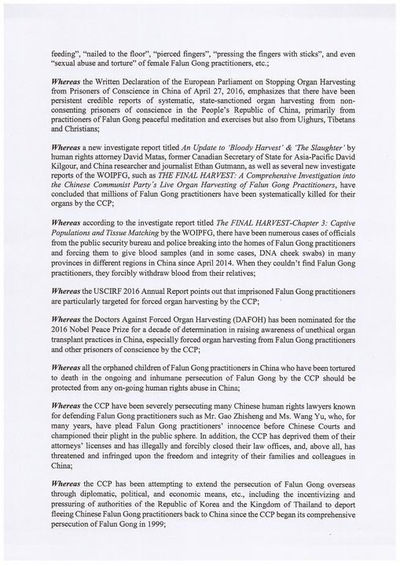 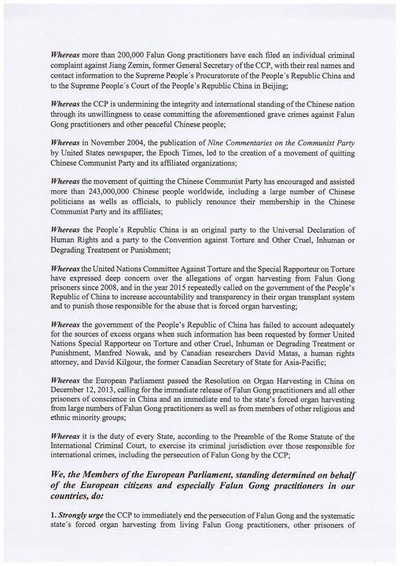 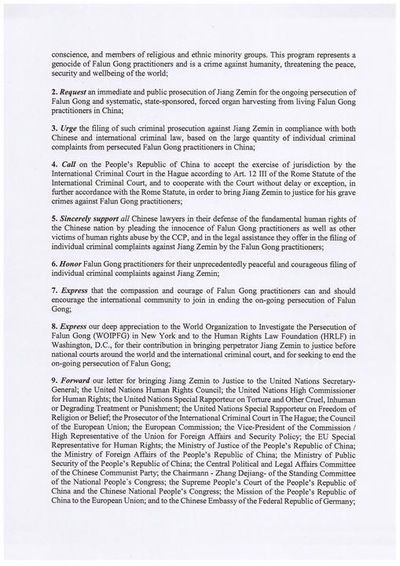 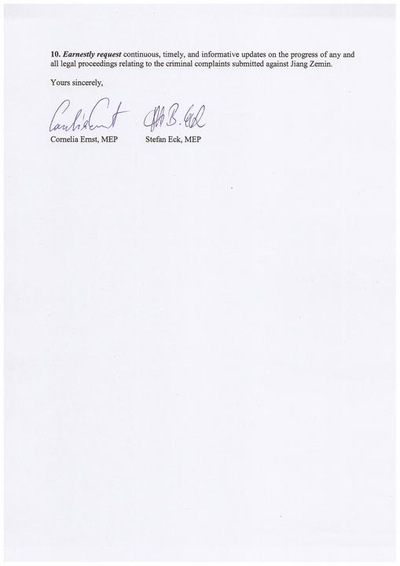