(Minghui.org) Criminal complaints against former Chinese dictator Jiang Zemin have not slowed down in Shandong Province. In Pingdu City alone, 1,658 residents have signed letters against Jiang from March to April 2016. The previous month, 1,115 letters of accusation were delivered from February to March 2016. 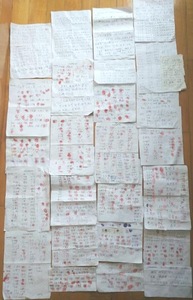 An orchard farmer agreed to sign the petition upon hearing about the case to bring Jiang to justice. “Back in those days (when Jiang was in power), we planted a bit of ginger between the apple trees. We were ordered to pay a farm tax and an orchard tax. It's really hard for us farmers to make a living,” he said.

“If you have a tractor, you need to pay a vehicle tax even if you don't use it often,” said a middle-aged lady next to him.

Three laborers were working on door frames. When told that people throughout the whole country were signing a petition to bring Jiang Zemin to justice, the laborers wanted more information. “He is dying. How can we try him?” one man asked.

“In any case, he has to take responsibility for the crimes he committed. Now, we need upright people to vote and put him on trial,” a practitioner replied.

“Good. I will sign. We need to bring him to trial,” said another person. All three people signed and put their thumbprints next to their signatures.

One driver said, “You guys take the lead; then let me sign to support you.” A female vegetable vendor said, “Jiang Zemin is so rotten. We should sue him.”