(Minghui.org) "The guards burnt me with cigarette butts and savagely beat me. My rib was broken, my buttock was smashed, and there was blood in my urine.”

“In the middle of the night, they sent me to the hospital. On the way, they checked frequently in the car to see if I was still breathing. When the doctor asked what happened to me, they lied and said my injuries were self-inflicted."

Above is an excerpt from Mr. Bai Hongyuan's criminal complaint against Jiang Zemin, the former Chinese Communist Party leader who ordered the violent persecution of Falun Gong.

Mr. Bai, 44, from Zhengzhou, Henan Province, recounted the above torture he suffered at Dagang Detention Center in Tianjin after he was arrested for appealing for the right to practice his spiritual belief of Falun Gong in June 2000. Six months after the torture, he was sentenced to three years of forced labor.

During the 17-year persecution of Falun Gong, Mr. Bai was arrested four times, placed under house arrest for six months, and sentenced to a forced labor camp twice. He was on the verge of death twice as a result of torture in state custody.

Mr. Bai filed a criminal complaint against Jiang Zemin to the Supreme People's Procuratorate on June 12, 2015, holding him responsible for the torture, detention, and imprisonment he suffered over the years.

While he was detained at Baimiao Forced Labor Camp in 2008, guards locked his hands behind his back, choked him, force-fed him concentrated salt water, and shocked him with at least eight electric batons on sensitive parts of his body, which left bruises all over. Guards also forcibly administered nerve-damaging drugs.

Mr. Bai fell into a deep coma after ten days of torture. He had respiratory and kidney failure and was sent to the intensive care unit.

Fearing that he would die soon, the guards asked his family to take him back home.

At home, he woke up a few days but was paralyzed, incontinent, and vomiting blood. He also suffered severe memory loss and had difficulty expressing himself.

Under extensive care by his family, his health gradually recovered, but his speech and movements were very slow. The police continued to harass him periodically.

In 2012, Mr. Bai was arrested again on the street. The police ransacked his home and interrogated him. To torture him, they hung him up, forced him to split his legs, and stretched his limbs to the extreme. Two weeks into his detention, he was transferred to a brainwashing center and subjected to further abuse. 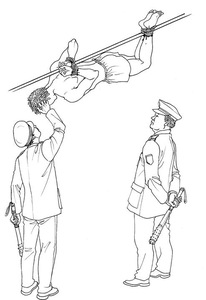 Torture reenactment: tied upside down on a stick